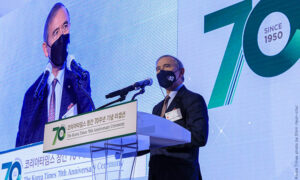 Good evening, everyone. Speaker Park, Prime Minister Chung, fellow ambassadors, Korea Times President Oh, and other distinguished guests, it’s an honor to be with you today to fete the 70th Anniversary of the Republic of Korea’s longest-running independent English-language newspaper, The Korea Times.

We are here to celebrate the freedom of speech and the freedom of the press, and the power that those inalienable rights confer on a country to choose democracy, to choose its own path forward, to determine its own destiny. These are values that the peoples of many countries here, including the United States and the Republic of Korea, share. Without a free media, a society can never reach its fullest potential. To The Korea Times, I say thank you for the role you continue to play in helping society further these democratic ideals. Democracy isn’t always an easy journey, it’s often raucous and discordant, and there is no shortage of competing, passionate views. But, I believe, it’s a necessary journey to form a better and more just society.

A few months before The Korea Times was established, our two nations’ commitment and resolve to democracy was put to the test as we fought side by side with the sending states against invasion from the north. Our fight to protect the right of this Republic to determine its destiny continues to shape the partnership between the United States and the Republic of Korea today.

The 70th anniversary of the outbreak of the Korean War, which the ROK and the sending states have made every effort to commemorate in spite of the COVID-19 pandemic, has given us an important occasion to reflect on this rich and compelling history of the U.S.-ROK Alliance…forged in blood in the crucible of war. The 70th anniversary of The Korea Times reminds us that the fight for democracy has continued in other equally crucial ways off the battlefield.

Over the past seven decades, South Korea transformed itself into a major economy, an “innovation nation” and powerhouse in the region, exporting everything from ships to cutting-edge cell phones, from COVID testing kits to “scientific best practices”, and from ramyeon to “Parasite” to “Dynamite” – that’s BTS, for those of you who aren’t in the know! All throughout, The Korea Times continued to fight for democracy and the freedom of speech, both through the soft power of South Korea’s rich culture and speaking its truth to authority on its pages and digitized screens.

Now, we look to the future. South Korea continues to take a larger and larger role in the region and in world affairs. We see the further spread of our shared fundamental values, and the hope and the security that brings not only to our Alliance, but to the whole of the Indo-Pacific region. At the center of it all, we see that the freedom to express one’s views protects us and makes us better.

I have no doubt in my mind that The Korea Times will continue to play that very important role as people from around the region and the world look to South Korea. Congratulations to The Korea Times on 70 years. I wish you countless more. Thank you.