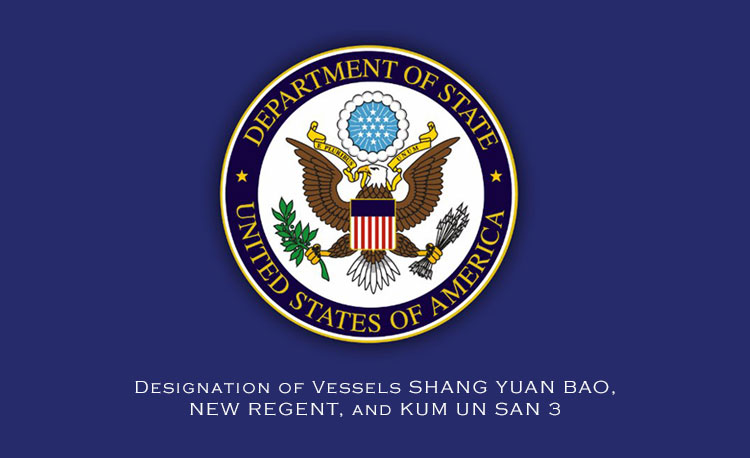 The United States, along with partners, welcomes the October 16 announcement by the 1718 Committee on UN designations of vessels SHANG YUAN BAO, NEW REGENT, and KUM UN SAN 3 for engaging in UN-prohibited ship-to-ship transfers of refined petroleum to North Korean ships. We call on the 1718 Committee to designate any vessels under consideration that have shown to be involved in ship-to-ship transfers. The UN is designating the ships for a port entry ban and deflagging. This action is necessary as North Korea’s illicit shipping activities continue, despite UN prohibitions on ship-to-ship transfers of any goods or items to or from North Korean vessels of any goods or items going to or coming from North Korea.

The United States notes that this action follows recent announcements from Canada, France, Japan, and the United Kingdom regarding monitoring and surveillance activities to detect UN-prohibited illicit North Korean maritime activities, with a particular focus on detecting and disrupting ship-to-ship transfers of refined petroleum to North Korean tankers in the East China Sea. The United States is also releasing imagery that demonstrates the results of this coordinated, multinational initiative, which includes these countries, along with Australia and New Zealand. In support of this initiative, the United States has deployed aircraft and surface vessels to detect and disrupt these activities.

UN Member States are required to prohibit persons or entities subject to their jurisdiction from engaging in ship-to-ship transfers. The United States will impose sanctions on any individual, entity, or vessel supporting North Korea’s illicit activities.