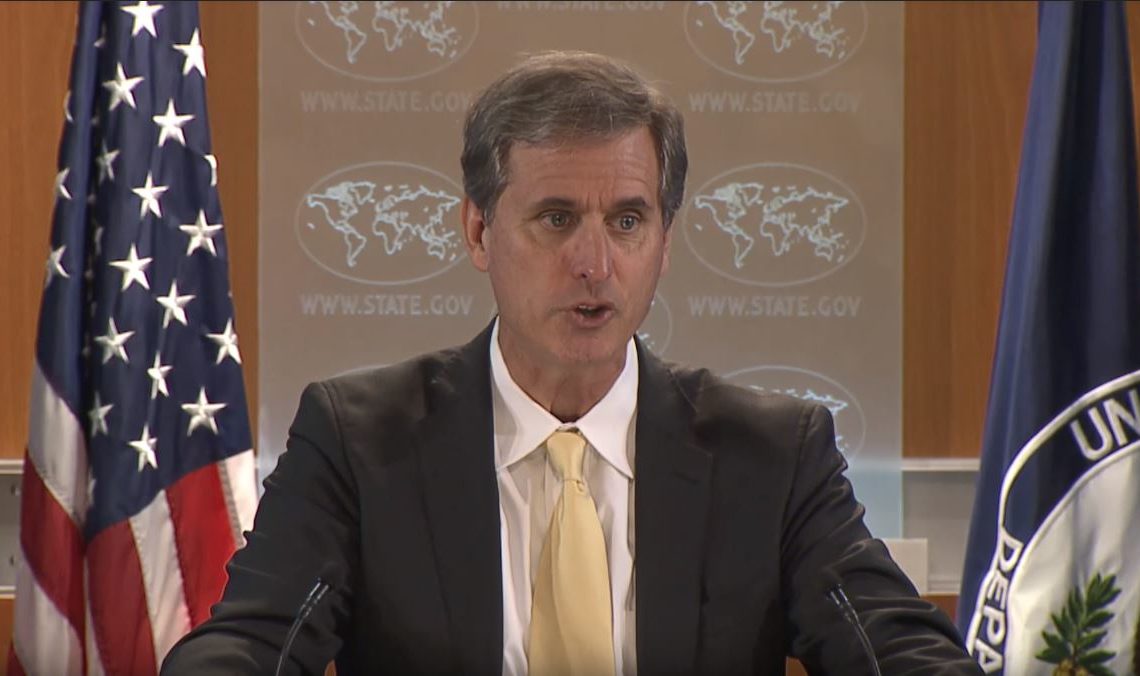 MS NAUERT: Next, I would like to introduce you to one of the – our other deputy assistant secretaries. Come on up here. This is Scott Busby. Scott works for our DRL Bureau, which is Democracy, Human Rights, and Labor. He’s here to talk about the DPRK, North Korea. Today, consistent with the North Korea Sanctions and Policy Enhancement Act of 2016, the State Department has released its third report on North Korea human rights abuses and also censorship. In conjunction with the report, the Department of Treasury sanctioned persons and entities identified in this report. And our Deputy Assistant Secretary Mr. Busby will talk a little bit about that and take a few of your questions, and then I’ll start the regular briefing.

MR BUSBY: Well, thank you, Heather. And good afternoon, everyone. Today, as part of our continuing efforts to promote accountability for North Korean officials, as Heather said, we’re releasing our third report on serious human rights abusers from the DPRK. And this report identifies seven individuals and three entities as responsible for serious human rights abuses or censorship in North Korea.

In conjunction with the report, the Treasury Department has added these 10 North Korean individuals and entities to the Specially Designated Nationals and Blocked Persons List. Both actions are consistent with the North Korean Sanctions and Policy Enhancement Act of 2016. Like the two prior reports, this report shines a spotlight on serious human rights abuses committed by the DPRK regime, including extrajudicial killings, forced labor, torture, prolonged arbitrary detention, as well as rape, forced abortions, and other sexual violence.

In particular, this report focuses on the many human rights abuses that underwrite the regime’s weapons program, including forced labor, re-education through labor camps, and overseas labor contracts. Thousands of North Koreans are sent abroad every year to work in slave-like conditions, earning revenue for the regime. The government also deploys security officials abroad to monitor the activities of North Korean citizens and to forcibly repatriate individuals who seek asylum. This report includes individuals and entities responsible for these types of abuses.

With these efforts, we aim to send a signal to all DPRK Government officials, particularly prison camp managers and mid-level officials, that we can and we will expose human rights abuses and censorship in the DPRK and that these individuals will suffer consequences for such actions. Thank you very much.

QUESTION: I have a quick question. There’s one individual on the list who’s based in China at the consul general in Shenyang. I’m not sure how to pronounce that. But what do you expect China to do as a result of the U.S. pointing to this individual? Do you expect them to take action against them? What’s the expectation?

MR BUSBY: This individual was included in the report because of his responsibility for facilitating the return of North Korean asylum seekers to North Korea. His case has been raised with China. I don’t want to speak for what China may or may not do with his case, but we’ve brought it to their attention.

QUESTION: What are the possibilities for what they might do?

MR BUSBY: The range of possibilities, right, including expelling from the country.

MR BUSBY: Well, a decision like that is obviously not one that the U.S. Government takes. That’s a decision that can be taken by any number of other entities. So again, I don’t think I can speak for what those entities may or may not do with regards to Kim Jong-un.

MR BUSBY: I’d have to refer you to our Treasury Department for that sort of information. I don’t have those sorts of details.

QUESTION: And just one follow-up on the question about potential sanctions: If you don’t know or can’t tell us what kinds of action China might take, and you don’t know, in fact, whether China will actually take any action, why is there any reason to believe that there will be any accountability for the individual that you’ve identified, or any consequence?

MR BUSBY: Again, the report is just out today. We have communicated the results of this report, the data in this report, with the Chinese and with other governmental authorities in the region. It’s now up to China to decide what to do with it.

QUESTION: Have they ever previously acted against a North Korean official who has been similarly identified?

MR BUSBY: This is the first such individual mentioned in a report like this, but —

QUESTION: But surely you’ve raised other issues with them in the past, or other individuals.

MR BUSBY: Yeah. I don’t know off the top of my head. I couldn’t tell you.

MR BUSBY: I could tell you off the top of my head, but we could get back to you.

QUESTION: Great. It’d be interesting to know if they ever have acted.

QUESTION: Hi. I wanted to ask – I believe that this is not the first time you have decided to target mid-level officials within the North Korean Government, and I believe the philosophy was the idea that people would feel a different level of responsibility in that mid-level position. Have you seen any effect by undertaking that – targeting that particular level of people within the North Korean Government?

MS NAUERT: Thank you so much. Deputy Assistant Secretary Scott Busby, thank you for coming in.