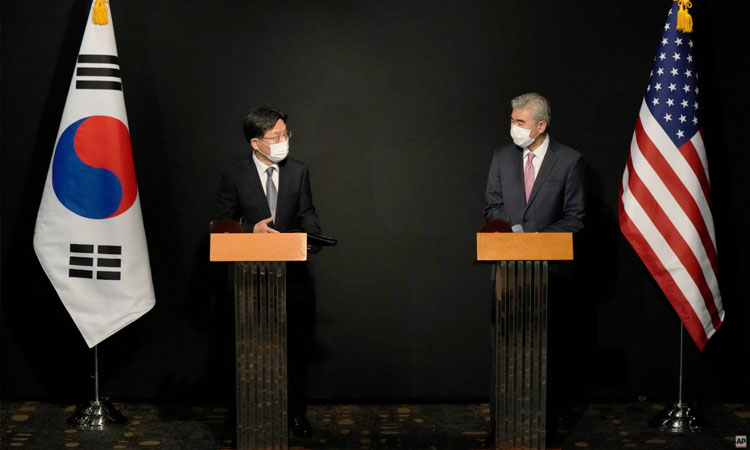 Thank you, Special Representative Noh. It’s great to be back in Seoul as part of our ongoing and close coordination on the DPRK.

Of course, we saw each other this week in Washington for a trilateral meeting with Japanese Director General for Asian Affairs Takehiro Funakoshi. That was an opportunity to further deepen U.S.-ROK-Japan cooperation to maintain regional peace and security.

In our meeting today, I reiterated to Special Representative Noh Washington’s strong commitment to the defense of the ROK and to exploring sustained and substantive diplomacy with the DPRK. Our goal remains the complete denuclearization of the Korean Peninsula, and we are working closely with our ally, the Republic of Korea, toward that end.

That’s why Pyongyang’s recent ballistic missile test – one of several in the past six weeks – is concerning and counterproductive to making progress toward a lasting peace on the Korean Peninsula. The launch violates multiple UN Security Council resolutions and poses a threat to the DPRK’s neighbors and the international community. We call on the DPRK to cease these provocations and other destabilizing activities and instead engage in dialogue.

We remain ready to meet with the DPRK without preconditions, and we have made clear that the United States harbors no hostile intent toward the DPRK. We hope the DPRK will respond positively to our outreach.

We are also prepared to work cooperatively with the DPRK to address areas of humanitarian concern, to help the most vulnerable North Koreans.

I look forward to continuing to work with Special Representative Noh to explore different ideas and initiatives, including the ROK’s End-of-war proposal as we continue to pursue our shared objectives on the Peninsula. The United States is at its strongest when we work in partnership with allies, and the U.S.-ROK Alliance is at the forefront. There is no challenge too great for our nations to overcome together, and we will work toward an Indo-Pacific region that is open, free, and secure.