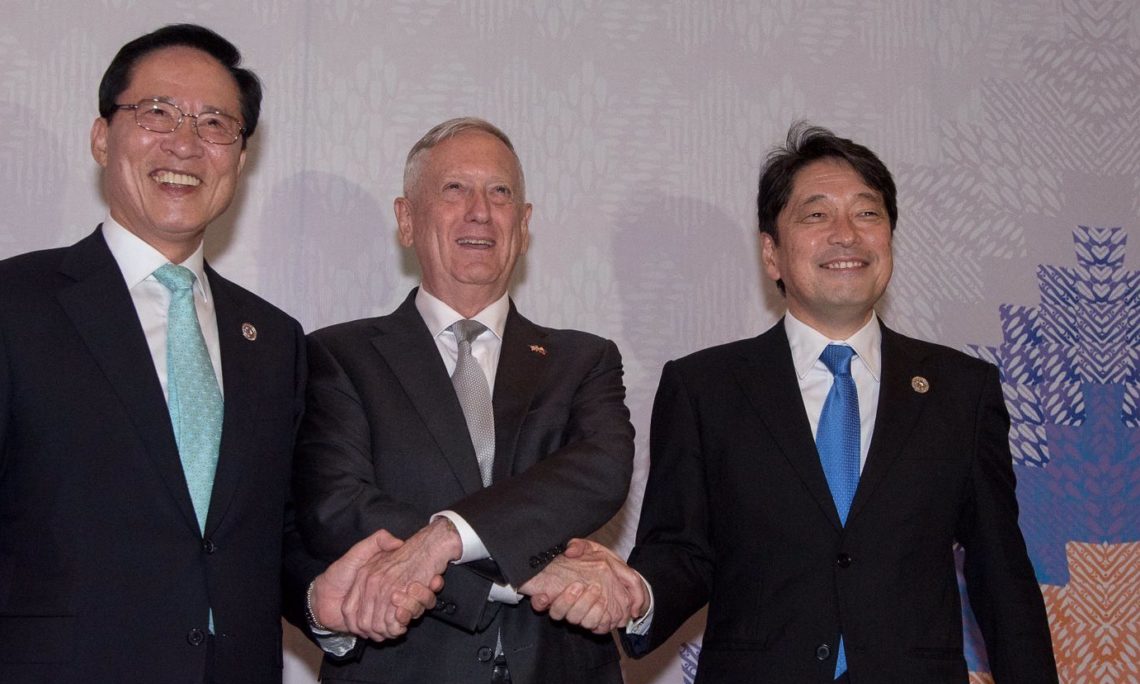 SECRETARY OF DEFENSE JIM MATTIS:  Minister Onodera and Minister Song, military officers, members of the delegations gathered here today, first, I’m sure I speak for all of us that we are grateful for the Philippines hosting this forum that allows us to get together.

Minister Onodera, Minister Song, I’m honored to join you, two valiant, steadfast, allied nations who are committed to upholding our shared interest and values.  And we will stand together as trouble looms.

We have made great strides in strengthening trilateral defense cooperation, recognize the need to build the closest possible working relationship and transparent communications between us.

This is now the ninth trilateral ministerial between our three nations.  And this underscores the enduring nature of our longstanding trilateral partnership, which is a linchpin of peace and stability in the Asia Pacific area.

But I want to thank you both, ministers, for your leadership and for your unyielding commitment to cooperation and regional security.

Today we will discuss candidly the current security environment — as only trusted allies can do with one another — reinforcing a rules-based international order, respect for international law and freedom of navigation for all nations’ commercial benefit.

North Korea’s provocation threaten regional and global security despite unanimous condemnation by the United Nations Security Council.  As United States Secretary of State Tillerson has said, quote, “Our goal is the complete, verifiable and irreversible denuclearization of the Korean Peninsula,” unquote.

And, I look forward to receiving your insight and your wisdom on this grave security concern.

Our security is interconnected and we speak with a single voice in holding DPRK accountable.  And America’s commitment to the defense of the Republic of Korea and Japan, two of our most respected allies, remains ironclad because we recognize we are stronger together.  Together we remain committed to forging a future-oriented defense relationship based on mutual respect and shared values.

And, ministers, I look forward to today’s discussion.  Thank you.

SOUTH KOREAN DEFENSE MINISTER SONG YOUNG-MOO (THROUGH TRANSLATOR):  Well, first of all, I am glad to have the opportunity to be here today and have the pleasure to meet both Secretary Mattis and Minister Onodera in person.

And over time our trilateral security cooperation between the Republic of Korea, the United States and Japan has played the critical role of deterring the North Korean nuclear and missile threats as well as maintaining the peace and stability in the Asia Pacific.

And I believe the critical nature of this trilateral cooperation is underscored by the fact that there was a trilateral summit held twice at the occasion of the G-20 Summit in Germany as well as the United Nations General Assembly in New York.  On top of that, we’ve also had two defense ministerial meetings on the occasion of Shangri La Dialogue and this year’s ADMM-Plus here today.

I look for, as Secretary Mattis has said, in order to compel North Korea to come out to a path of denuclearization.  I look forward to having an honest and candid conversation between the three ministers and the secretary.

JAPANESE DEFENSE MINISTER ITSUNORI ONODERA (THROUGH TRANSLATOR):  Thank you very much for this occasion.  This is my first time attending this trilateral defense ministerial.

It has been only about five months since the last trilateral defense ministerial at the Shangri La Dialogue.  Over these months, DPRK repeatedly launched ICBM — (inaudible) — ballistic missiles, as well as ballistic missiles that overflew Japan.  North Korea forcibly conducted its sixth missile testing and we cannot rule out the possibly that North Korea tested a hydrogen bomb.

(Inaudible) — North Korea conducted a series of ballistic missile launches and nuclear tests since last year.  There have been six — (inaudible)  its nuclear and the missile capabilities.  Threat posed by North Korea was grown to unprecedented, critical and imminent level.  Therefore, we have to stay collaborated in defense responses to meet that level of threats.