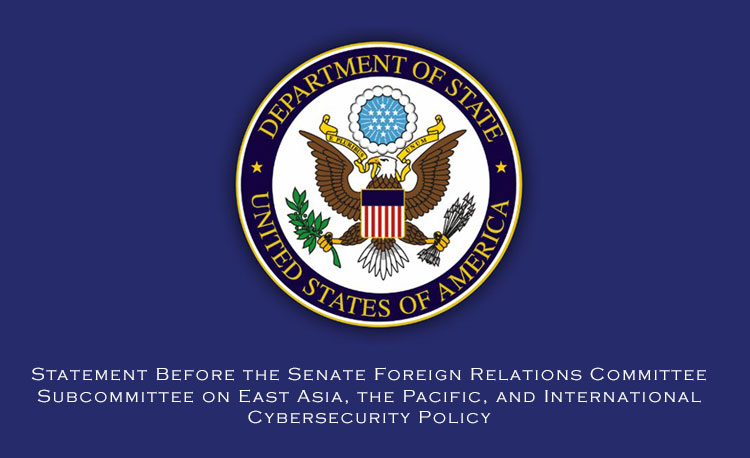 ARIA calls for “pursuing a peaceful denuclearization of the Democratic People’s Republic of Korea through a policy of maximum pressure and engagement,” which is the approach we are taking.  The United States remains ready to resume constructive discussions with North Korea on each of the four pillars of the Singapore Joint Statement.  Our goal is to achieve the final, fully verified denuclearization of the DPRK, as committed to by Chairman Kim in Singapore.  That includes transforming the U.S.-DPRK relationship, establishing a lasting and stable peace on the Korean Peninsula, complete denuclearization, and making progress on the recovery of remains.

As President Trump has said, sanctions remain in effect.  Relevant UN Security Council resolutions remain in full effect, and UN Member States are bound by the obligations they impose.  We also call on countries around the world to continue to take action to combat sanctions evasion.

Our steadfast alliances with Japan and the Republic of Korea have enabled decades of peace, prosperity, and development throughout the Indo-Pacific.  Both key allies are committed to maintaining a free and open Indo-Pacific and to pursuing denuclearization of the Korean Peninsula.  In line with ARIA, we work to deepen the trilateral security cooperation between us, including in missile defense, intelligence-sharing, and other defense-related initiatives.

Recent challenges in the relationship, stemming from historical grievances and trade and security-related actions, have created an increasingly unsafe and unstable security environment in Northeast Asia.  We have repeatedly expressed our concern with South Korea’s decision to terminate the General Security of Military Information Agreement (GSOMIA) with Japan.  The value of arrangements such as GSOMIA to U.S., South Korean, Japanese, and regional security was underscored again recently with North Korea’s Oct. 2 missile launches.

While our position has been that we will not serve as a mediator between our two allies, this certainly has not precluded extensive engagement.  We have been meeting frequently in both bilateral and trilateral settings to deliver clear messages to both sides and seek mutually agreeable solutions. We trust that our allies will prioritize our collective strategic interests, as they have in the past. [To watch the full testimony, click here.]