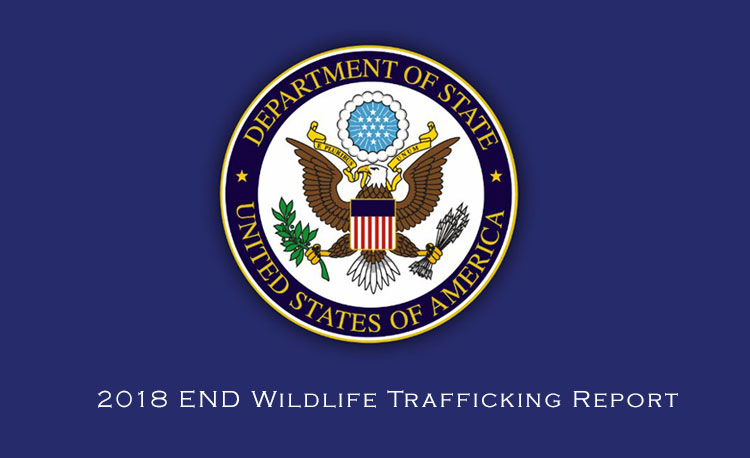 The Task Force on Wildlife Trafficking (Task Force), co-chaired by the Secretary of State, the Secretary of the Interior, and the Attorney General, brings together 17 federal departments and agencies to implement the National Strategy for Combating Wildlife Trafficking (the “National Strategy”). The U. S. government’s three-pronged approach to combating wildlife trafficking – strengthening law enforcement, reducing demand, and building international cooperation – deprives criminals of a key source of financing, reducing the criminal threat posed to U.S. citizens.

The Task Force’s work to combat wildlife trafficking is making a difference on the ground at home and worldwide. The Task Force ensures that efforts and activities are better coordinated across the U.S. government; efficiencies are identified and exploited, redundancies eliminated, and resources used more strategically; our international outreach continues to expand; and new areas of work are identified as a result of improved coordination with the intelligence community. Working in partnership with the private sector, local communities, and non-governmental organizations (NGO), the United States has led the way globally, securing agreements and commitments from governments and stakeholders at all levels to take urgent action. Highlights of Task Force efforts are included in the separate Strategic Review, as called for in Sec. 301(d) of the END Wildlife Trafficking Act.

The Department of State continued to work closely with the other agencies of the Task Force to employ both qualitative and quantitative information to identify Focus Countries and Countries of Concern, as defined in Section 2 of the Act, using the methodology developed for the 2017 END Act Report. Technical experts and scientists from Task Force agencies established a process to analyze wildlife trafficking information, and gathered a set of relevant and available data. This analysis included evaluation of data drawn from public reporting by U.S. government agencies, international entities such as the Convention on International Trade in Endangered Species of Wild Fauna and Flora (CITES), the International Union for the Conservation of Nature (IUCN), and the UN Office of Drugs and Crime (UNODC), and NGOs such as the Center for Advanced Defense Studies (C4ADS), TRAFFIC, the Environmental Investigation Agency (EIA), and Transparency International. Information from the required national assessments reinforced and augmented our previous findings.

Based on the analysis of interagency experts, the input from outside experts, and the availability, quality, and consistency of data, the Task Force employed the following process to identify Focus Countries:

Range States: The Task Force used information from IUCN and CITES, as well as U.S. experience implementing and enforcing the Endangered Species Act to generate a list of wildlife species that are of high conservation concern and are known to be illegally traded. Experts then used the IUCN Red List and other sources to determine the range states for biologically significant populations of these species.

Seizure Data: The Task Force compiled seizures of trafficked wildlife reported by the U.S. government since 2011, and added seizures that other countries reported to the CITES Secretariat. The seizures were analyzed in a manner that scored countries for being the source country for seized wildlife and wildlife products (and in some cases the transit or final destination if this information was known), but excluded from scoring the countries that successfully made the seizure.

The Task Force considered both seizures of illegal wildlife and wildlife products, as well as a secondary analysis of only those species identified in the range analysis, with countries being scored based on whichever analysis caused them to be ranked highest.

Recognizing that seizure data only capture a small but unknown percentage of all illegal wildlife trade and that much of that trade may not transit through a country with a strong customs enforcement system, the Task Force then considered additional data available for several key species.

Species Specific Data: The Task Force utilized the rankings listed in the 2016 CITES Elephant Trade Information System (ETIS) report of countries that play a significant role as a supplier, transit or consumer country. The Task Force also considered trade and market analyses conducted by NGOs for rhinos, reptiles, birds, and pangolins, representing some of the most trafficked species for which detailed information was available.

Risk and Enabling Criteria: The Task Force further considered risk and enabling criteria, including Transparency International’s Perceptions of Corruption Index; countries that are currently subject to CITES trade suspensions; and a Department of State analysis of the global transportation network that sought to identify key nodes and chokepoints for illegal wildlife trade.

Country-Specific Analysis: The above data sets were scored in a weighted manner, which led to a list of countries where further country-specific analysis was needed. Factors such as range states, seizures, and species-specific criteria were weighted more heavily than additional risk and enabling factors.

Task Force agencies, including those at U.S. overseas missions, reviewed the initial analysis and provided additional information that was often only available locally. These country-specific analyses helped to round out the global data, including by providing information on additional species such as felines, primates, and marine species. Agencies also considered the trajectory of wildlife populations and trafficking’s impact on that trajectory, government and private sector efforts to prevent illegal trade, and the presence of legal or poorly regulated domestic markets for species threatened by wildlife trafficking. Each U.S. mission located in a 2017 Focus Country completed a detailed assessment specifying available resources, local laws and political commitment, capacity, and areas of weakness. They subsequently created mission strategies to combat wildlife trafficking challenges specific to each Focus Country.

The Task Force further evaluated whether governments had recently taken steps to improve legislation, regulations, and/or enforcement and other trends such that the country is stepping up its efforts to combat the illegal trade in wildlife.

The Department of State, in consultation with the Departments of the Interior and Commerce as well as other agencies of the Task Force, determined that, although we are working to fill them, many of the previously identified information gaps remain. In addition, given the timelines established in the END Act for the completion of the assessments and strategies, there was limited new information to support a new comprehensive analysis. In light of this, the Task Force determined that there was no justification for revising the list of Focus Countries in 2018; the same is true for the Countries of Concern. Each country listed continues to be a “major source of wildlife trafficking products or their derivatives, a major transit point of wildlife trafficking products or their derivatives, or a major consumer of wildlife trafficking products.”

Methodology for Identifying Countries of Concern

To identify Countries of Concern as directed by Section 201(b) of the Act, the Department of State, in consultation with the Departments of the Interior and Commerce and other agencies of the Task Force, reviewed publicly available information as well as classified material that indicated the following governments actively engaged in or knowingly profited from the trafficking of endangered or threatened species. A review of classified, NGO, and open source reporting found insufficient evidence to designate new Countries of Concern. The situation in the Countries of Concern designated in 2017 remains largely unchanged. This designation does not indicate all parts of the government are or have been involved, but there are serious concerns that either high-level or systemic government involvement in wildlife trafficking has occurred.

2018 Countries of Concern (in alphabetical order)