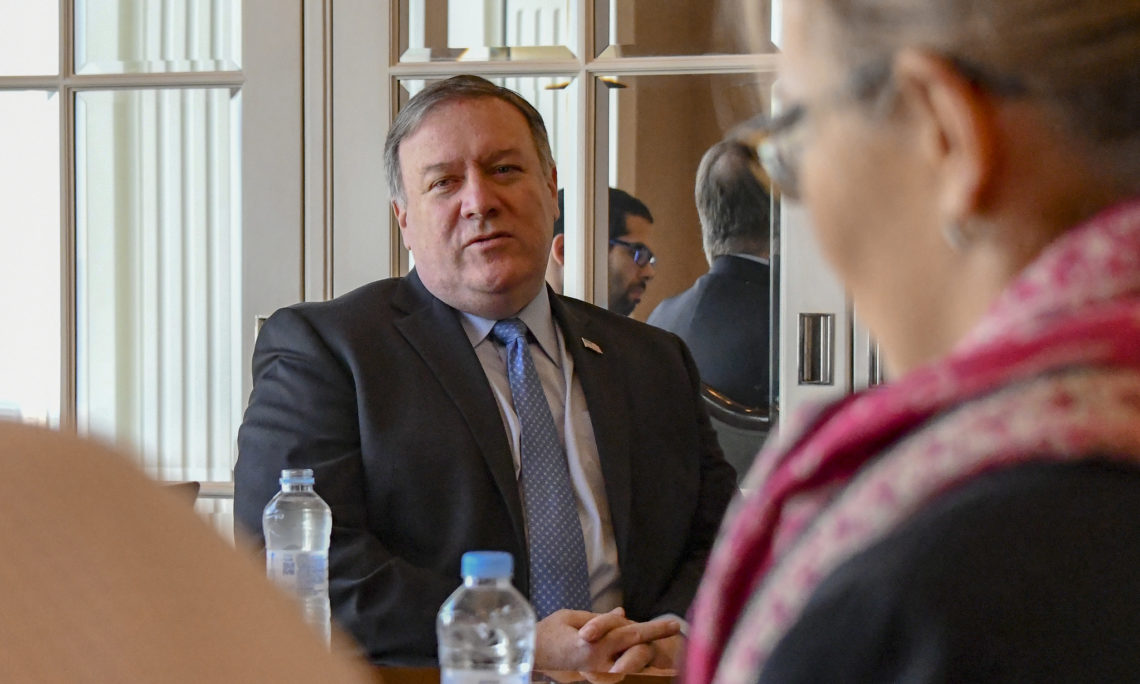 QUESTION: So how close are you guys on the logistics for a second summit?

QUESTION: Okay. You want to —

QUESTION: Are you at a point, though, where you think it needs the top – in other words, you could – you’re not going to – it’s not – you’re not in a position now to be able to get that done? It’s got to go to the very highest level? Is that where we are?

SECRETARY POMPEO: So a couple things that came out of this. One is – and I’ll let Steve maybe make a comment here too – we will be – what’s the right way? We will be having more frequent and higher-level working group discussions than we’ve had in some time on a set of issues. So that was important good news. I think Steve’s counterpart will be Choe Son-hui. And we think – we think that’s important too. So we’ll have a chance to meet here in between the summit date as well. So we really hope we can deliver some good outcomes when the summit takes place. But we do think, right, this is a place where, ultimately, some of these big, difficult issues have to be resolved by the nations’ most senior leaders, and we’re hoping to have those presented in a way that the two leaders can resolve them when they get together.

QUESTION: All right. Last one from me. But is this kind of like the Vienna invitation that you – in your statement from —

SECRETARY POMPEO: Yeah, it’s consistent with what we were seeking to do there.

QUESTION: But not necessarily Vienna for —

QUESTION: No, not for the summit, but I mean —

SECRETARY POMPEO: Yeah. No, no, I’m – that’s what I’m saying. I don’t know where those – I mean, Steve, you want to say anything about it? Yeah.

MR BIEGUN: Sure. Good morning. The – so last night I issued an invitation to my counterpart to meet as soon as possible. We’re actually working on specific dates and location, and I was reassured to see today in the KCNA statement that the DPRK likewise has fully endorsed the idea that working-level talks will begin as soon as possible. So talks for the sake of talks, obviously, are no great accomplishment, but we actually have a full range of issues now to talk about too. When you combine the commitments that came out of the joint statement between the North and South in – from the Pyongyang summit as well as the issues that Secretary of State Pompeo and Chairman Kim discussed yesterday, we’re starting to see a first wave of actions we can take on all four pillars of the Singapore communique, for sure, but that’s specifically on the issue of denuclearization as well. So we’re very much looking forward to that.

Some of that is actually not even going to be about the threshold question of whether we can do this. It’s more the modalities of how we do this, and we’re looking forward very quickly to work that out with our DPRK counterparts, and really begin in earnest the process of denuclearization to fill the vision the President and Chairman Kim had from Singapore.

QUESTION: Can I ask a quick follow-up on the Trump-Kim summit? Will – are you guys ruling out Pyongyang as a location for that? I ask because North Koreans yesterday mentioned that to me as a place they’d like to see it happen. And will it happen in the next month?

SECRETARY POMPEO: Can’t answer either of those questions.

QUESTION: No? Okay. And then I guess a follow-up on the statement that Heather put out last night. Do you guys have a date for when international nuclear inspectors will be allowed onto the Punggye-ri location?

SECRETARY POMPEO: As soon as we get it logistically worked out, Chairman Kim said he’s ready to – ready to allow them to come in, and there’s a lot of logistics that will be required to execute that, but when we get them we’ll put them on the ground.

QUESTION: And in terms of forward movement on the summit between Moon and Kim Jong-un, they agreed that international inspectors would be allowed onto the – which one was it?

SECRETARY POMPEO: You need to go back and reread. You —

QUESTION: No, they said international inspectors would be allowed into the Yongbyon site if the U.S. took corresponding measures.

QUESTION: So is there any forward movement on that?

SECRETARY POMPEO: We don’t have any comment on the – again, we’re not going to talk about where we are in these negotiations except for things we have agreed to release with the North Koreans.

QUESTION: Could I ask you, Mr. Secretary, you mentioned you would bring up the abductee issue with Chairman Kim. Is —

SECRETARY POMPEO: Yep. We – we raise third-country issues each time we travel. The importance of making sure that we resolve all the issues, right – one of the key pillars of the statement between Chairman Kim and President Trump was that we would have better relationships, confidence-building measures. We would fundamentally change the nature of North Korea’s relationship with the rest of the world. And so there are many issues, including the abductee issue, that will need to be addressed in order to achieve that. And I think Chairman Kim understands that fully.

QUESTION: A follow-up on some of the questions about inspectors. Has it been decided which organization is going to —

SECRETARY POMPEO: I don’t have any comment on that.

QUESTION: Who is the counterpart? I’m sorry, maybe I missed it. Who is going to —

MR BIEGUN: Well, we – this is all completely up to the North Koreans. They decide who sits across the table from us, but we have reason to believe it’ll be Choe Son-hui, the vice minister of foreign affairs.

QUESTION: Who is a known quantity?

MR BIEGUN: Mm-hmm, a very experienced negotiator, well known to our side, and somebody who we think can deliver good results for Chairman Kim and President Trump both.

QUESTION: I’m sorry, she was not there yesterday?

MS NAUERT: We’re heading to China today. Any questions about that?

Does anybody have anything on China?

QUESTION: Are you planning to meet with Xi Jinping?

QUESTION: And do you expect them to raise the full gamut of their unhappiness with the administration, or is this just going to be a North Korea thing?

SECRETARY POMPEO: No, it’ll be a much broader discussion than that. I expect they’ll also raise the issues that they’re happy with – lots of places we find overlap in our interests as well – and we’ll explore all the places we’re working well together and all the concerns that each country has.

QUESTION: Are you worried about the Chinese and Russians’ meeting with North Korea in any way hurting the advancement that you can make in your discussions with North Korea?

SECRETARY POMPEO: Chairman Kim was very clear yesterday in our conversation about the things that we need to do between the United States and the DPRK. That’s what we’re focused on.

QUESTION: And ahead of your meeting with Prime Minister Abe, you spoke about wanting to synchronize the countries on the situation in North Korea. Have – in the last two days, I mean, have you found that the U.S, South Korea, and Japan are on the same page or are there areas of concern or disagreement that you’re encountering?

SECRETARY POMPEO: I’ve never been involved in an international discussion where there weren’t differences of view, not only between governments but inside of governments, lots of thoughts. But if you look at the approach, we are in lockstep with each of those two countries in terms of how we approach achieving the results that everyone is aimed at. And so there’ll be tactical places where we’ll have debate and disagreement. That is a necessary component of getting to the best deliverable. But with respect to our relationships with the Republic of Korea and Japan on this issue, I have found that we are in lockstep on the most important issues and how to approach them.

QUESTION: I saw a couple of Japanese officials last night, so have you already briefed them?

MR BIEGUN: I did.

QUESTION: You did. And some officials were expecting that most likely you would fly back to Tokyo.

MR BIEGUN: Well, we’re moving on to Beijing, and from there we’re flying directly back to Washington, D.C. I’ve made a point to both our South Korean and our Japanese allies that I will be available before and after every discussion so that we’re in complete alignment and have full transparency between us on the discussions. Just for scheduling purposes, the Japanese – my Japanese counterparts were kind enough to fly here yesterday evening, and we had a late-night meeting where we went through the full gamut of discussions so that we can achieve exactly what the Secretary said, which is we stay on the same page on the big, important issues, and we are.

SECRETARY POMPEO: I should mention, so you can see from Steve’s first trip with me to Pyongyang and the work that he’s done already in advance of this, he is going to be at the very center of not only managing the relationship with North Korea and achieving the ends we are, but also making sure that we’re working with not only with the Republic of Korea and Japan, but there are many countries that have a deep interest – China, others.

SECRETARY POMPEO: Russia – that have deep interests in this set of issues. And Steve is going to take the responsibility to be working directly for me as the point person, making sure that we are communicating well, fully coordinated, we’re taking on information from them so that we don’t have disconnects between our allies and others with interests in making sure that denuclearization proceeds as quickly as possible.

QUESTION: It sounds like not very much sleep for you in the next couple months.

QUESTION: Critics are going to say you guys came here, you didn’t accomplish anything new on denuclearization itself. What’s your response to that? Did you just come to set up the Trump-Kim summit?

SECRETARY POMPEO: On the process we made significant progress, we’ll continue to make significant process, and we are further along in making that progress than any administration in an awfully long time.