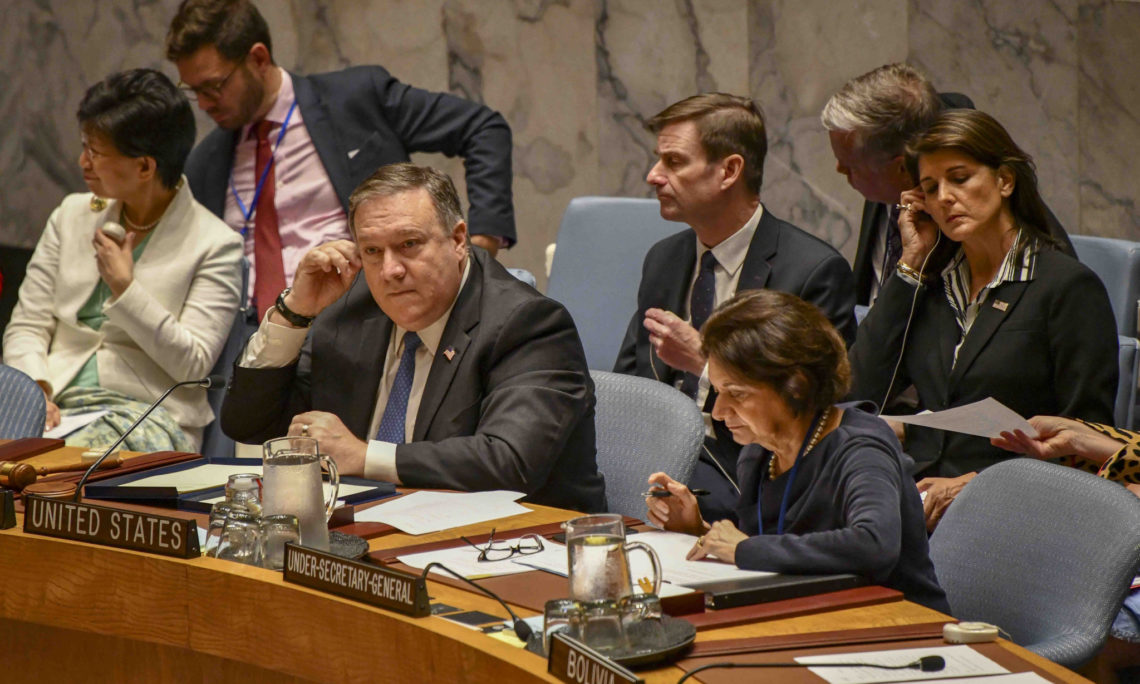 SECRETARY POMPEO: Good morning. The 8,363rd meeting of the Security Council is called to order.

The provisional agenda for this meeting is non-proliferation/Democratic People’s Republic Of Korea. The agenda is adopted.

In accordance with Rule 37, I invite the representatives of Japan and the Republic of Korea to participate in this meeting. It is so decided.

I am pleased to welcome the distinguished ministers and representatives gathered here this morning. The Security Council will now begin its consideration of item two on the agenda.

I shall now make a statement in my capacity as Secretary of State of the United States of America.

Time and time again over the past quarter century, the United Nations has made it clear: the world cannot accept a nuclear-armed North Korea. That’s not just the United States position. That is the world’s position.

Past diplomatic attempts to halt North Korea’s nuclear and ballistic missile development were unsuccessful. But now we’re at the dawn of a new day. Since taking office, President Trump has led the international pressure campaign that has resulted in the first significant diplomatic breakthrough in decades.

During President Trump and Chairman Kim’s historic Singapore summit, Chairman Kim committed to work towards the complete denuclearization of the Korean Peninsula. The two leaders share a common personal understanding of what must take place for the transformation of the United States-DPRK relations.

The United States continues to engage with North Korea to implement the commitments made in Singapore. Yesterday, I had a very positive meeting with Foreign Minister Ri Yong Ho to discuss how we can move forward on all four commitments in the Singapore joint statement. We also discussed a second summit between President Trump and Chairman Kim Jong-un.

We must not forget what’s brought us this far: the historic international pressure campaign that this council has made possible through the sanctions that it imposed. Until the final denuclearization of the DPRK is achieved and fully verified, it is our solemn collective responsibility to fully implement all UN Security Council resolutions pertaining to North Korea.

President Trump has made abundantly clear that if Chairman Kim follows through on his commitments, a much brighter future lies ahead for North Korea and its people, and the United States will be at the forefront of facilitating that bright future.

We want to see that time come as quickly as possible. But the path to peace and a brighter future is only through diplomacy and only denuclearization. That means any other path North Korea may choose will inevitably lead to ever-increasing isolation and pressure.

It is imperative for members of the United Nations to take that to heart. Enforcement of UN Security Council sanctions must continue vigorously and without fail until we realize the fully, final, verified denuclearization. The members of this council must set the example on that effort, and we must all hold each other accountable.

Particularly, we must all be accountable to enforce Resolution 2397, which lowered the annual cap on refined petroleum imports to North Korea. The United States has assessed – and we can say in no uncertain terms – that the cap of 500,000 barrels has been breached this year.

We continue to see illegal imports of additional refined petroleum using ship-to-ship transfers, which are clearly prohibited under the UN resolution. As UN Security Council members, we must convey to the captains of these ships, to their owners, and anyone else involved in these transfers that we are watching them and that they must cease their illicit activity.

We must all be accountable for cutting off North Korea’s illegal coal exports, which provide funds that go directly to its WMD programs.

And while sanctions remain part of the total approach we are pursuing to rid the Korean Peninsula of nuclear weapons, I want to finish on a positive note. We are well into a diplomatic process, and we hope – indeed, we want – to see this through to a successful end. I’m pleased that, based upon recent exchanges between President Trump and Chairman Kim, that the President has directed me to travel to Pyongyang next month to meet with Chairman Kim and to accelerate that process.

I want to reiterate that the future can be very bright for North Korea if it makes good on its commitment to final, fully verified denuclearization. It will lead to the positive transformation of the U.S.-DPRK relations, to greater prosperity for the North Korean people, and to an enduring peace.

In our vision for a free and open Indo-Pacific, nations are strong, sovereign, connected, prosperous, and at peace. But that vision for the region will never be complete if we fail to bring about this transformation on the Korean Peninsula. The Korean people, the region, and the world will never realize the full promise of the future if we do not seize this unprecedented diplomatic opening for peace.

I said at the beginning of my statement that we are at the dawn of a new day in the world’s relationship with North Korea. We do not yet know what that day will bring, but we are hopeful that the current breakthrough in diplomacy will yield a brighter future for North Korea and a safer world for all of us.

Thank you, and I look forward to the discussions.