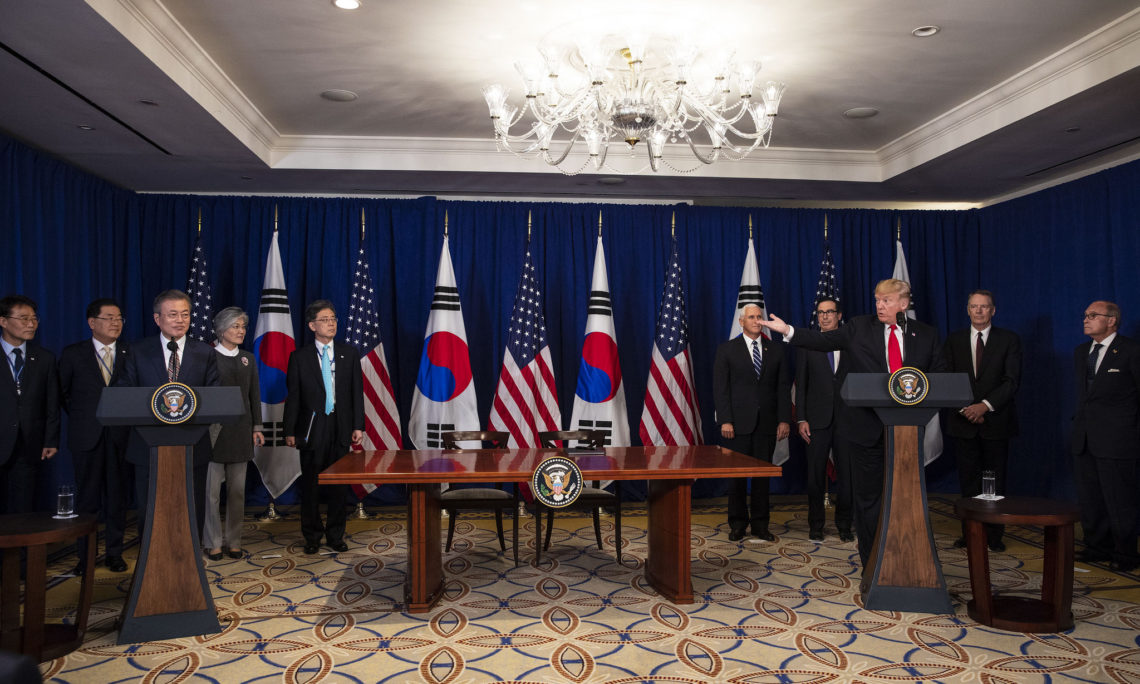 PRESIDENT TRUMP: Thank you very much. I’m thrilled to be here today with President Moon of South Korea to formally announce the successful completion of the new U.S.-Korea trade deal. It’s a very big deal. This is a great day for the United States and a great day for South Korea.

I want to thank President and Vice President. Mr. President, I’d like to thank you very much. I’d like to thank our great Vice President Pence for joining us today for the ceremony, and U.S. Trade Representative Bob Lighthizer for his incredible efforts. He’s worked very, very hard on this. Thank you as well to Treasury Secretary Mnuchin, and Director of National Economic Council Larry Kudlow, for their tremendous work. Everybody has worked very, very hard. This is long in coming. Many years, actually — I will say — in coming.

In a few moments, we will sign a document pledging that our countries will take the additional necessary steps to implement the new United States-Korea trade agreement. I want to express my gratitude to President Moon and his entire team for their dedicated efforts to reach, really, what we would call a historic milestone in trade — something that most people thought was not going to be happening.

From day one, I promised the American people that I would renegotiate our trade deals to ensure that our agreements were fair and reciprocal. For decades, politicians have talked about fixing broken trade deals only to do absolutely nothing about them. My administration is the first to actually keep our promise and deliver. And in addition to this deal, we have many in the works, and they’re fair deals. They’re reciprocal deals. And they make a tremendous difference to our workers, our companies, and to the United States as a whole.

These outcomes give the finest American-made automobiles, innovative medicines, and agricultural crops much better access to Korean markets. I think our farmers are going to be extremely happy. It was very limited as to what they could do and what they could send. And now it’s a open market, and they’re going to be sending a lot more farm products. That makes me feel very good. I love our farmers.

As a part of this agreement, we have also secured increased access to America’s auto industry. South Korea will double the annual number of American cars sold within. In other words, we used to sell a maximum of 25, and we wouldn’t even get to that number, and now we’re going to 50,000. We’re doubling it, per manufacturer. And that’s a doubling. So it’s 50,000 per manufacturer — cars. And that’s each year.

This agreement will reduce bureaucracy and increase prosperity in both of our countries. Workers in South Korea and America will find new customers and new opportunities to expand and grow. Our teams will be working hard to ensure that the terms of the deal are fully implemented.

As I said just a little while ago, we have an agreement to work out another summit. And we look forward to doing that. I’m going to be meeting with Chairman Kim in the not too distant future. The location is being worked on, the time is being worked on, and we’ll be announcing it.

As far as these negotiations, our two countries have set an example of friendship and cooperation for trade that rarely you see in this age. And I just want to tell you I’m very honored to be a part of it, and I’m honored to call you a friend. And I’m honored to say that the United States and South Korea have a great friendship together. Thank you very much.

Mr. President, thank you very much.

Today we have made amendments and modifications to improve the existing agreement. With the swift conclusion of the negotiations for the revision, uncertainty surrounding our FTA have been eliminated. And, as a result, companies from both countries will now be able to do business under more stable conditions.

In addition, I’m hopeful that this will provide us with a platform upon which our bilateral economic ties will be elevated to a higher level in a freer, fairer, and more mutually beneficial direction.

If our two countries could live up to the spirit embodied in the revised ROK-U.S. Free Trade Agreement, I believe that we will be able to expand mutual trade and investment, create new jobs, and usher in a better future. I hope the revision of the ROK-U.S. FTA will also contribute towards solidifying our cooperation in other fields.

I would like to thank President Trump for his leadership role in ensuring the successful conclusion of the negotiations for the revision of this agreement.

I would also like to commend all the members of our respective negotiating teams. Thank you.

(The agreement is signed.)

Q Mr. President, how confident are you that Brett Kavanaugh will be confirmed now?