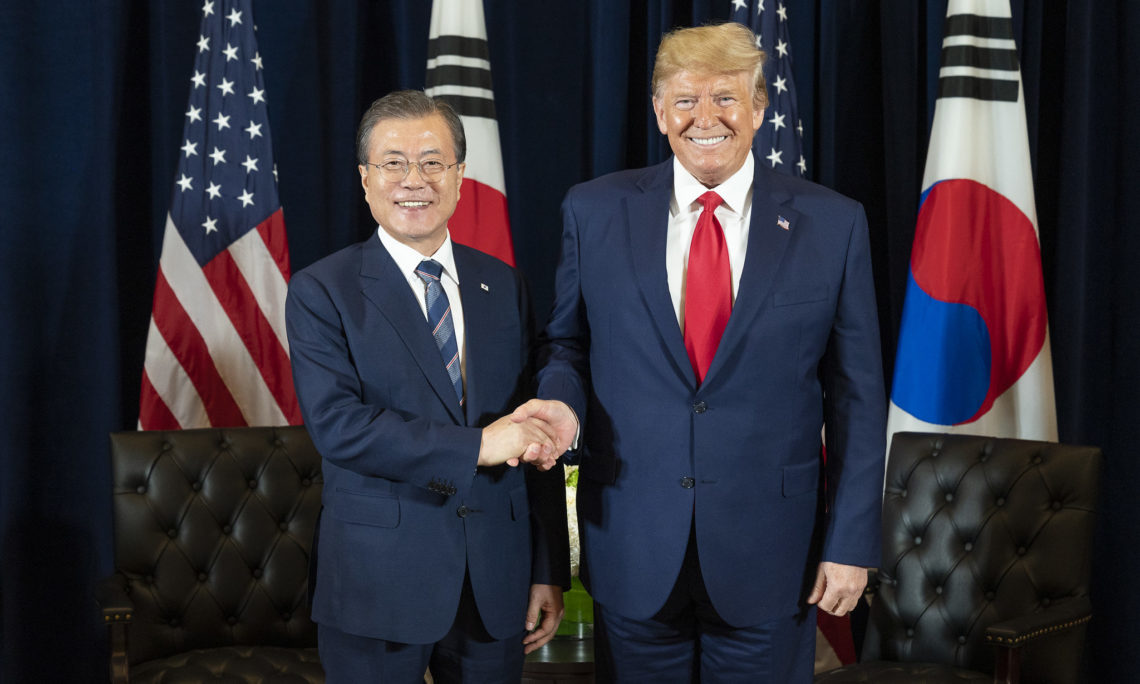 PRESIDENT TRUMP:  Well, thank you very much.  We’re pleased to be with President Moon of South Korea.  We have a long-term friendship, and we are making a lot of progress.  We are working on tremendous trade deals.  We — as you know, we’ve completed a trade deal, and that’s working out very well for both countries.  That deal is completed now, and it’s been in existence for — solidly in existence for six months.  And it’s been very good.

And we intend to do some additional things on trade.  Of course, we’ll be talking about North Korea.  We’ll be talking the purchase of equipment.  South Korea is one of our largest purchasers of military equipment.  And we’re working together very well.

PRESIDENT MOON:  (As interpreted.)  Mr. President, it’s a great pleasure to meet you again three months after our last meeting.  Your visit to Panmunjom will go down as a historic moment that embodied peace through action.  And I have to say that I always marvel at your imagination and bold decision-making.

Thanks to your leadership, we have been able to achieve great progress in terms of inter-Korean relations.  And this has also led to a dialogue between the United States and North Korea.  And soon, I will be expecting the working-level negotiations between the United States and North Korea to prepare for the third — your third summit with Chairman Kim to resume — to be resumed soon.

And when you have your third summit with Chairman Kim, maybe I hope that this will go down as a truly historic moment in world history.  This will be a great achievement that equals a great transformation in terms of a complete denuclearization on the Korean Peninsula.

During the time I have been working together with you, the ROK-U.S. alliance has been evolving in a great way, especially in the economic field.  We have been able to revise a bilateral free trade agreement, and that has been a great success, while many Korean companies are increasing their investment in America.

And during the course of my visit to New York, we’ll be signing the deal to increase the import of LNG from America, while we’ll also be signing a deal regarding a joint venture between a Korean motor company and an automotive vehicle company in America.  So I believe that all of this will come to reinforce our already strong alliance.

And furthermore, I do look forward to engaging in candid discussions with you today on how we could truly make great progress in our alliance in other aspects as well.

PRESIDENT TRUMP:  Thank you very much.

Q    What’s it going to take to have a third summit with Chairman Kim, sir?

PRESIDENT TRUMP:  Well, we’ll see.  Right now, people would like to see that happen.  I want to know what’s going to be coming out of it.  We can know a lot before the summit takes place.

We had, really, two very successful summits.  There’s been — as you know, there’s been no lessening of the sanctions.  There’s only been an increasing of the sanctions.  But very importantly, we have our hostages back.  And that was a very big deal.  And we got our hostages back.  We have the remains of our great heroes from the past back — a lot of them.  And they’re coming in, and they actually have a lot of them ready to start coming in again.

So, a lot of things have happened.  Plus, there’s been no nuclear testing at all for the last quite a long period of time, at least that we can detect.  And the relationships have been very good.

Q    Mr. President, for guns, do you plan on announcing a gun plan in the coming days?  And if so, is it going to include background checks?

PRESIDENT TRUMP:  Well, we’re working very much with the Republicans, and we’re working also with the Democrats.  But a lot of the Democrats are wasting their time on nonsense, on pure nonsense.  So they don’t have much time to work on guns, unfortunately.  If they did, it would be probably pretty easy to do.  But we always have to protect our Second Amendment.  It’s very important.

But the Democrats are really just wasting so much time on — on nonsense, on junk.  And if they focused on this, they could get it done.  But we have to protect our Second Amendment.  We have to protect people that want and need guns.  And we have to keep guns out of the hands of crazy people and sick people.  Very simple.  It’s not very complicated.

Q    For North Korea and the denuclearization talks.

So we’re not looking at any actions.  We have a good relationship with Kim Jong Un.  We’ll see what happens.  Maybe we’ll be able to make a deal.  Maybe not.

Q    Mr. President, I meant the sanctions first.  I beg your pardon.

Q    Two rockets just landed in the Green Zone in Baghdad.  Do you see this as an escalation in the Middle East?  And could —

PRESIDENT TRUMP:  I don’t know anything about it.  You just told me it’s breaking news, so I’ll have to see it.  You know, right now, I’m here.  I haven’t heard it.

PRESIDENT TRUMP:  When did this happen?

Q    Just now, but this is not the first time.  Many rockets landed before.

Q    But are you worried about the U.S. embassy in Baghdad — the security there?

PRESIDENT TRUMP:  We’re going to look into it.  I know nothing about it.  You just told me it’s breaking, so therefore I assume it’s relatively new, like within the last four days.

Q    Mr. President, do you plan on discussing the North Korean short-range missile tests with your counterpart?

Q    And, Mr. President, yourself: Do you have any comment —

PRESIDENT TRUMP:  I will be discussing that.

Q    Can we hear from President Moon if he is troubled by the short-range missiles and if he’d like to see you maybe try to stop it from happening — talk to Chairman Kim?

PRESIDENT TRUMP:  Well, we’ll take a look at it.  We’re going to talk about it.  But I didn’t really discuss that with Kim Jong Un.  That was never a part of our discussion.  We did discuss nuclear testing and other things.  And, frankly, he’s lived up to his word on those things that we discussed.  And we actually signed an agreement in Singapore.  We actually had two very good meetings.

You would have been at war right now with North Korea if I weren’t President.

Thank you very much.  Thank you.