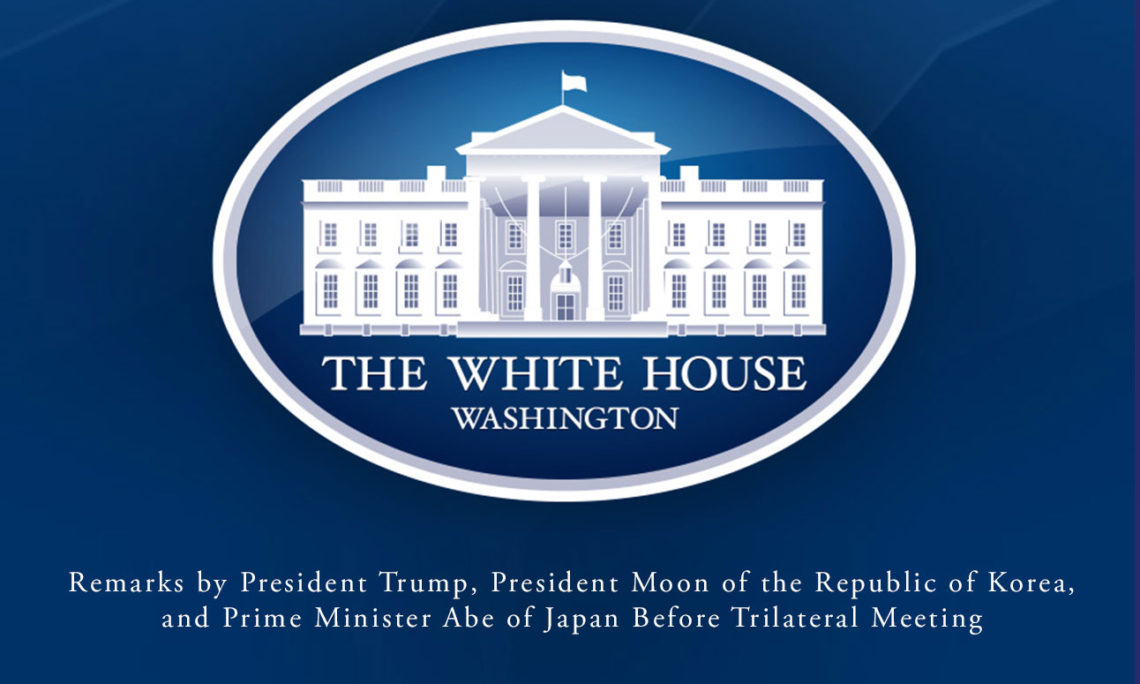 As I outlined at my address to the United Nations General Assembly, North Korea’s nuclear weapons and missile development is a grave threat to peace and security in our world. And it is unacceptable that others financially support this criminal, rogue regime.

The brutal North Korean regime does not respect its own citizens or the sovereignty of other nations. Our new executive order will cut off sources of revenue that fund North Korea’s efforts to develop the deadliest weapons known to humankind.

The order enhances the Treasury Department’s authorities to target any individual or entity that conducts significant trade in goods, services, or technology with North Korea. And I’m very proud to tell you that, as you may have just heard moments ago, China, their central bank has told their other banks — that’s a massive banking system — to immediately stop doing business with North Korea. This just happened. It was just reported.

prevent sanctions evasion, the order also includes measures designed to disrupt critical North Korean shipping and trade networks. For much too long, North Korea has been allowed to abuse the international financial system to facilitate funding for its nuclear weapons and missile programs.

The United States has had representatives working on this problem for over 25 years; they have done nothing. That’s why we’re in the problem that we’re in today, in addition to, frankly, other countries not doing what they should have done.

Tolerance for this disgraceful practice must end now. Our new order will give the Treasury Department the discretion to sanction any foreign bank that knowingly conducts or facilitates significant transactions tied to trade with North Korea. And again, I want to just say, and thank President Xi of China for the very bold move he made today. That was a somewhat unexpected move and we appreciate it.

New authority in this area applies to any activity that occurs following my signature on the executive order — which I have actually just signed. Foreign banks will face a clear choice: Do business with the United States or facilitate trade with the lawless regime in North Korea — and they won’t have so much trade.

This new order provides us with powerful new tools, but I want to be clear the order targets only one country — and that country is North Korea. The regime can no longer count on others to facilitate its trade and banking activities.

Many countries are working with us to increase economic and diplomatic pressure on North Korea. But I continue to call on all those responsible nations to enforce and implement U.N. sanctions and impose their own measures like the ones I am announcing today.

I must tell you that this is a complete denuclearization of North Korea that we seek. Cannot have this as a world body any longer. In just a few minutes, Prime Minister Abe, President Moon and I are going to discuss what more we can do working together. We’re had a very, very close relationship. I think our nations have become closer because of this.

I know it’s going to be a great meeting. Our alliance with South Korea and Japan has never been stronger than it is today. We share a commitment to creating a world where strong and independent nations honor their people, respect their sovereignty, respect the sovereignty also of other nations, and promote peace.

Thank you very much. And I’d like to ask, to start off, President Moon to say a few words, please.

The three leaders have met at the G20 Summit meeting in July in Germany, and we issued a joint statement. And through this joint statement, we also set a firm foundation for close coordination amongst the three countries based on which we are cooperating closely with the international community to impose the sanctions and the pressure on North Korea.

And that through the U.N. General Assembly, the three leaders have come together. We all have made speeches at the General Assembly, and also we met with leaders of the major countries at the bilateral, and we were able to enhance understanding about that the sanctions, and we were also able to urge to the international community about this situation. And I think this is a meaningful outcome that the three countries have made.

President Trump just talked about the executive order, through which the U.S. is going to be implementing sanctions against the DPRK. That was a very major announcement made by China to take actions on the DPRK. I am very confident that such moves will contribute to complete denuclearization of DPRK. In this, I’d like to extend my appreciation to President Trump, and I’d like to say that Korea will closely coordinate with the United States on this matter.

Through today’s meeting, I sincerely hope that there will be a display of strong trilateral leadership in coordinating our responses for the North Korean issue. And I also look forward to engaging in in-depth discussions for the solution to North Korean nuclear and missile problem.

Thanks to Donald’s leadership, we now have this summit meeting Japan, the U.S., and Korea. So our unity and solidarity — the strength thereof that could be presented to North Korea — this meeting is indeed quite significant. I’d like to thank Donald’s leadership.

Recently, U.N. sanctions was adopted unanimously, including a very strict sanctions. And I’d like to thank the efforts of the U.N. ambassadors from the United States. And further efforts are needed. And in this context, Donald just referred to signing of the executive order — new executive order.

So we are going into the new stage of pressure from the viewpoint of exercising the stronger pressure, new pressures. I welcome the new sanction measures of the United States, and I’d like to offer my heartfelt support for that.

Bearing in mind those measures between the three countries, we will have the collaboration so that we will move toward the abandoning of nuclear weapons and nuclear program by North Korea, and we’d like to lead into the next action.

PRESIDENT TRUMP : Thank you very much, everybody. We’re also going to be discussing trade transactions and trade deals with Japan and with South Korea, and that will be very important. But this is something that obviously will take precedence.

So thank you all very much for being here. We appreciate it. We’ll see you later. Thank you.

PRESIDENT TRUMP : Why not?