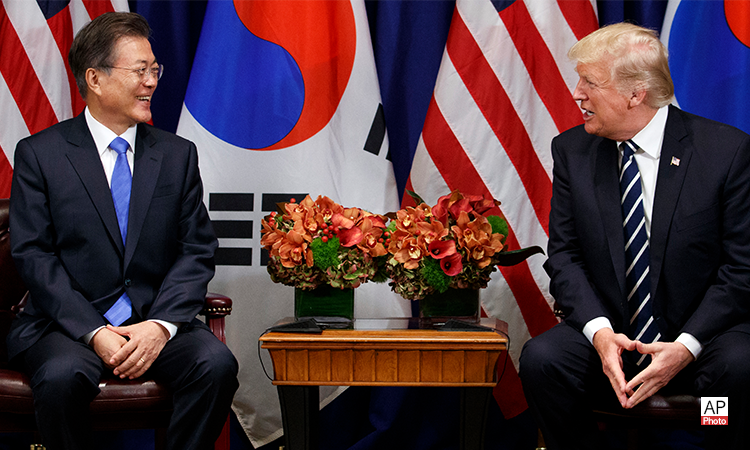 PRESIDENT TRUMP : Thank you very much. It’s a great privilege to be with President Moon of South Korea. As you probably know, we’ve had a few discussions over the last number of months, and I actually think we’re making a lot of headway in a lot of different ways.

We are on a very friendly basis working on trade and working on trade agreements, and we’ll see how that all comes out. But much more importantly, frankly, than trade is the other aspect of our relationship that we’re working with — and that has to do with North Korea.

So we are meeting on a constant basis. We’ll be meeting in a little while, also, with Prime Minister Abe of Japan, and that will be a tri-meeting. So we will see. But I think we’re making a lot of progress in a lot of different ways. Stay tuned. Stay tuned.

PRESIDENT MOON : (As interpreted.) Mr. President, I have met you several times, and I’ve also had many telephone conversations with you. And because of this, I am becoming more and more familiar with you.

Mr. President, in the U.N. General Assembly, you made a very strong speech, and I believe that the strength of your speech will also help to change North Korea.

PRESIDENT TRUMP : Well, thank you very much. And I’m very happy that you used to the word “deplorable.” I was very interested in that word. (Laughter.) I didn’t tell them — I promise I did not tell them to use that word. That’s been a very lucky word for me and many millions of people. (Laughter.)

So because of the fact that our trade deal is so bad for the United States and so good for South Korea, I said we’ll focus on the military. But actually, we’re going to try and straighten out the trade deal and make it fair for everybody.

But our real focus will be on the military and our relationship with South Korea, which is excellent — which is really excellent.

So we’re going to start that process right now. Thank you very much. Thank you, everybody.