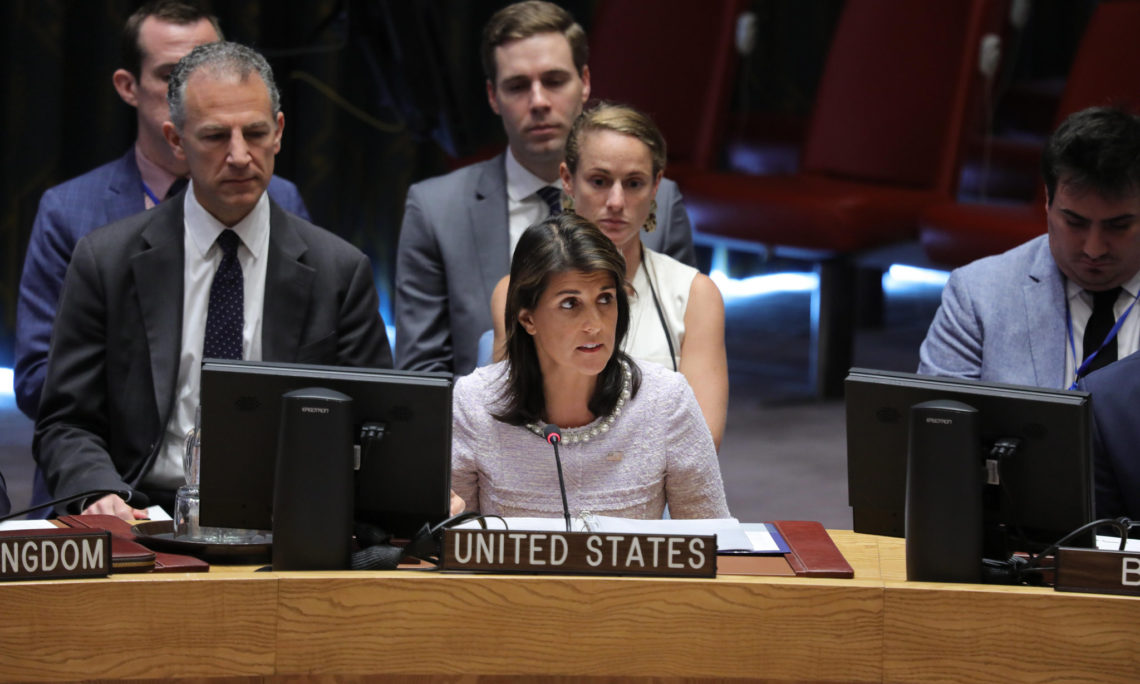 Whether international sanctions succeed or fail depends on the difference between words and deeds. Sanctions are just words on a page unless they are effectively enforced. Russia originally called for this meeting to discuss the implementation of sanctions against North Korea. Then they evidently changed their mind. But we thought the issue was important enough to bring forward and have a briefing. The United States welcomes the chance to examine the difference between words and deeds. We welcome the opportunity to see whether Security Council’s efforts to eliminate North Korea’s nuclear and ballistic missile programs are being honored and enforced and, if not, why.

Together, we have also implemented sanctions against dozens of specific North Korean individuals and entities supporting the regime’s nuclear and ballistic missile programs. All of us pledged a ban on North Korean exports and 30 percent of its imports. All of us promised to uphold the expulsion of all North Korean overseas laborers and stop all joint ventures. We supported a cap on North Korea’s imports of oil and other refined petroleum products at 500,000 barrels a year and a total ban on the export of North Korean coal. We all promised to expel North Korean overseas financial representatives. We agreed North Korea should not be able to obtain chemical and biological weapons-related materials. And we all agreed to stop international scientific engagements with North Korea.

These sanctions were put in place for a very specific reason: to cut off funding and materials for North Korea’s nuclear and ballistic missile programs. Because we know that the cash revenue going to North Korea is used to build its weapons programs, not to help the North Korean people.

The difficult, very sensitive talks with North Korea are ongoing. The Trump-Kim summit has set us on a path toward complete denuclearization. But we’re not there yet. And until we get there, we must not ease the powerful worldwide sanctions that are in place.

It is important to note that, like the rest of the Security Council, Russia voted in favor of all of the sanctions I just described. Despite this, and despite not having yet come close to the achievement of denuclearization, Russia is now asking to ease the sanctions. Russia originally requested this meeting for the purpose of criticizing the United States for blocking rail projects it wants to pursue with North Korea. Russia planned on asking the Security Council to begin to remove sanctions on North Korea so it could pursue a project for its own economic benefit. The question one should ask is why? Why, after voting for sanctions eleven different times, is Russia now backing away from them? We know the answer. It is because Russia has been cheating. And now they’ve been caught.

Despite its repeated support for UN sanctions, Russia is actively working to undermine the enforcement of the Security Council’s sanctions on North Korea. Its violations are not one-offs. They are systematic. Russia has not simply looked the other way as its nationals and entities engage in activities explicitly prohibited by UN sanctions. Russia has engaged in a concerted campaign in the Security Council to cover up violations of sanctions, whether they’re committed by Russia or citizens of other states.

The United States has evidence of consistent and wide-ranging Russian violations. This should offend every current and former member of the Security Council who knows how difficult it was to gain passage of these sanctions. And it should offend every country that has felt the looming threat of North Korean nuclear weapons.

One of the main ways North Korea cheats is through ship-to-ship transfers of banned items, mainly oil, but increasingly coal and other goods. To evade port inspections, oil tankers come together over the high seas. North Koreans use hoses to transfer refined petroleum products to their ships to bring back home. Many tankers are willing to provide oil to make a quick buck.

One Russian vessel, called the Patriot, was captured on film transferring refined petroleum to a North Korean-controlled vessel in April of this year that is UN-listed. The Patriot helped the North Koreans evade sanctions by allowing them to obtain oil on the high seas without having to dock into a port since the North Korean boat was subject to a global port entry ban.

With our allies and partners, the United States has evidence of many more ships we have uncovered providing oil illegally through ship-to-ship transfers.

Just this year, the United States tracked at least 148 instances of oil tankers delivering refined petroleum products obtained through illegal ship-to-ship transfers. We estimate that at the least, North Korea has obtained over 800,000 barrels of refined petroleum products in the first eight months of this year. That’s 160 percent of the 2018 annual cap of 500,000. In reality, we think they have obtained four times the annual quota in the first 8 months of this year.

We presented evidence of these violations to the 1718 Committee that tracks sanctions implementation. But Russia prevented the Committee from declaring that North Korea exceeded its oil quota.

Today, North Korea continues to illegally procure refined petroleum products with the help of Russia. Not only that, when we pursued UN designation of the Patriot and other North Korean, Russian, and other country-flagged ships that have been found to be illegally transferring oil, Russia consistently blocked these designations in the sanctions committee.

And it’s not just on the high seas that Russia is aiding sanctions evasion. When North Korea assassinated Kim Jong Nam with VX, a deadly nerve agent, the United States moved to strengthen UN controls on the flow of chemical and biological weapons technology of North Korea. Russia agreed with us in the Security Council but turned around and again blocked the sanctions committee from updating its 12 year-old sanctions list – a list that is critical to preventing the flow of dangerous weapons of mass destruction-related materials to North Korea.

The list goes on. Russia agreed with the rest of the Security Council one year ago to sanction a North Korean operative in Moscow who was raising money for weapons programs. But it never expelled this operative, and when it came time to act, Russia not only fought to allow the operative to remain in its country, but it’s fighting for him to retain access to his Moscow bank account. For what? To finance his illegal operations in Russia in violation of the UN sanctions.

Step by step, sanction by sanction, and time and time again, Russia is working across the board to undermine the sanctions regime.

Last month the independent Panel of Experts on the implementation of North Korea sanctions submitted its bi-annual report to the sanctions committee. The report contained evidence of multiple Russian sanctions violations. We have seen and read this report. But when the Panel submitted the report to the Security Council last week, we noticed something deeply troubling. The evidence of Russian violations that was detailed in the earlier report was missing.

It had been removed from the open section of the report. Apparently, Russia threatened to prevent release of the report unless its demands to hide the evidence of its violations was met. To our deep regret, the Panel agreed. This Russian interference was so egregious that the United States had no choice but to prevent the publication of the tainted report.

The UN Panel of Experts reporting process is our most valuable tool in ensuring that sanctions are implemented fully and effectively. It gives the Security Council and the world an impartial, independent means of ensuring accountability for violators – and a warning to anyone who is considering violating sanctions in the future.

We’ve seen this Russian tendency to kill the messengers of inconvenient truths before. They didn’t like it when the Joint Investigative Mechanism concluded that their client, the Assad regime, used chemical weapons against its own people in Syria. So they just killed the mechanism.

Now Russia has succeeded in discrediting the UN independent panel reporting process because it called out their violations.

Russian corruption is like a virus. It is impeding our ability to achieve complete denuclearization in North Korea. Now it has spread to the sanctions reporting process. If we’re not careful, the sickness will make its way to the integrity and effectiveness of the Security Council itself.

Finally, let’s look at why Russia is so focused on developing railways with North Korea – so focused that it will tell us today we should remove sanctions. Russia’s Far East region has few economic opportunities, but coal is one of them. Exporting coal hasn’t been easy without a warm water seaport. So Russia has been leasing the North Korean port of Rajin. It poured a lot of money into building this port. We knew it was important for Russia so we exempted it five times since 2016. But that’s not enough for Russia. It wants sanctions relief so it can connect its Trans-Siberian railway into North Korea to ultimately reach a global port in South Korea. The problem is, it isn’t time yet to relieve the pressure on North Korea no matter how lucrative it is for Russia. As we have all agreed to, that time comes with denuclearization, not before.

Every time the Security Council overlooks sanctions violation – every time we allow the Russians to bury evidence of violations – we remove incentives of Pyongyang to end its nuclear program.

The evidence we’ve presented today leaves Russia with a choice. It’s binary. Either it wants sanctions to succeed or it doesn’t. Either it wants to deprive the Pyongyang government of the means to finance its illegal nuclear weapons system or it doesn’t. Unfortunately, I think we know the answers to these questions. Either way, the Security Council can no longer be indifferent to Russia’s actions.

The United States calls on all members of the Security Council to join us in demanding that the Panel of Experts submit its original report to the Security Council. Every member of this Council should go on the record on this request. Nothing less than the integrity of the United Nations and our unified approach to North Korea hang in the balance.