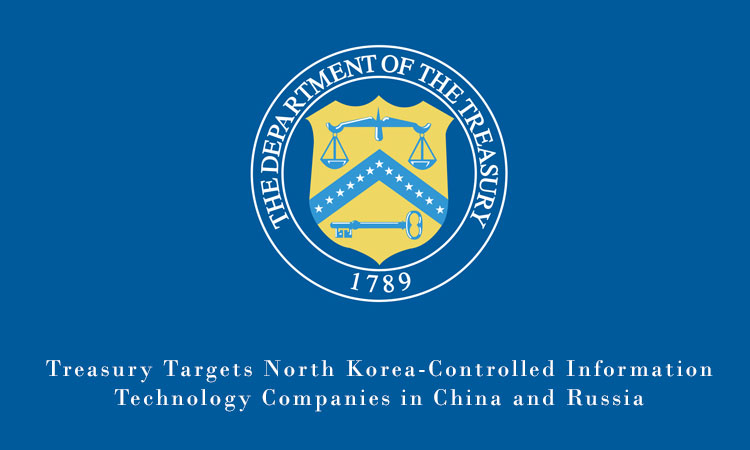 “These actions are intended to stop the flow of illicit revenue to North Korea from overseas information technology workers disguising their true identities and hiding behind front companies, aliases, and third-party nationals. Treasury is once again warning the IT industry, businesses, and individuals across the globe to take precautions to ensure that they are not unwittingly employing North Korean workers for technology projects by doing business with companies like the ones designated today,” said Treasury Secretary Steven Mnuchin. “The United States will continue to fully enforce and implement sanctions until we have achieved the final, fully verified denuclearization of North Korea.”

China Silver Star and Volasys Silver Star were each designated under two authorities: for having engaged in, facilitated, or been responsible for the exportation of workers from North Korea, including exportation to generate revenue for the Government of North Korea or the Workers’ Party of Korea (E.O. 13722); and for operating in the IT industry in North Korea (E.O. 13810). Jong Song Hwa was designated for having acted or purported to act for or on behalf of, directly or indirectly, China Silver Star.

The United Nations Security Council acknowledged in Resolution 2397 of 2017 that the revenue generated from North Korean workers overseas contributes to North Korea’s nuclear weapons and ballistic missile programs. Indeed, China Silver Star is associated with the UN- and U.S.-designated Munitions Industry Department (MID) of the Workers’ Part of Korea and the UN- and U.S.-designated Korea Kuryonggang Trading Corporation (Kuryonggang). The MID is responsible for overseeing North Korea’s ballistic missile programs, and Kuryonggang is primarily responsible for the procurement of commodities and technologies to support North Korea’s defense research and development programs and procurement.

Furthermore, as noted in the recent Supply Chain Advisory issued by the U.S. Department of State, with the U.S. Department of the Treasury and the U.S. Department of Homeland Security, the IT industry, among other industries, has heightened risk of involving North Korean labor. North Korea sells a range of IT services and products abroad, including website and app development, security software, and biometric identification software that have military and law enforcement applications. North Korean firms disguise themselves through a variety of tactics including the use of front companies, aliases, and third-country nationals who act as facilitators. Businesses should be aware of deceptive practices employed by North Korea in order to implement effective due diligence policies, procedures, and internal controls to ensure compliance with applicable legal requirements across their entire supply chains.

Identifying information on the individual and entities designated today.