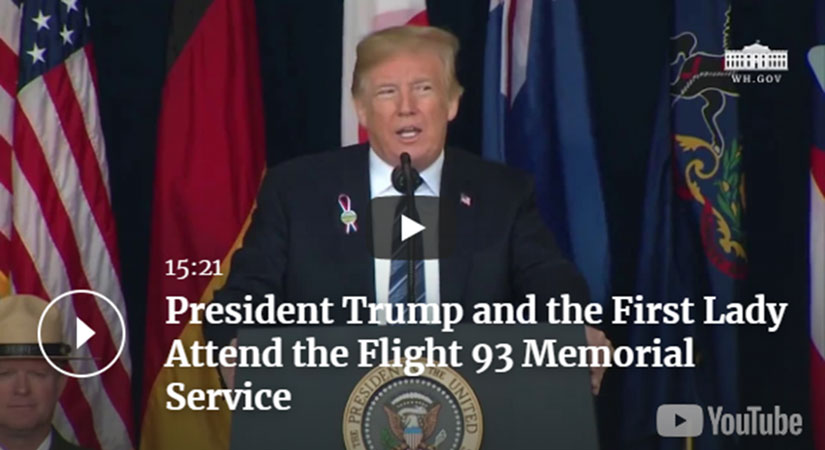 Seventeen years ago, America and the world were forever changed. More than a decade and a half before election as President, Mr. Trump was in New York City on the day when an unprecedented act of terror unfolded across our country.

That same resilience played out in two other communities that endured attacks that day: Shanksville, Pennsylvania—where United Flight 93 went down after the heroic actions of its passengers and crew—and Arlington, Virginia, home of the Pentagon.

“We’re gathered together on these hallowed grounds to honor the memory of nearly 3,000 souls who were murdered on this day 17 years ago,” President Trump said at the Flight 93 National Memorial in Pennsylvania. “We’re here to pay solemn tribute to the 40 passengers and crewmembers on Flight 93 who rose up, defied the enemy, took control of their destiny, and changed the course of history.”

Since September 11, 2001, nearly 5.5 million Americans have enlisted in the U.S. Armed Forces. “Today, we also think of the more than 200,000 service members now serving overseas,” the President said. “We think of every citizen who protects our Nation at home, including our state, local, and federal law enforcement.”

Speaking at the Pentagon, Vice President Pence echoed those thoughts, reminding Americans of another important reason to come together today. “While many of us remember that day like it was yesterday, a growing number of Americans have no living memory of what happened here. Roughly one-quarter of our people were born after September the 11th, 2001,” he said.

“We also gather here to ensure that each succeeding generation knows the story of what happened that dark day and understands why we must learn the lessons of 9/11.”

In his official Patriot Day Proclamation for September 11, 2018, President Trump highlighted a few of those important lessons.

“We come together, today, to recall this timeless truth,” the President writes. “When America is united, no force on Earth can break us apart. Our values endure; our people thrive; our Nation prevails; and the memory of our loved ones never fades.”