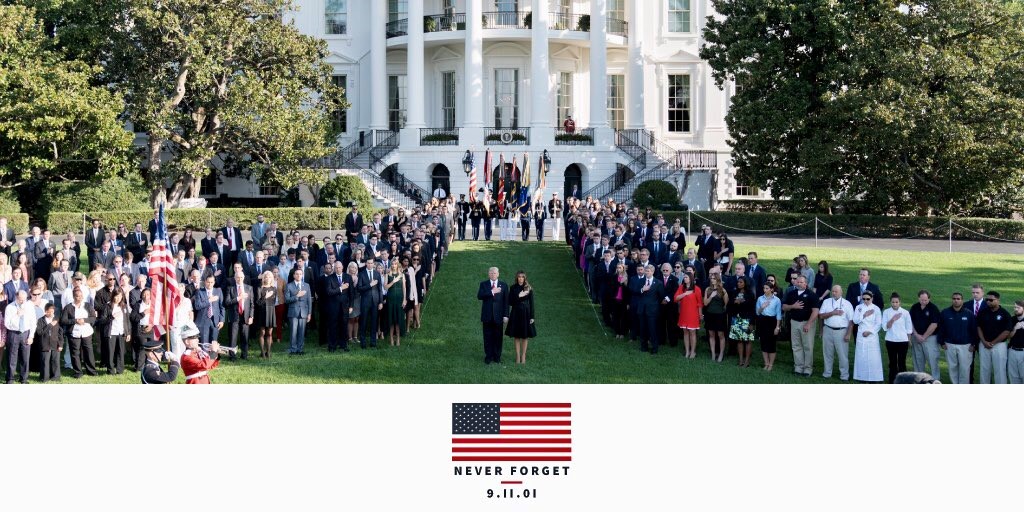 We’re gathered together on these hallowed grounds to honor the memory of nearly 3,000 souls who were murdered on this day 17 years ago.  We’re here to pay solemn tribute to the 40 passengers and crewmembers on Flight 93 who rose up, defied the enemy, took control of their destiny, and changed the course of history.

Today, we mourn their loss.  We share their story.  And we commemorate their incredible valor.

On September 11th, 2001, a band of brave patriots turned the tide on our nation’s enemies, and joined the immortal ranks of American heroes.

At this memorial, on this sacred earth, in the field beyond this wall, and in the skies above our heads, we remember the moment when America fought back.

Melania and I are grateful to be joined for today’s ceremony by Governor Tom Wolf and Governor Mark Schweiker.  I also want to thank the members of Congress in attendance: Senator Bob Casey, Congressmen Lou Barletta, Keith Rothfus, Bill Shuster, and along with the president of the Families of Flight 93, Gordon Felt.

We’re also joined by members of the National Park Service, along with firefighters, first responders, and incredible people from law enforcement.  These are truly great people.  (Applause.)  Some of you here today answered the call and raced to this field 17 years ago.  You fill our hearts with pride, and I want to thank you on behalf of our country.  Thank you very much.  (Applause.)

Most importantly, to the family members of Flight 93:  Today, all of America wraps up and joins together.  We close our arms to help you shoulder your pain and to carry your great, great sorrow.  Your tears are not shed alone, for they are shared grief with an entire nation.  We grieve together for every mother and father, sister and brother, son and daughter, who was stolen from us at the Twin Towers, the Pentagon, and here in this Pennsylvania field.  We honor their sacrifice by pledging to never flinch in the face of evil, and to do whatever it takes to keep America safe.  (Applause.)

Seventeen years ago, your loved ones were among The Forty of Flight 93 — the 40 passengers and crewmembers onboard the 8:00 a.m. United Airlines flight from Newark to San Francisco.  They were men and women from every background.  They were young people returning from visiting family, moms and dads on business trips, and friends going and coming from birthdays and weddings.

They boarded the plane as strangers — and they entered eternity linked forever as true heroes.  (Applause.)

Soon after takeoff, Flight 93 was hijacked by evil men bent on terror and conquest.  Passengers and crewmembers began using their phones to call home.  They learned that two planes had already crashed into the World Trade Center in New York City.

Immediately, those onboard Flight 93 started planning a response.  Sandy Bradshaw, a flight attendant, called her husband and told him they were in the back of the plane preparing hot water to throw onto the hijackers.  Passenger Jeremy Glick explained the plan to his wife and said, “Stay on the line.  I’ll be back.”

The passengers and crew members came together, took a vote, and they decided to act.  At that moment, they took their fate — and America’s fate –- back into their own hands.

In the last 20 minutes, many placed their final calls home, whispering those eternal words: “I love you.”  Some said the Lord’s Prayer.  And then they bravely charged the cockpit.  They attacked the enemy.  They fought until the very end.  And they stopped the forces of terror and defeated this wicked, horrible, evil plan.

Flight 93 crashed yards from where we stand, just 20 minutes flying time from the United States Capitol.

Through their sacrifice, The Forty saved the lives of countless Americans, and they saved our capital from a devastating strike.

In the days after the attack, tens of thousands of fire fighters, police officers, and recovery workers traveled to New York and Arlington to crawl through the rubble in search for survivors.

There were prayer vigils, memorials, and charity drives all across our nation.

Here in Shanksville, many of you raised up the first memorial –- a wooden cross, a chain-linked fence, mementos and tributes pouring in, and dozens and dozens of American flags.

A piece of America’s heart is buried on these grounds but in its place has grown a new resolve to live our lives with the same grace and courage as the heroes of Flight 93.

This field is now a monument to American defiance.  This memorial is now a message to the world: America will never, ever submit to tyranny.  (Applause.)

Today, we also think of the more than 200,000 service members now serving overseas.  And we think of every citizen who protects our nation at home, including our state, local, and federal law enforcement.  These are great Americans.  These are great heroes.  We honor and thank them all.  (Applause.)

As Commander-in-Chief, I will always do everything in my power to prevent terrorists from striking American soil.

Here with us today is Dorothy Garcia Bachler.  Her husband Sonny was one of the passengers on Flight 93.  On September 11th, 2001 — just over a month after their 32nd wedding anniversary — Sonny was on his way back from a business meeting.  He called Dorothy — who he loved so much — called her on the plane and uttered her name before the line went dead silent.

In the days after the attack, Dorothy told the investigators there was only one thing she wanted from this field: her husband’s wedding ring.  They would know it by the inscription etched inside.  “All my love,” it said, followed by the number “8/2/69” –- the date of their anniversary.  The officers — great people — promised to try.  But in this field of wreckage, it seemed certainly impossible.

Dorothy began to pray, and she asked her friends to do the same.  Days went by, then months.  Still no ring.  A week before Christmas, on December 19th, she heard a knock at the door.  Two officers were standing with a — really beautiful to her — she saw it was so beautiful; she knew what was happening — a beautiful, small white box.  Inside it was a wallet, a luggage tag, a driver’s license, a small bag with the wedding ring inscribed with those three precious words: “All my love.”

Those words echo across this field.  And those words tell the story of 40 men and women who gave all their love for their families, their country, and our freedom.

To Dorothy, and to every family here today, America will never forget what your loved ones did for all of us.  (Applause.)

Earlier this week, you dedicated the final part of this memorial: the Tower of Voices.  Standing at 93 feet tall, the Tower of Voices is now the first structure visitors see when they come to this now sacred ground.  It will hold 40 beautiful chimes that ring throughout these fields — each a unique note, but all in perfect harmony.

As long as this monument stands, as long as this memorial endures, brave patriots will rise up in America’s hours of need, and they too will fight back.  (Applause.)

Seventeen years ago, forty incredible men and women showed the whole world that no force on Earth will ever conquer the American spirit.  We treasure their memory.  We cherish their legacy.  And we ask God to forever bless the immortal heroes of Flight 93.