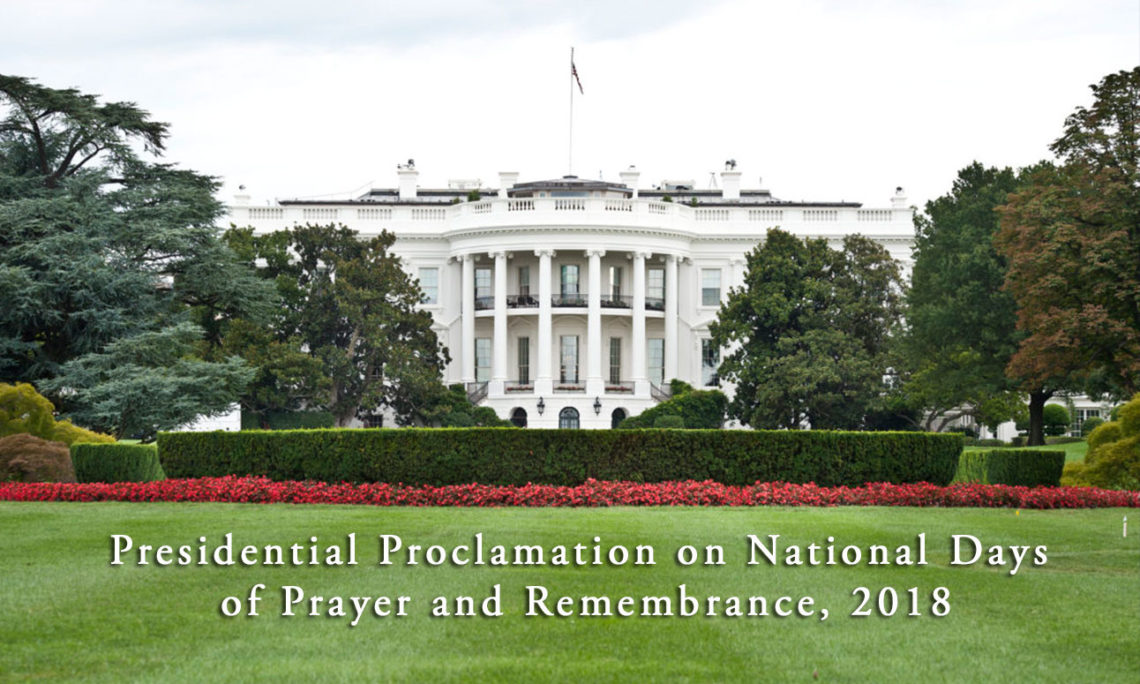 During the National Days of Prayer and Remembrance, we pause to honor the memory of the nearly 3,000 innocent people who were murdered by radical Islamist terrorists in the brutal attacks of September 11, 2001.  We come together to pray for those whose lives were forever changed by the loss of a loved one.  We strengthen our resolve to stand together as one Nation.

Darkness, hatred, and death marred that fateful September morning, 17 years ago.  Our Nation watched with stunned silence, tears, anger, and utter disbelief as multiple tragedies unfolded.  Although shaken and heartbroken, we were not defeated.  Even in the midst of the devastation and sorrow, the indomitable spirit of our country emerged, as first responders selflessly rushed into the heart of danger.  The evil attacks, intended to warp our way of life, instead ignited a flame of national unity, strengthened our will, and mobilized our volunteer spirit.  The faith of our Nation may have been tested in the avenues of New York City, on the shores of the Potomac, and in a field near Shanksville, Pennsylvania, but our strength never faltered and our resilience never wavered.

The passage of time cannot ever lessen our commitment to freedom, our heartbreak for those who perished, our compassion for those who lost a friend or loved one, and our gratitude for the first responders and other heroes who braved death to save so many.  We must recommit ourselves to ensuring that future generations of Americans always understand this defining moment in our Nation’s history.  During these annual days of prayer and remembrance, we pray that all find peace in the love of God, courage to face the future, and comfort in the knowledge that those who were lost will never be forgotten.  We pray for guidance, wisdom, and protection for the men and women in uniform who fight each day to protect America from terrorism, and we pray for the unity of our Nation, both in times of peril and peace.

IN WITNESS WHEREOF, I have hereunto set my hand this seventh day of September, in the year of our Lord two thousand eighteen, and of the Independence of the United States of America the two hundred and forty-third.