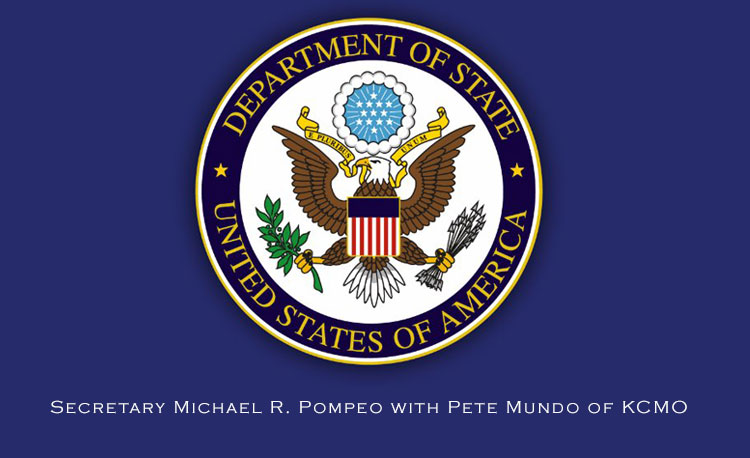 QUESTION: Well, it’s great to have you back in the state. And I know you obviously have a lot on your plate around the world right now. It’s – there’s never a slow time for you, even though it might be slow for Congress right now. When you look at what is happening right now, Mr. Secretary, with North Korea and some of the missile tests that they are undergoing, it seems like there have been corners of the administration that don’t seem overly concerned about it at this point in time. How concerned are you about what is going on there with Kim Jong-un?

SECRETARY POMPEO: Remember the President’s mission set. We came in when the North Koreans were engaged in behaviors that we needed to fix, and we set about building out a coalition. We were successful at doing that. We got the whole world to join in the toughest sanctions in history. And then President Trump agreed to meet with Chairman Kim. He’s now done so three times. It’s been important, because Chairman Kim has made commitments. He’s made commitments to denuclearize. We’ve made commitments to create a brighter future for the North Korean people.

I’m very committed to working with the North Korean team to negotiate a set of outcomes that will be good for both the United States and the world in terms of reducing the nuclear threat that emanates from the Korean Peninsula, but also ensuring that security and peace and prosperity can come to North Korea as well. We always knew it would take time. We always knew there would be bumps in the road. But it is truly the case that we hope Chairman Kim and his team will deliver on the promises they made back in Singapore in the summer of last year.

QUESTION: Have you waivered? Or how committed do you think they are to those negotiations with you, based on some of those actions they’ve taken lately?

SECRETARY POMPEO: We think they’re still committed. We think they’re still – intend to head down the diplomatic path, and we’re doing everything we can to encourage that, because we think it’s the right outcome for the world. The world doesn’t need conflict. We don’t need nuclear risk. Those nuclear weapon systems that North Korea has been driving towards for decades now don’t provide the security that the North Koreans believe they do. In fact, what will provide them security is coming to a set of understandings with the United States and with the world to denuclearize. And when they do so, we’ll provide the security assurances that are needed for them and for their people. Every nation has the sovereign right to defend itself. Then we can create economic opportunity and better lives for the people of North Korea as well. It’s our mission set. We’re incredibly focused on it.  [Full Text]