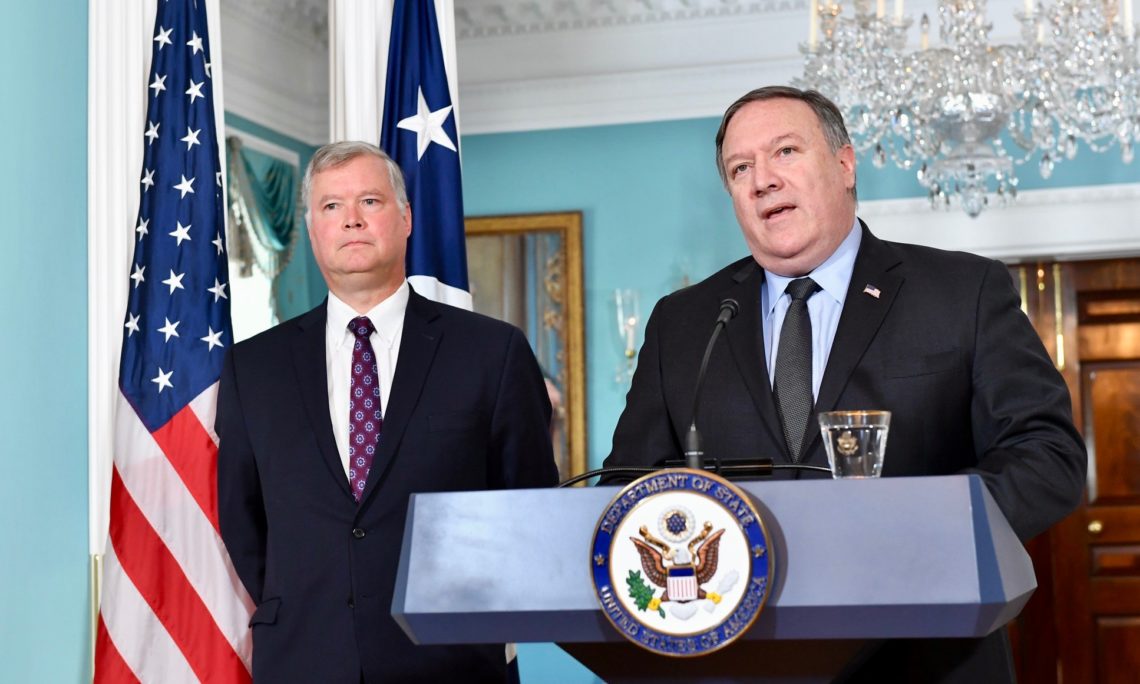 SECRETARY POMPEO: Good morning, everyone. I’m excited to announce this morning that Steve Biegun is joining our team as the special representative for North Korea.

Steve will direct U.S. policy towards North Korea and lead our efforts to achieve President Trump’s goal of the final, fully verified denuclearization of North Korea, as agreed to by Chairman Kim Jong-un.

It’s a very timely moment for Steve to join the team and come on board. He and I will be traveling to North Korea next week to make further diplomatic progress towards our objective.

Steve is taking the reins of a great team effort. The State Department has already done excellent work in implementing and sustaining the pressure campaign, putting together the first-ever leader-level summit in Singapore, and laying the groundwork to hold North Korea accountable to the promises that Chairman Kim has made. As the special representative, Steve will lead negotiations and spearhead diplomatic efforts with our allies and partners.

Steve has had extensive career in foreign policy and in tough negotiating settings as well. He comes to us from his position as the vice president of international government affairs for the Ford Motor Company. In this job, he closely engaged foreign governments to advance Ford’s goals all around the world. He will now employ the same skill and dedication on behalf of the American people to make sure that their interests are well served in respect to North Korea.

Steve also spent nearly two decades doing foreign policy work on Capitol Hill and in the executive branch. His positions have included national security advisor to former Senate Majority Leader Senator Bill Frist. He was the executive secretary at the National Security Council under President George W. Bush and the chief of staff at the Senate Foreign Relations Committee.

Using diplomacy to resolve the North Korean security threat once and for all remains one of President Trump’s greatest priorities, and Steve is eminently qualified for the task and clear-eyed in the challenge before us. I’m fully confident that he will be able to lead our mission in ensuring a secure future for the American people and – we hope – a far brighter future for the people of North Korea.

And now I’d like to invite our new special representative for North Korea, Steve Biegun, to say a few words.

MR BIEGUN: Thank you very much, Mr. Secretary. And I want to start by thanking you and the President for having given me an incredible opportunity to once again serve our great nation.

I fully understand the importance of this job – the President, you, and the American people – and what you expect from all of us in achieving a more peaceful world. The issues are tough, and they will be tough to resolve. But the President has created an opening, and its one that we must take by seizing every possible opportunity to realize the vision for a peaceful future for the people of North Korea.

This begins with the final, fully verified denuclearization of North Korea as agreed by Chairman Kim Jong-un at the summit with President Trump in Singapore. I will work closely with my colleagues here at the State Department and throughout the U.S. Government, as well as our allies and partners around the world, to achieve our shared goal of a safer and more peaceful world.

Once again, I’m honored and grateful for this opportunity, and I look forward to faithfully representing the United States of America. Mr. Secretary, I will give you and the American people my very best. Thank you.

QUESTION: You’re not going to take any questions?