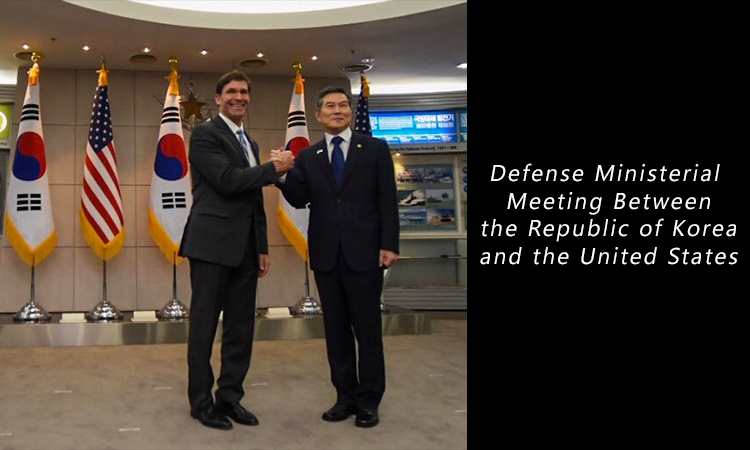 Republic of Korea Minister of National Defense Jeong Kyeong-doo and the U.S. Secretary of Defense Mark T. Esper held a ROK-U.S. Defense Ministerial meeting August 9, 2019, in Seoul where they discussed the security situation on the Korean Peninsula, progress toward the transition of wartime operational control, and other key ROK-U.S. Alliance issues.

Minister Jeong and Secretary Esper shared their understanding through assessments of the recent security environment on the Korean Peninsula and in the region, and reaffirmed their commitment to support the two countries’ diplomatic efforts to achieve complete denuclearization and permanent peace on the Korean Peninsula. They also pledged to strengthen communication and cooperation to maintain stability in the region based on a robust U.S.-ROK Alliance.

Minister Jeong and Secretary Esper noted the significant strides made toward the fulfillment of conditions for the transition of wartime OPCON, and they look forward to discussing the assessment results of initial operational capability certification of the future Combined Forces Command Headquarters at this fall’s Security Consultative Meeting. They agreed that the transition should strengthen the ROK-U.S. Combined Forces Command and the Alliance, and ensured it continues to contribute to the peace and stability of not only the Korean Peninsula, but also of the region and the world.

Minister Jeong and Secretary Esper affirmed the importance of continued close coordination in achieving denuclearization and peace on the Korean Peninsula, and pledged to maintain close communication at the ministerial level.