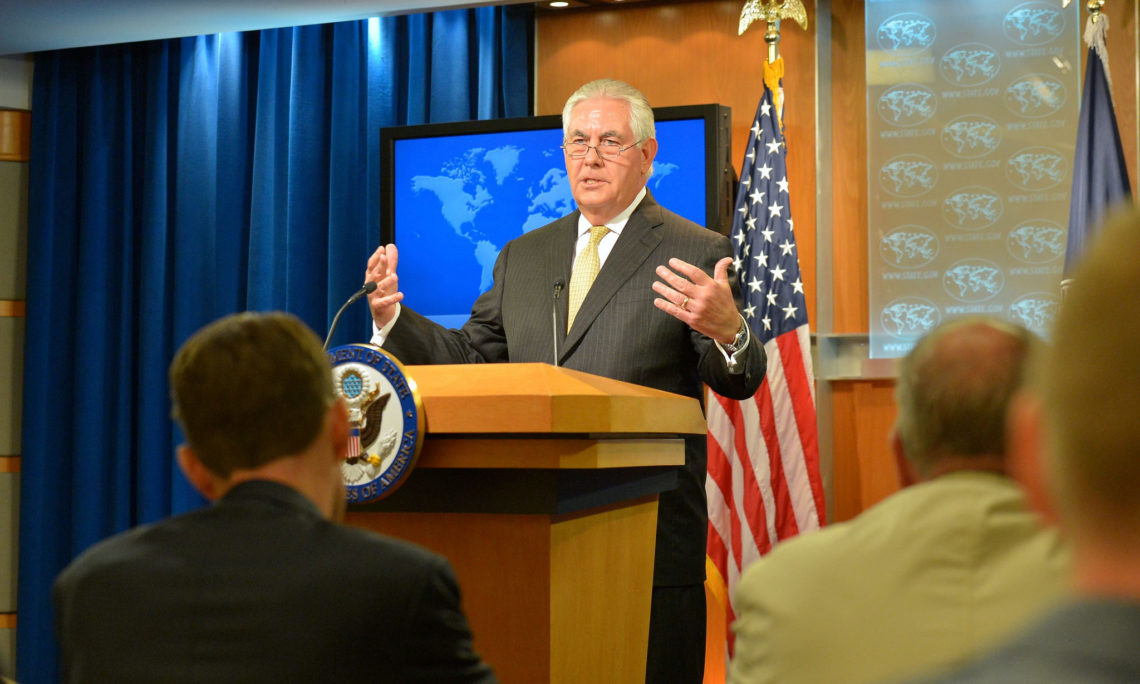 Secretary of State Rex Tillerson at a Press Availability

One of the first threats we were confronted with upon entering office is North Korea, and it was the first policy area that we felt an urgency to deal with. And I think, as many of you have watched over the last several months, that threat has materialized in the ways that we expected it would. And that’s why early on we identified it as a very urgent matter, and the North Koreans have certainly proven the urgency of that to us.

We initiated a sustained and continued intensified campaign on what I like to call peaceful pressure, because the options available to us, I think as all of you well understand, are limited, and particularly if we think we are operating under a short period of time. So we felt the appropriate thing to do first was to seek peaceful pressure on the regime in North Korea to have them develop a willingness to sit and talk with us and others but with an understanding that a condition of those talks is there is no future where North Korea holds nuclear weapons or the ability to deliver those nuclear weapons to anyone in the region much less to the homeland.

In doing so, we’ve sought to partner with China. China does account for 90 percent of economic activity with North Korea. The Chinese have been very clear with us that we share the same objective, a denuclearized Korean Peninsula. They do not see it in their interest for North Korea to have nuclear weapons, just as we do not see it in anyone’s interest. China has ways that they can put pressure on and influence the North Korean regime because of this significant economic relationship that no one else has.

We’ve been very clear with the Chinese we certainly don’t blame the Chinese for the situation in North Korea. Only the North Koreans are to blame for this situation. But we do believe China has a special and unique relationship because of this significant economic activity to influence the North Korean regime in ways that no one else can.

And that’s why we continue to call upon them to use that influence with North Korea to create the conditions where we can have a productive dialogue. We don’t think having a dialogue where the North Koreans come to the table assuming they’re going to maintain their nuclear weapons is productive. So that’s really what the objective that we are about is.

We have reaffirmed our position towards North Korea, that what we are doing, we do not seek a regime change; we do not seek the collapse of the regime; we do not seek an accelerated reunification of the peninsula; we do not seek an excuse to send our military north of the 38th parallel. And we’re trying to convey to the North Koreans we are not your enemy, we are not your threat, but you are presenting an unacceptable threat to us, and we have to respond. And we hope that at some point, they will begin to understand that and that we would like to sit and have a dialogue with them about the future that will give them the security they seek and the future economic prosperity for North Korea, but that will then promote economic prosperity throughout Northeast Asia.

This is going to be a continued effort to put ever greater pressure on the North Korean regime because our other options, obviously, are not particularly attractive.

Now, in saying that, I want to – I want to acknowledge a couple of people, and I’m going to give some credit to people as I go through this. These first six months, we’ve been carrying out this activity, as you know, with largely people in acting assistant secretary positions, using our ambassadors, the strength of the organization, and I’m quite proud of what we’ve accomplished. In dealing with North Korea, Acting Assistant Secretary Susan Thornton and Ambassador Joseph Yun have been stellar in helping us develop these policies and carry them out. Susan Thornton also has been key to our relationship with China, and I think it’s important that everyone understand that North Korea does not define the relationship with China.

Our relationship with China, obviously, is much broader. And if you go back to the summit in Mar-a-Lago between President Trump and President Xi, much of that summit was a discussion about what should the relationship between the U.S. and China be. It has been defined, since the opening of China with the historic Nixon visit, the adoption of the “one China” policy, the three documents and agreements, and that has given us a long period of no conflict between China and the U.S., creating conditions for enormous economic growth and prosperity in China, which the U.S. and the rest of the world has seen benefits from as well. That has defined the last 40 to 50 years of our relationship.

The question now is that we – we believe we’re at a bit of a pivot point in that relationship because of how China has progressed now to become the second largest economy in the world, and they will continue to grow in their importance to the global economy. What should define this relationship for the next 50 years? And those are the discussions that we have with the Chinese in the broadest contours: How should we define this relationship and how do we ensure that economic prosperity to the benefit of both countries and the world can continue, and that where we have differences – because we will have differences, we do have differences – that we will deal with those differences in a way that does not lead to open conflict. And that has been the success of the past policy. It’s one that we must continue, but we recognize conditions have changed and to simply rely upon the past may not serve either one of us well.

So these are very in-depth conversations and discussions we have with the Chinese, and we test this relationship through things like the situation in North Korea. Can we work together to address this global threat where we have a common objective? And where we have differences – in the South China Sea, and we have some trading differences that need to be addressed – can we work through those differences in a way without it leading to open conflict and find the solutions that are necessary to serve us both?