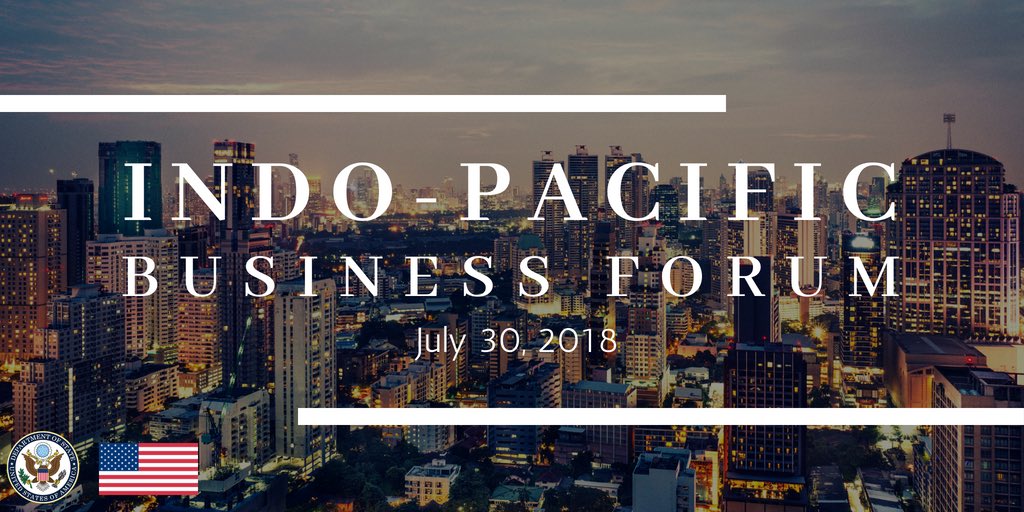 Secretary Michael R. Pompeo today addressed the Indo-Pacific Business Forum in Washington, DC, to launch the economic and commercial pillars of the Trump Administration’s Indo-Pacific strategy. Before top U.S. business leaders and foreign dignitaries at the U.S. Chamber of Commerce, Secretary Pompeo detailed how U.S. business engagement in the Indo-Pacific is essential to the U.S. mission to promote peace and prosperity.

Secretary Pompeo emphasized the critical role of the U.S. private sector in ensuring a sustainable, financially responsible economic future for the Indo-Pacific. He launched new initiatives to accelerate U.S. private investment and support job-creating U.S. export opportunities in the areas of digital economy, infrastructure, and energy. He also reaffirmed the Administration’s support for the Better Utilization of Investments Leading to Development (BUILD) Act, which would more than double the U.S. government’s development-finance capacity, to $60 billion, to support U.S. private investment in strategic opportunities abroad.

From August 1-5, Secretary Pompeo will travel to the Indo-Pacific to discuss America’s economic and strategic vision with regional partners. He will travel first to Malaysia to discuss strengthening the Comprehensive Partnership and advancing common security and economic interests. He will next travel to Singapore to meet with Prime Minister Lee Hsien Loong and Foreign Minister Vivian Balakrishnan, as well as attend the ASEAN Regional Forum, the East Asia Summit Ministerial, the U.S.-ASEAN Ministerial, and the Lower Mekong Initiative Ministerial. Finally, in Indonesia, he will discuss advancing our shared security and bilateral trade and investment goals.

At the Indo-Pacific Business Forum, Secretary Pompeo announced $113.5 million in new U.S. economic initiatives to support foundational areas of the future: digital economy, energy, and infrastructure. This represents a strategic investment in deeper engagement with the Indo-Pacific while growing our own economy and creating jobs at home. Details of all of Secretary Pompeo’s announcements are below.

Secretary Pompeo announced at the Indo-Pacific Business Forum that the Millennium Challenge Corporation will implement a $350 million compact with Mongolia to enhance sustainable water supply to the Mongolian capital of Ulaanbaatar.

Secretary Pompeo also announced strengthened support for important regional institutions in the Indo-Pacific, including the Association of Southeast Asian Nations (ASEAN) and U.S.-ASEAN Connect, Asia-Pacific Economic Cooperation (APEC), and the Lower Mekong Initiative, along with a first-ever contribution to the Indian Ocean Rim Association.

The Department of State has published a calendar listing upcoming U.S. diplomatic and commercial engagements focused on the Indo-Pacific, including new conferences, trade missions, and other events in the United States and overseas.