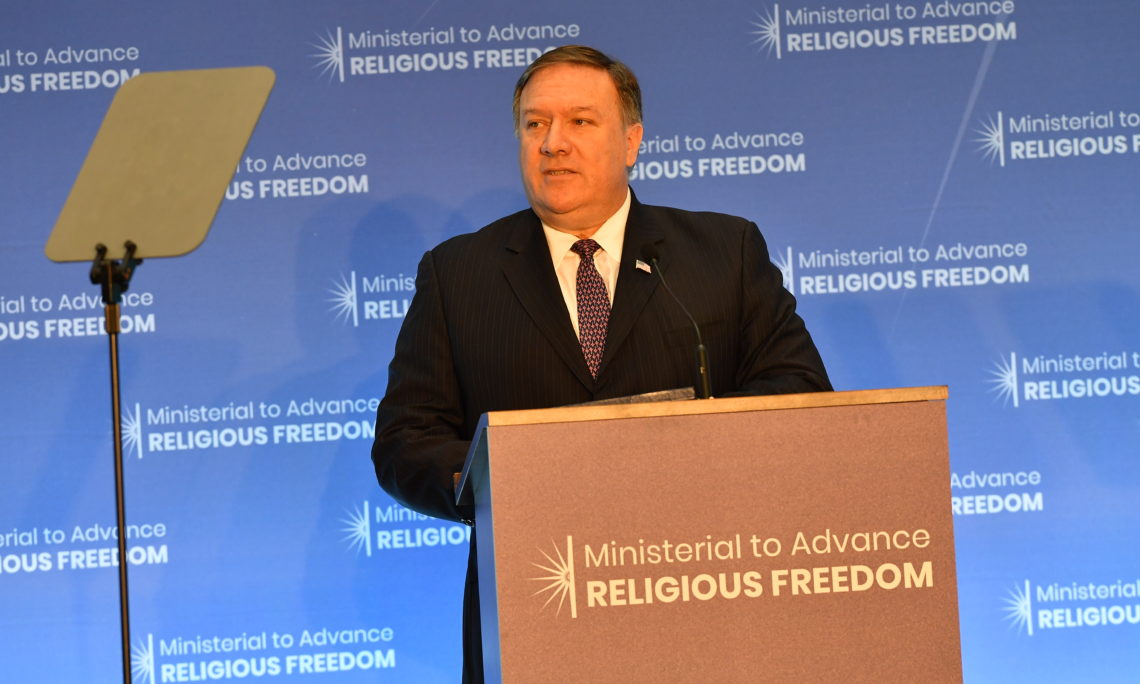 SECRETARY POMPEO:  Good afternoon, everyone.  Since the earliest days of his presidency, President Trump has directed his administration to advance and defend the rights of religious freedom at home and abroad, because religious freedom is a universal God-given right to which all people are entitled.  It is also an essential building block for all free societies.

Ensuring religious freedom around the world is a key priority of the Trump administration’s foreign policy.  To that end, today we concluded the first ever Ministerial to Advance Religious Freedom.  The success of this event was truly unbelievable.  The level of enthusiasm from partner groups and other governments was so high that I’ve already committed to doing this again, to holding the second ministerial a year from now.

This week, we were joined by more than 80 foreign delegations and religious leaders from all across the world who work closely with civil society groups, who are often on the frontlines of reporting and responding to cases of religious intolerance and persecution.  I want to thank the dozens of ministerial-level foreign dignitaries that attended.  I interact professionally with them every day in the course of diplomacy, but as a man of faith their presence this week was significant to me personally as well.

Two, we had survivors of religious persecution with us sharing their stories and driving home why this work is so important.  The Vice President and I had a chance to sit with a number of them and hear their stories, to talk about why they were working in this field, why religious freedom meant so much to them.

And also today, Vice President Pence gave a speech to bring attention to the plight of religious minorities of all faiths who are persecuted for what they believe, often by their own governments.

The Vice President also announced that in the coming months the United States Government will launch a Genocide Recovery and Persecution Response initiative.  This is a diplomatic and assistance effort specifically focused on ensuring communities of faith and local organizations are part of the solution in recovering from atrocities.  While focused first on our ongoing response to the genocide committed by ISIS in Iraq, our hope is that this program will assist victims in many different places.

We at the State Department are also undertaking several new initiatives to further the cause of religious freedom around the world.  First, as the Vice President announced this morning, we’ve created an International Religious Freedom Fund.  This is a joint fund with other nations that will support the work of religious freedom defenders and assist victims of religious persecution.

Second, we have created a new International Visitor Leadership Program to bring those working on the frontlines of religious freedom issues together, all different faiths from all around the world, to come to the United States.  It’s a ten-day project and will focus on promoting religious pluralism and protecting the rights of religious minorities.  If you are a champion of religious freedom, be on the lookout for announcements coming soon.

Third, in just a couple months, the State Department will host a three-day accelerated workshop called Boldline to support and scale innovative public-private partnerships that promote and defend religious freedom around the world.  The open calls for proposals is now live on challenge.gov.

Fourth, we all know that persecution and violence aren’t constrained by borders.  We look forward to announcements by several partner countries who have offered to host follow-up regional conferences to explore specific measures that whole regions can take to promote religious freedom.

And finally, in just a few moments, we’ll release the Potomac Declaration and the Potomac Plan of Action.  The Potomac Declaration is a formal affirmation that says right up front that the United States takes religious freedom seriously, that we will work with others around the world to help those under attack for their beliefs, and that we expect leaders around the world to make it their priority as well.  The plan of action provides concrete ways the international community and governments can do more to protect religious freedom and to protect vulnerable religious communities in their own countries.

In closing, I’d like to thank Ambassador Brownback and his staff for their work on this event.  What you all have done to put this on is remarkable and an incredibly important moment in America’s support for religious freedom.  I want to – I want also to commend the entire State Department for executing an event whose goal is ensuring the sacred right of every man, woman, and child to worship as they please.  There is truly eternal significance in the work that we have done.

I will now invite Ambassador Brownback for a few comments and to take a few questions.  Thank you.