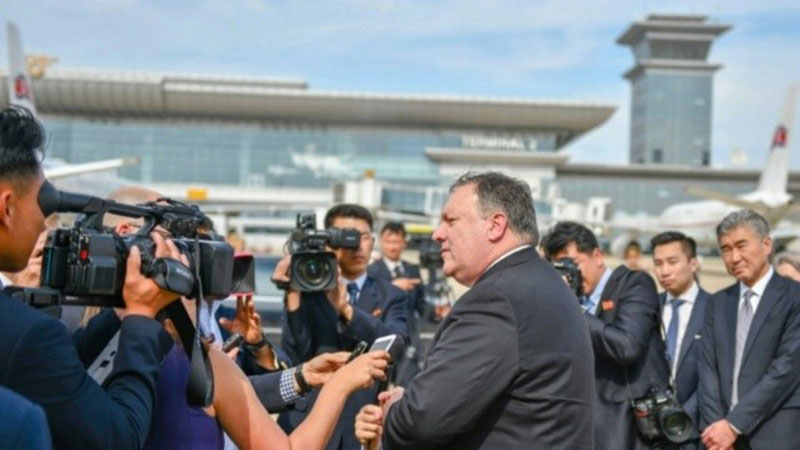 QUESTION: Mr. Secretary, how did the meetings go?

MS NAUERT: The Secretary has some comments he wants to make first.

SECRETARY POMPEO: So yeah, so let me just – a couple things. We had many hours of productive conversations. These are complicated issues, but we made progress on almost all of the central issues. Some places a great deal of progress, other places there’s still more work to be done.

We now have a meeting in Panmunjom set up for July 12 – it could move by one day or two – where there will be discussions between the folks responsible for the repatriation of remains, will take place at the border, and that process will begin to develop over the days that follow. So very productive conversation about the process by which we will deliver on the commitments that were made in the Singapore summit.

The North Koreans also confirmed the missile engine testing facility, we talked about what the modalities would look like for the destruction of that facility as well, and so some progress there as well. And then we have laid out a path for further negotiations at the working level so that the two teams can get together and continue these discussions.

QUESTION: Did you bring up the satellite images that show that the facilities are actually expanding, and what did the North Koreans say when you mentioned that?

SECRETARY POMPEO: Well, your characterization is interesting. We talked about what the North Koreans are continuing to do and how it’s the case we can get our arms around achieving what Chairman Kim and President Trump both agreed to, which was the complete denuclearization of North Korea. There is no – no one walked away from that. They’re still equally committed. Chairman Kim is still committed. I had a chance to speak to President Trump this morning. I know my counterpart spoke with Chairman Kim during the course of our negotiations as well. We had productive, good-faith negotiations.

QUESTION: Mr. Secretary, are you any closer to a sense of a timeline for denuclearization and a baseline declaration for their weapons of mass destruction?

SECRETARY POMPEO: I’m not going to get into the details of our conversations, but we spent a good deal of time talking about each of those two things, and I think we made progress in every element of our discussions.

QUESTION: What was your one deliverable?

SECRETARY POMPEO: Thank you, all.