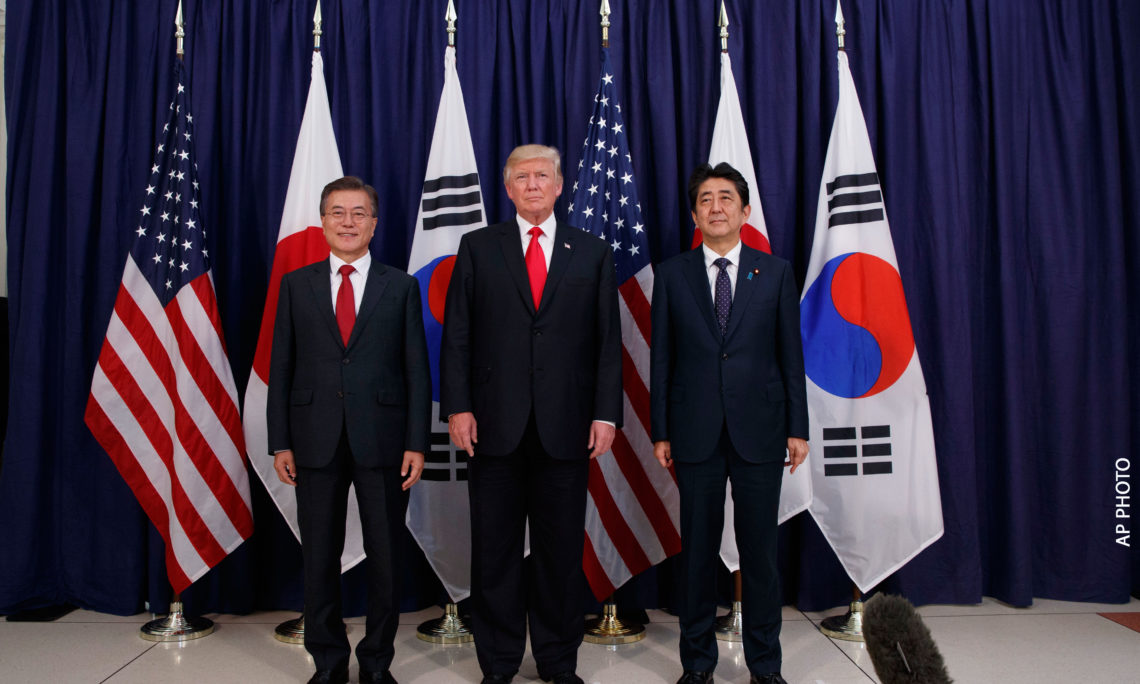 President Donald J. Trump, President Moon Jae-in, and Prime Minister Shinzo Abe met in Hamburg, Germany, on July 6 to discuss the serious and escalating threat posed by the nuclear and ballistic missile programs of the Democratic People’s Republic of Korea (DPRK).  The three leaders condemned the DPRK’s unprecedented launch, on July 4, of a ballistic missile with intercontinental range, a major escalation that directly violates multiple United Nation’s Security Council (UNSC) resolutions and that clearly demonstrates the growing threat the DPRK poses to the United States, the Republic of Korea (ROK), and Japan, as well as other countries around the world.  The leaders affirmed the importance of working together to counter the DPRK threat and to achieve the complete, verifiable, and irreversible denuclearization of the Korean Peninsula in a peaceful manner, a shared goal among the three countries.  They also committed to continue to cooperate to apply maximum pressure on the DPRK to change its path, refrain from provocative and threatening actions, and take steps necessary to return to serious denuclearization dialogue.  The three leaders emphasized that they, together with the rest of the international community, stand ready to offer a brighter future for the DPRK if it chooses the right path. The United States, the ROK, and Japan will never accept a nuclear armed DPRK.

President Trump, President Moon, and Prime Minister Abe decided to press for the early adoption of a new UNSC resolution with additional sanctions to demonstrate to the DPRK that there are serious consequences for its destabilizing, provocative, and escalatory actions.  They called on the international community to swiftly and fully implement all UNSC resolutions and to take measures to reduce economic relations with the DPRK.  The three leaders also called on the nations that border the DPRK to make further efforts to convince the DPRK regime to abandon its current threatening and provocative path and immediately take steps to denuclearize and to halt its ballistic missile program.

The three leaders underscored their commitment to further strengthen their respective alliances and to ensure they continue to increase their capabilities to deter and respond to any attack from the DPRK.  They committed to continue advancing trilateral security cooperation in the face of the threat posed by the DPRK.  President Trump reaffirmed the ironclad commitment of the United States to defend the ROK and Japan using the full range of its conventional and nuclear capabilities.