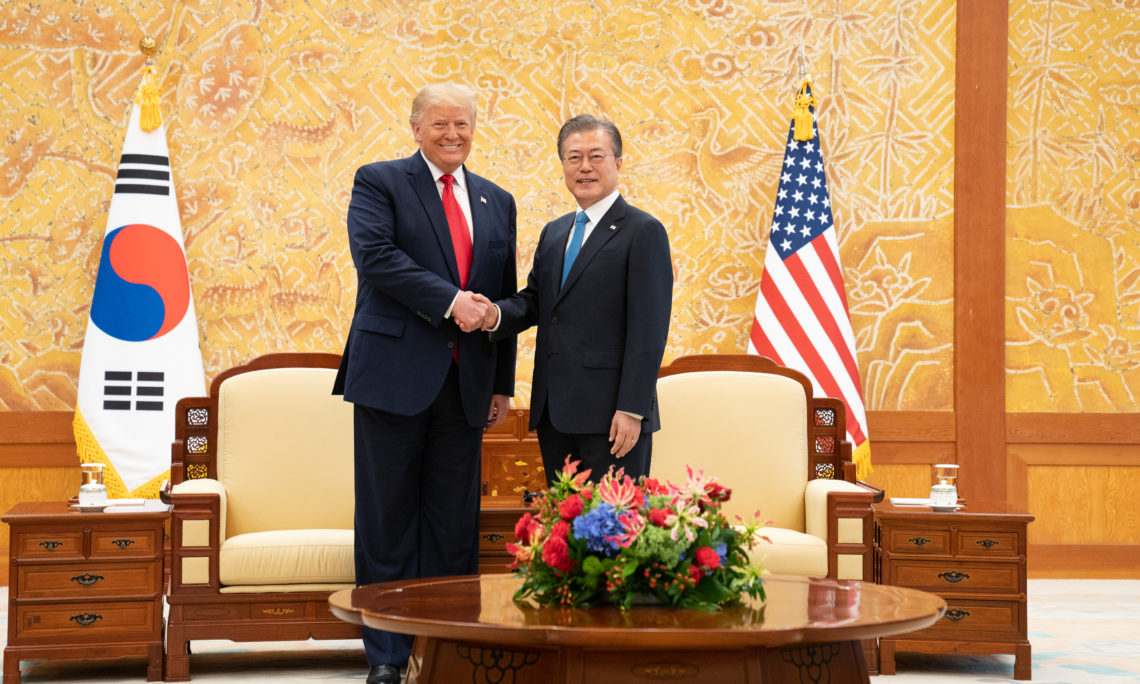 PRESIDENT MOON:  (As interpreted.)  Mr. President, I’d like to thank you for taking the time to visit Korea again after the G20 Summit — as well as your summit meetings with various other leaders, including China — in spite of a plethora of issues that demand you attention, both at home and abroad.  But on behalf of the Korean people, I would like to send a warm welcome to you.

Yesterday, through the tweets that you sent, you actually presented a big hope to everyone, in particular a big hope to the Korean people here.  And when I was looking at that tweet, I could really feel that the flower of peace was truly blossoming on the Korean Peninsula.

If you — Mr. President, if you could meet Chairman Kim at the military demarcation line and have a handshake with him, I believe that that picture, in itself, would represent a historic event.  And also, this would be a significant milestone, in terms of the peace process on the Korean Peninsula that we are — the peace process that we are trying to achieve: complete denuclearization and permanent peace.

PRESIDENT TRUMP:  Thank you.  Well, I’d just like to thank President Moon for the beautiful evening last night.  We celebrated our friendship and we celebrated the new trade deal that we made very recently that went into effect on January 1st, which is a great testament to the relationship of the United States and South Korea.

I also want to thank your First Lady.  She has a tremendous spirit and vitality, and a tremendous love for your country.  I said that to the President.  First thing I said was how impressive the First Lady was, and — a great woman.  A great woman.  So I just hope you tell her that.

And we talked and we had a fairly short meeting, unfortunately.  I wish it could have been longer.  But these are very, very highly respected — no matter where you go in the world, they’re among the greatest in the world.  And you have them right here in South Korea.

I think I could say, with great confidence, that our relationship with South Korea has never been stronger or better.  We have a — just a very good feeling.  There’s a good chemistry between the leaders of both countries.  And Secretary Pompeo is here — Secretary of State.  Mike Bolton — John Bolton is here.  And John was very instrumental in some of the things we did yesterday — some of the meetings we had.  And I want to thank you for that.  And, Mike, I want to thank you for that.

And Mr. Ambassador, Harry, you love this country and that’s so evident, and that’s a great thing.  So thank you very much for being here.  We appreciate it.

So, as most of you know — I assume all of you know, otherwise I guess you wouldn’t be doing what you do — we left Japan yesterday; we were at the G20.  Prime Minister Abe did a fantastic job.  President Moon was there also.  And they really did a great job.  And a lot of the leaders got together.  I was with many leaders from different countries.  I have great relationships with all.

The very interesting meeting, I think, was with China.  And we’re moving along toward a reciprocal but a good trade deal — a fair trade deal.  And we’ll see where that goes, but we had a very, very — good feelings with President Xi and myself.

So we got here late last night, and we’ve been working from that time forward.  And I will say, the treatment that we’ve been given by President Moon and the First Lady has been absolutely fantastic.  And, as you know, a long-planned visit to the DMZ — I’ll be doing that in a little while.  And I look forward to that.

And there’s a possibility that we’ll be meeting Kim Jong Un.  And there’s a possibility that — it’s going to be very interesting.  I don’t know — they want to do it.  Chairman Kim wants to do it.  I’d like to do it.  It’s very complicated, from the standpoint of logistics and security and lots of other reasons.  But both teams are working very hard.  And South Korea is working also on trying to implement it.  But I think it would be good.

Kim Jong Un has been somebody that we’ve gotten along with.  When I first became President, what was happening during our previous — the previous administration was very bad for South Korea and very bad for North Korea, frankly.  There was a lot of bad things happening.  And it’s changed very, very rapidly.  And it’s very positive.  There are a lot of positive things going on right now.

And just in finishing up, I think I can say with great conviction that North Korea and South Korea are both in much better places right now than they were two and half years ago when I became President.  There was tremendous danger.  Tremendous danger.  You people know it well.  You know it better than I do because you had to suffer through it for a long time.  A lot of progress has been made.  I watched some of the news — fake news; it’s only fake news — and they said, “Well, what’s been done.”  Well, it’s like the difference between day and night.

Our ambassador, Harry, was saying on the way in that, when you first got here, there were sirens going off and tests being made, and everybody was practicing for, obviously, a horrible event, and it was really scary.  And he said the difference is so great.

So we’re very proud of what we’ve done.  And I have plenty of time and we’re in no rush, but it’s a lot different than it was two and a half years ago.  It’s a difference like few people can even imagine.

So it’s an honor to have helped.  It’s a great country.  I want to thank, again, President Moon.  And, really, we’re very proud of all of the things we’ve done together, and — both on the military and peace, but also on trade and other things.  The relationship has never been stronger.