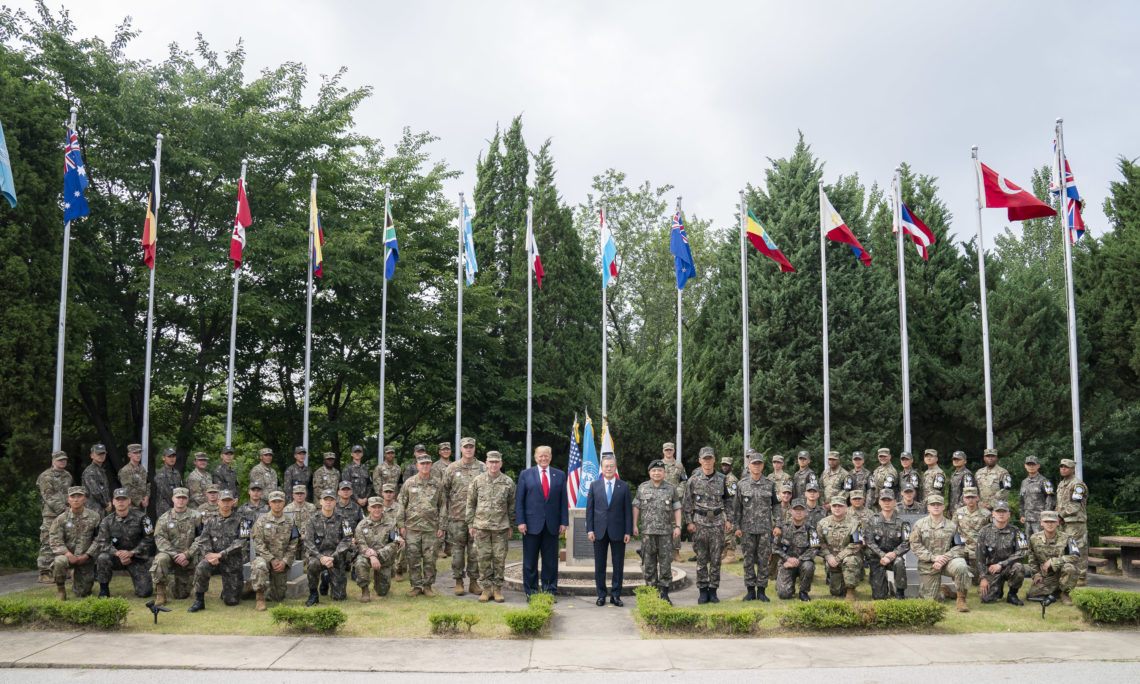 PRESIDENT MOON: (As interpreted.)  I would like to thank you for all your dedication and effort.  You are indeed standing at the forefront of the spark where you are safeguarding peace and freedom of the Republic of Korea.

And today, this afternoon, we have a more dramatic event that awaits us.  And I’d like to thank President Trump for making such a bold decision.

And now, the Joint Security Area is being transformed from the symbol of confrontation and hostilities to the symbol of peace.  And all of you are actually witnesses to this great change.

And the very person who has actually brought this great change about is, of course, President Trump.  He is the proud President of all of you.  (Applause.)

PRESIDENT TRUMP:  So, I want to thank you very much.  You’re a very special group of people.  I just look at you, look how healthy and how strong and how good.  And we really appreciate it.  We appreciate it very much.

So this was a scheduled visit from a number of months ago.  We went from the G20, and I promised your President, President Moon, who is a friend of mine — I said, “We have to see the DMZ.”  And so this was scheduled for a long time ago.

And then, yesterday, I had the idea, “Maybe I’ll call Chairman Kim and see if he wants to say hello.”  So we didn’t give him much notice, but we’ve become — we respect each other.  We respect each other.  Maybe even like each other.  And he’s agreed to meet.  And I’m going to meet him in about four minutes.  So I’m going to cut my speech a little bit short, other than to say you are terrific people.  You’ve done a fantastic job.  And we’re with you all the way.  You know that.

What do you have over there?  That looks good.  (Laughter.)

Everyone knows you’re a golfer.  And there’s some golfers in the room.

GENERAL ABRAMS:  So we got you a — we’re hopeful — I know you get a lot of gifts, but we’re hoping that this one is one that might find some utility for you on one of your golf courses.

So, it’s got your name stenciled on there.  It’s got all three of our commands: United Nations Command, Combined Forces Command, and U.S. Forces Korea.

PRESIDENT TRUMP:  I’ll use it.

GENERAL ABRAMS:  And, of course, this is the most important thing, because our motto here in Korea is, “We Go Together.”  Katchi Kapshida.  And so we’ll hope that when you wear this on the golf course, that you’ll think about the strength and the enduring nature of our ROK-U.S. alliance.

PRESIDENT TRUMP:  Thank you.  Thank you very much.

LIEUTENANT COLONEL MORROW:  At this point, we’re going to actually have you shake a couple hands of some of our heroes.