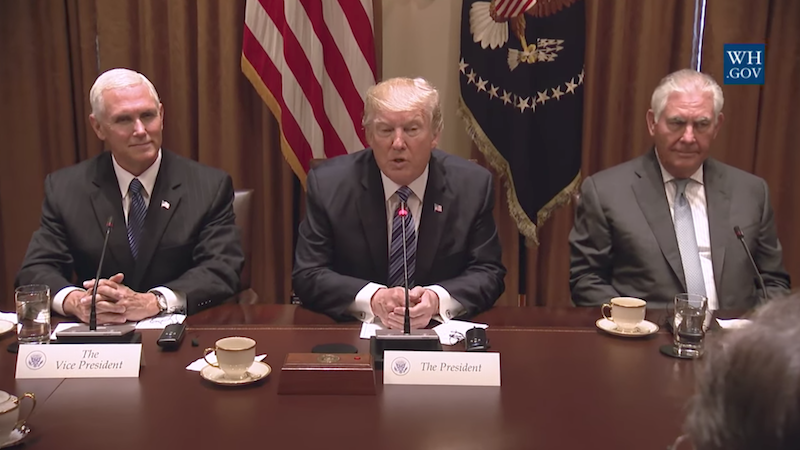 Remarks
The White House
Office of the Press Secretary
For Immediate Release
June 30, 2017

PRESIDENT TRUMP :  I want to thank the President of South Korea, President Moon, for being here.  We had a great afternoon yesterday.  We had fantastic dinner at the White House — accomplished a lot, having to do with our thoughts on North Korea and, very much, our thoughts on trade.

We are renegotiating a trade deal right now as we speak with South Korea, and hopefully it will be an equitable deal — it will be a fair deal to both parties.  It’s been a rough deal for the United States, but I think that it will be much different and it will be good for both parties.  So we’re in the process of doing that.

Thank you very much.  President.

The President will speak.

PRESIDENT MOON :  (As interpreted.)  I would like to thank President Trump once again for inviting me to the White House and for his warm welcome.  When I won the election last month, President Trump was the first among all foreign leaders to call me to congratulate me.  I believe that was to reconfirm the strength of the Korea-U.S. alliance and also President Trump’s warm message to the Korean people who had been suffering through political turmoil.

Last night, at the dinner with President Trump, we discussed various issues through a diverse scope and very honest discussions on issues to include the North Korean nuclear issue and other issues of mutual interest.  It was a great opportunity for us to further the trust and friendship between me and President Trump.  It was also an opportunity for us to reconfirm the fact that the United States and Korea are walking together on the same path towards a great alliance.

Thank you very much, everybody.  Thank you.