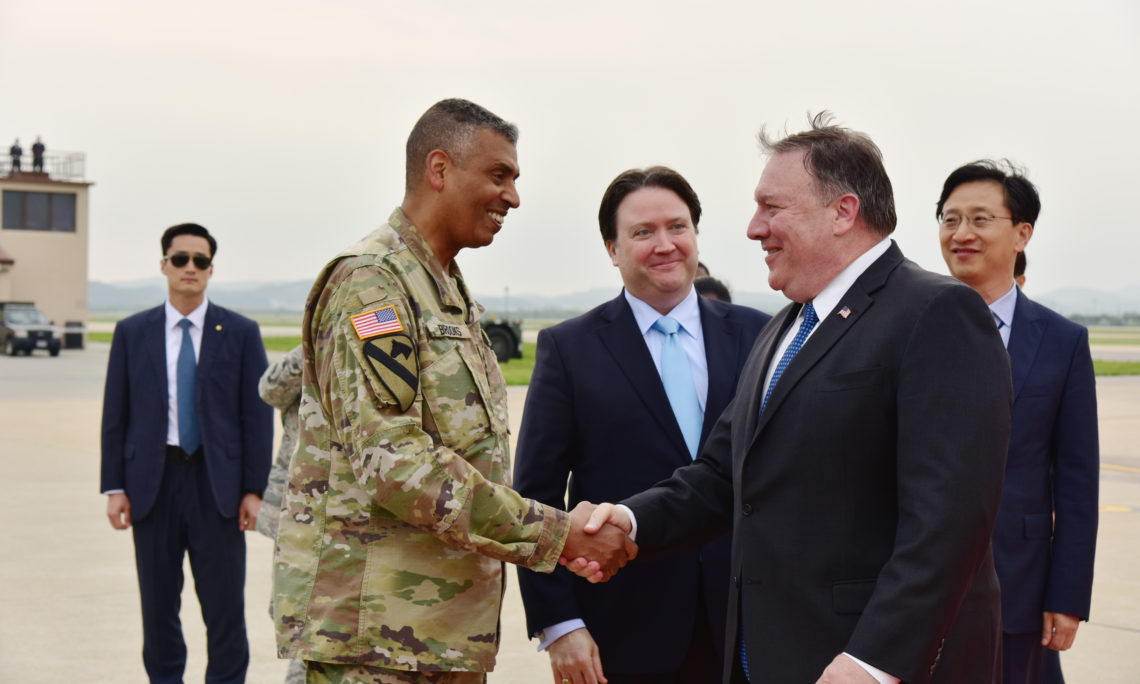 MS NAUERT:  And so this will be on the record, but again, we have the meetings with Japan and South Korea tomorrow, and so we’re not going to get ahead of those.

QUESTION:  So to make the most – the best use of our – most efficient use of our time, Mr. Secretary, thank you very much for talking —

QUESTION:  — with us.  My question pertains to President Trump’s decision to suspend major military exercises on the Korean Peninsula.  There was a reason why these exercises have been done for all these years, according to the Pentagon, in terms of helping the U.S. practice its ability to reinforce in a crisis.  Is this decision to cancel the exercises open-ended, or would you resume the exercises if you concluded the North is not engaging seriously in the talks?  And can you tell, please, a little bit about the process for deciding to suspend the exercises?  Did you ask for guidance from USFK, from DOD, from the South Koreans on whether and how to do this?

SECRETARY POMPEO:  So I’m not going to talk to internal processes and discussions that were had.  But it – the President was very clear.  I was present when the discussion took place.  He made it very clear that the condition precedent for the exercises not to proceed was a productive, good-faith negotiations being ongoing.  And at the point it’s concluded that they are not, the President’s commitment to not have those joint exercises take place will no longer be in effect.  I mean, he was unambiguous about that and how he communicated it both I think at the press conference but certainly when he was with Chairman Kim as well.

QUESTION:  I want to – could – the President also talked about you being in the lead of the negotiations in the future, and also that there will be a meeting I guess at the White House next week to discuss the – how you take it forward.  What are the next steps, and when will you be meeting with the North Koreans again, with Kim Yong-chol, for instance?

SECRETARY POMPEO:  So on this issue it should be very clear that the President is in the lead.  Having said that, I will be the person who takes the role of driving this process forward.  I don’t know exactly what the timing will be for our next conversation with North Korea.  I would anticipate it will be fairly quickly after we return to our home countries.  I don’t know exactly what form that will take, but I’m very confident that by some time in the next week or so we will begin the engagement.

There was a great deal of work done over days and days and days in Panmunjom that led to the discussions that took place there in Singapore for whatever it was, 70 hours or 60 hours, whatever the two sets of teams were on the ground.  So there’s – not all of that work appeared in the final document, but lots of other places where there were understandings reached.  We couldn’t reduce them to writing, so that means there’s still some work to do, but there was a great deal of work done that is beyond what was seen in the final document that will be the place that we’ll begin when we return to our conversations.

QUESTION:  I wanted to follow up just quickly on one thing that you said to Michael.  Why would the President use the term “provocative,” though, to describe the military exercises when that’s a term that often North Koreans and the Chinese use, and we’ve said that they are – that they’re long planned and for purposes of readiness?

SECRETARY POMPEO:  Yeah.  I mean, I think – I think the President was very clear.  His intention here was to put us in a place where we get the opportunity to have productive conversations connected to the denuclearization of North Korea.  Our mission hasn’t changed, right.  A lot has been made of the fact that the word “verifiable” didn’t appear in the agreement.  Let me assure you that the “complete” encompasses verifiable in the minds of everyone concerned.  One can’t completely denuclearize without validating, authenticating – you pick the word.

The President’s committed to that.  He believes that having made this commitment to Chairman Kim, that so long as we were making progress and having good-faith, productive conversations that we were setting the right conditions for moving forward with those talks.  I think that’s what the President was thinking of when he made that commitment to him.

QUESTION:  Mr. Secretary, I wanted to ask you about “verifiable and irreversible.”

QUESTION:  How is it in the statement? And I am also —

SECRETARY POMPEO:  You’re just – because “complete” encompasses verifiable and irreversible.  It just – I suppose we – you could argue semantics, but let me assure you that it’s in the document.

QUESTION:  And the President said it will be verified.

SECRETARY POMPEO:  Of course it will.

QUESTION:  Can you tell us a little bit more about —

SECRETARY POMPEO:  Of course it will.  I mean —

QUESTION:  — what is – what discussed about how?

SECRETARY POMPEO:  Just so you know, you could ask me this – I find that question insulting and ridiculous and, frankly, ludicrous.  I just have to be honest with you.  It’s a game and one ought not play games with serious matters like this.

QUESTION:  But how will it be verified?  Did you discuss that?  Do you have —

SECRETARY POMPEO:  It’s unhelpful for your readers, your listeners, for the world.  It’s – because it doesn’t remotely reflect the American position or the understandings that the North Koreans have either.

QUESTION:  We’re just trying to understand how it reflects what you asked that —

SECRETARY POMPEO:  Yeah, and I just articulated that for you.

QUESTION:  Can I – just to help him with his question and as a question, the – a big issue is you – I think you identified yourself as been the pace at which —

QUESTION:  — dismantlement might occur with the North, preferring a phased and somewhat prolonged approach and President Trump emphasized the need for rapid nuclear dismantlement.  That issue is not illuminated in the document.  In your private talks, have you had closure on that, and how and where does that stand?

SECRETARY POMPEO:  I’m not going to give any insight into where we are on private talks.  You should know that that will be my practice every day we’re in conversations with them.

QUESTION:  I would just – Mr. Secretary, in Francesca’s defense, I would say that you’ve been very specific on this idea of CVID.

QUESTION:  So the language is important and we want to be able to get a real sense for what exactly North Korea agreed to, and that leads to my question, which is:  There is some skepticism about that given that KCNA now is saying that President Trump agreed on a step-by-step approach which seems to be inconsistent with what you had demanded previously.  Are you concerned about the messaging coming out of North Korea that maybe they have a different idea of what was agreed to at the summit?  And then we also had the President who got off the plane and said there is no longer a nuclear threat in North Korea, even though they haven’t given up their weapons yet.

SECRETARY POMPEO:  Well, I’m not concerned about what was communicated to the North Koreans and what I understand them to believe given the conversations – multiple conversations, not just the time with President Trump but certainly that time with President Trump.  But I had had two conversations with Chairman Kim before that as well, I’ve spent even more hours with that – with Kim Yong-chol.  I am confident that they understand what we’re prepared to do, a handful of things we’re likely not prepared to do.  And you began your question with the same question that was asked earlier.  I am equally confident they understand that there will be in-depth verification.

QUESTION:  Was the North account of the meeting accurate when they said that President Trump had agreed to a phased approach?

SECRETARY POMPEO:  I’m going to leave the content of our discussions as between the two parties, but one should heavily discount some things that are written in other places —

QUESTION:  Can I ask one verification question?

SECRETARY POMPEO:  — including from some of your colleagues.

QUESTION:  Well, I was just asking about your interlocutors, the North.

SECRETARY POMPEO:  Yes, and I know exactly what was said.

QUESTION:  The President also mentioned that North Koreans had destroyed test sites, including the missile engine test site.  Have we been able to verify the depth of the destruction and whether or not there are permanent – permanently destroyed?

QUESTION:  Would you like to accomplish major nuclear disarmament before President Trump’s first term in office ends?  Is that your objective?

MS NAUERT:  This is the last question.

QUESTION:  Well, let him do the last one because I —

SECRETARY POMPEO:  Make sure – make sure – could you ask the question one more time?  Because it seems very obvious to me.  The question seems – the answer almost speaks for itself.

QUESTION:  I don’t know.  I’m not in the administration.

QUESTION:  I can’t speak for the administration, but —

QUESTION:  Well, maybe have you set any deadline by which —

QUESTION:  — time the North Koreans must have done —

QUESTION:  And would you like those major steps to be taken in the next two years?

SECRETARY POMPEO:  Oh, yes, most definitely, absolutely.  With respect to timelines, I don’t want to get into that.  There is a public timeline that’s been – been out there, right – the North Koreans and the South Koreans have spoken of timeframes.  The President has said, and it’s common knowledge, the work itself takes some amount of time.  We have big teams ready to go.  We’ve been working on it for months to have all of the relevant parties from our labs, smartest folks – by the way, not just Americans, but partners around the world.  We’re prepared to execute this once we’re in position that we can actually get to a place where we can do it.  So I’m confident that the long pole in the tent will be our capacity to negotiate to that place, but I’m hopeful we can move that forward fairly quickly as well.

QUESTION:  So absolutely for —

SECRETARY POMPEO:  Yeah, so most certainly in the President’s first term.

QUESTION:  Well, and I’m sorry, what did it refer to?

MS NAUERT:  Guys, the Secretary has to go.  Guys.

QUESTION:  And what in the President’s full term?

QUESTION:  You’re hopeful, but have you set a deadline for the North Koreans?

SECRETARY POMPEO:  We’re hopeful we get it done.  There’s a lot of work left to do.

MS NAUERT:  All right.  Thank you, everybody.

QUESTION:  Thank you very much.

SECRETARY POMPEO:  All right.  Thanks, everybody.

SECRETARY POMPEO:  You all have a good night.

QUESTION:  Thanks a lot.

SECRETARY POMPEO:  Yeah.  Get some rest.