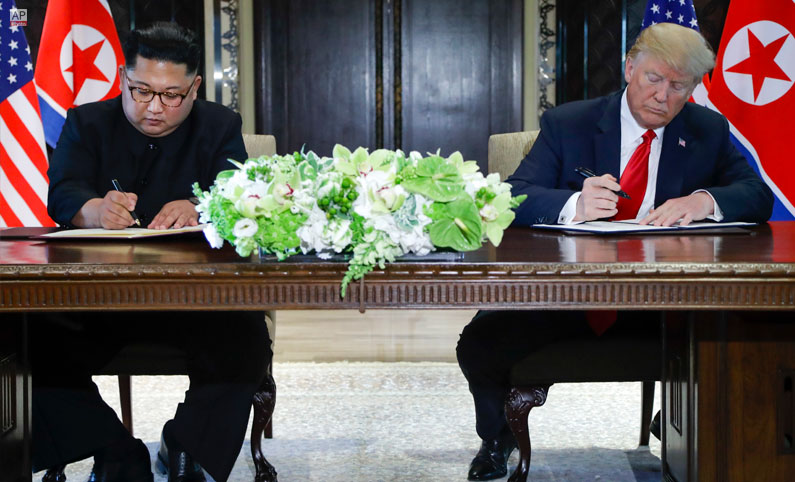 PRESIDENT TRUMP:  So we’re signing a very important document, a pretty comprehensive document.  And we’ve had a really great time together, a great relationship.  I’ll be giving a news conference at 2:30, which is in a little bit less than two hours.  And we’ll discuss this at great length.  In the meantime, I believe that they’ll be handing it out on behalf of Chairman Kim or myself.  And we’re both very honored to sign the document.  Thank you.

Would you like to say something to the press?

CHAIRMAN KIM:  (As interpreted.)  Today we had a historic meeting and decided to leave the past behind.  And we are about to sign a historic document.  The world will see a major change.

I would like to express my gratitude to President Trump to make this meeting happen.  Thank you.

PRESIDENT TRUMP:  Thank you very much.

Q    Mr. President, did he agree to denuclearize, sir?

Q    Did you talk about Otto Warmbier, sir?

Q    Mr. Kim, did you agree to give up your nuclear arms?

PRESIDENT TRUMP:  You’ll be seeing everything in just a little while.  The letter that we’re signing is very comprehensive, and I think both sides are going to be very impressed with the result.  A lot of goodwill went into this, a lot of work, a lot of preparation.  I want to thank everybody on both sides.  Secretary Pompeo and all of his counterparts, they were absolutely fantastic.

Thank you.  Thank you to all of your representatives very much.

Thank you very much, everybody.  Thank you.

Q    Will you invite Chairman Kim to the White House?

PRESIDENT TRUMP:  Absolutely, I will.