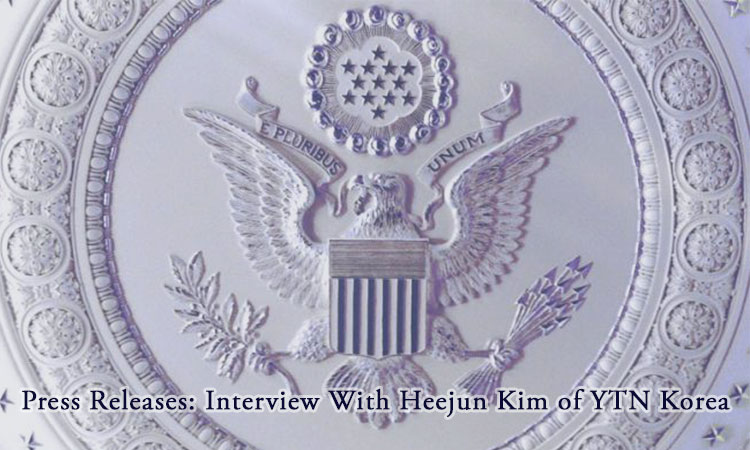 QUESTION: Actually, my first question is: Today, President Trump said he is totally prepared for the – this upcoming summit, but there is some speculations that the U.S. and North Korea have still not prepared to iron out about the CVID and a few issues. So people say that this time that both side want some just broad framework, not specifically (inaudible) steps. So what is your comment on this?

SECRETARY POMPEO: So President Trump has made clear that it is not likely that this will all fall away in a single meeting. He’s talked about that consistently. And in fact, there has been a great deal of work already done, so much preparation done by our team as well as preparation by President Trump. He is ready to meet Chairman Kim Jong-un and talk about this incredibly historic opportunity to truly, fundamentally change the relationship between North Korea and the world – importantly between North and South Korea, but fundamentally between North Korea and the world – and provide the security assurances that they need such that they are comfortable that denuclearization is something that they can achieve.

SECRETARY POMPEO: We’ll have to see how the summit proceeds. As President Trump has said, it could be that the summit won’t be successful. It could be that there – ultimately there is not an agreement between the two leaders. But in the event that we are successful as we are hopeful that we will be, yes, I would hope that there would be a statement that they would put out that each could agree to. But we’ll have to see. President Trump has said repeatedly he’s prepared to make big changes and to undertake bold action; and if Chairman Kim Jong-un is prepared to do that, so is the United States of America.

QUESTION: First phase of denuclearization does the U.S. want North Korea to ship some nuclear warhead or ICBM oversea within six months or – and do you have to agree to – I mean, do they have to agree to report or get some inspection for the undeclared nuclear site to get relief, sanction relief?

SECRETARY POMPEO: So I don’t want to get too far into the details, but when you think about complete denuclearization, it would certainly be all of their sites, not just those that have been declared, right? So we’ve got to make sure that it’s complete. That takes a great deal of work, a great big commitment on the part of North Korea as well, and there’ll be a parallel set of security assurances that are also big and bold and different.

What’s important here is that this has been tried many times before. The challenge to denuclearize North Korea for the world is longstanding, and the problem has only grown worse. President Trump is committed to putting together an effort where the two leaders can make a decision that is good for both their countries and the world.

QUESTION: President Trump said that there could be declarations of a end of war at this meeting, so is it means the declarations with U.S. and North Korea, or could it be possible by the – through this three-way summit between Trump, Moon, and Kim?

SECRETARY POMPEO: So the summit is between the United States and North Korea, but the ultimate resolution of the problem will take lots of willing partners. Certainly, North Korea will have to make decisions, so will the United States, and so will China. North Korea has already made a number of decisions, and it’ll have to do more. Japan, too, will be central to the ultimate resolution here, because if you remember what we’re ultimately looking for, we’re looking for a safe, secure, and prosperous North Korea. That will only happen when its neighbors, the people in its region, are prepared to do the things that only they can do to make North Korea safe, secure, and prosperous.

QUESTION: (Inaudible) denuclearization steps U.S. could establish a liaison office between Washington and Pyongyang and the – start negotiations to normalize your relationship?

SECRETARY POMPEO: So some of that will – discussion will start to take place very quickly, I would imagine. But remember what we’re looking for here. It can’t be the case that it’s just a piece of paper or promises. We need to see real action. Both sides need to see real action and commitment that comes from the two leaders getting together – the only thing that could potentially lead to those kinds of actions.

QUESTION: What was the – I’m so sorry, I’m on – just last questions. You suggested the —

QUESTION: Yes. You suggested a strong, connected, and secured and prosperous vision of future of North Korea, so how can you achieve the visions? Is it through the financial support for North Korea, Japan, and China (inaudible)?

SECRETARY POMPEO: Yes. So it would be our expectation that the countries in the region would provide the initial financial support for just that; but over time, we would hope that, much like the other countries in the region, it would be able to achieve exactly what I described – a connected, safe, secure North Korea without outside assistance. It would be the opening up of the country, it would be their connectedness, it would be their ability to prosper on their own feet. The North Korean people are industrious people and they’re quite capable, and so we would hope that their – while it may take resources at the front end to assist them to move in that direction, but we have great confidence in the North Korean people to achieve this themselves over some period.

QUESTION: What about the —

QUESTION: Thank you. Thank you so much.