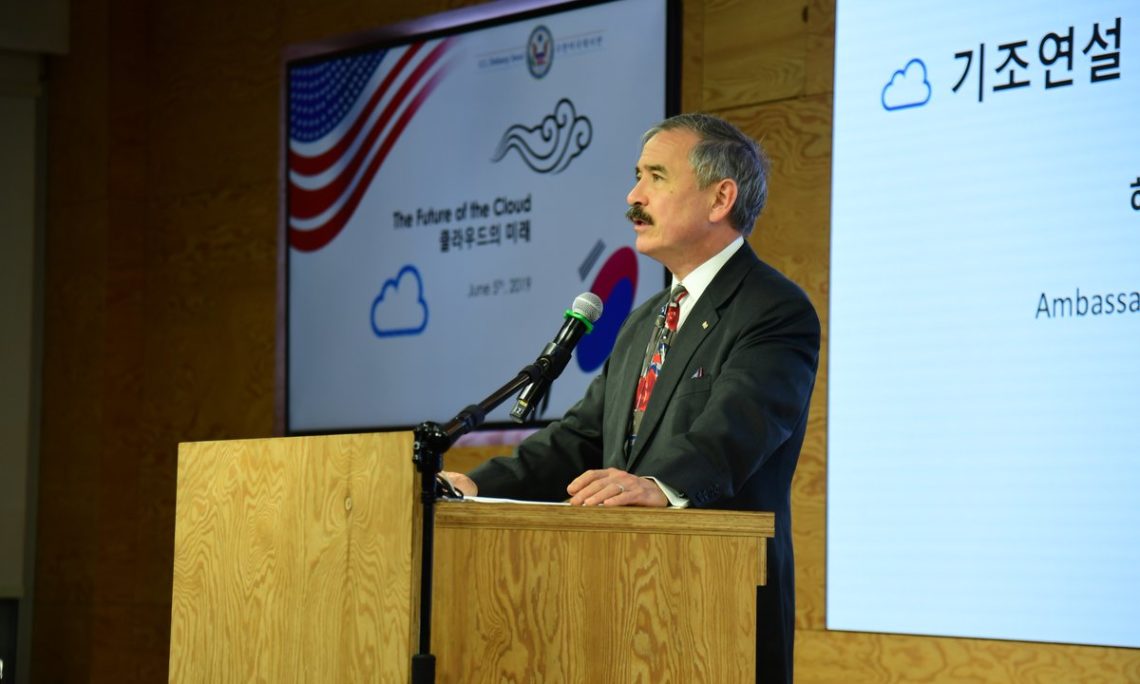 Thank you all for being here this afternoon, especially Representative Choung Byoung-gug and Director General Kwon Jun-wook. I’d also like to thank K-Internet for collaborating with us on this event. Under the leadership of Chairperson Han Seong-sook and Secretary General Park Seong-ho, who you just listened to. They’ve done some incredible work in recent years, to the benefit of both Korean and foreign companies operating in the digital space. And, thanks of course to Facebook for providing a beautiful location in which to have meaningful discussions and to make connections – after all, I think that’s what your specialty is. I had a great tour of your facility earlier, though it did make me a little tired. Those start-up entrepreneur bunk-beds are looking pretty good right now. And also the food everywhere, I was really impressed by that.

So today’s topic is cloud computing, one of the many emerging technologies where partnerships between U.S. and South Korean companies have expanded tech frontiers and opened up new possibilities. The companies represented in today’s panel show us that innovation comes in many forms, and that the cloud has the power to transform a variety of sectors, from life-saving efforts like disaster response and healthcare to social media, cybersecurity and food delivery.

The Korean government has taken some important steps forward in the digital economy, such as allowing financial services firms starting this year to use the cloud and encouraging innovation through the regulatory sandbox initiative. These polices are in line with President Moon’s vision for Korea’s role in the Fourth Industrial Revolution: fostering innovation to the benefit of individuals and families from all walks of life. Minister for Science and ICT You Young-min and KISA President Kim Seok-hwan have pointed out further steps are needed in order to create the space that the tech industry leaders and individual entrepreneurs alike need in order to create, test and grow truly innovative solutions to the challenges of modern life. This is crucial, in my opinion, to make the most of collaborations between our two nations.

A positive next step would be ending data localization requirements in my view. Data localization stifles innovation and efficiency, and it hurts the economy. Korean businesses would lose access to technology, partnerships, and cost efficiencies that are only available with the cloud. Individual Koreans would have reduced consumer choice and no access to global standards of data protection. The whole point of cloud computing is to remove barriers to information flow. Data localization would add barriers by building a virtual wall that would separate Korea’s entrepreneurs and SMEs from the world market.

A positive next step would be ending data localization requirements, as I said. A cornerstone principle of both Korea’s New Southern Policy and the U.S. vision for a free and open Indo-Pacific is freedom of movement. Greater opportunities and efficiencies come with the ability to move ideas and services unimpeded from one place to another, to form partnerships in New York and San Francisco to Seoul and Busan, and to Hanoi and New Delhi, and beyond.

It’s also integral to the very concept of cloud computing, on the most fundamental of levels. Clouds, if you look outside, you know clouds form, disperse, and re-form freely, unhindered by national boundaries. So as we advance along the cutting edge of this new fourth industrial revolution, it’s critical that we extend this concept of freedom of movement to include information. With proper security measures in place, cross-border data flows will unlock possibilities that were previously unimaginable.

I want to also congratulate South Korea on being a world leader in 5G technology, which will only make cloud computing that much more important and useful. 5G promises to change our lives in ways that we can’t even imagine. But, along with these new possibilities come new risks. Cyberspace becomes even more critical as we establish a widespread, fully-functioning 5G framework for use by individuals, by the private and public sectors, and businesses. Effective rules-based security is crucial to safeguarding communications between allies over a 5G network. Decisions made today regarding 5G networks will have national security implications for decades. That is why it is important to consider these decisions very thoroughly and closely. Security cannot be piecemeal. As U.S. Secretary of State Mike Pompeo explained, “[T]he world wants systems they can trust.” And while short-term cost savings may be tempting, the longer-term risks and mitigation costs that come with untrustworthy suppliers are very real and very large. Choosing a trusted supplier makes security and financial sense.

With that, I’ll turn things over to the experts. The companies gathered here today are great examples of how our two nations work together to bring out the best in each other and build on each other’s strengths. We are stronger together than either of us separately could hope to be on our own.

So ladies and gentlemen, thank you very much for your attention and I wish you the best conference that you can have. Thank you.