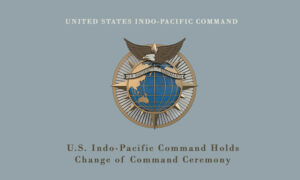 Secretary of Defense James N. Mattis presided over the ceremony. During his remarks Mattis praised Harris’ tenure and highlighted the importance for strong leadership in the Indo-Pacific area of responsibility.

“PACOM is our primary combatant command, standing watch and intimately engaged with over half of the earth’s surface and its diverse population,” said Mattis. “The United States is today and has been for two centuries a Pacific nation.”

Harris, born in Japan and reared in Tennessee and Florida, is a 1978 graduate of the U.S. Naval Academy and began his tour as the 24th PACOM commander in 2015.

“Men and women of the U.S. Pacific Command, and your families…what you do on a daily basis is of fundamental importance to our nation’s defense. I’m proud to serve alongside you,” said Harris.

At a time of increasing contention in the region, Harris conveyed his respect and confidence in his successor to the critical post in the Indo-Pacific.

“Admiral Phil Davidson is well-suited to operate in the complex international milieu that is the Pacific Command in the 21st Century,” said Harris. “He understands completely both his strategic and operational responsibilities. I’m pleased, indeed gratified, that I leave this post in his hands…a battle tested leader whose experiences and expertise span the globe in a multitude of important security and operational assignments.”

Davidson, a native of St. Louis, Mo. and 1982 graduate of the U.S. Naval Academy, reflected on U.S. Pacific Command’s pivotal role in regional peace and security, and reiterated American commitment to the region and our allies and partners.

“For more than 70 years, the Indo-Pacific has been largely peaceful,” said Davidson. “In most ways, this was made possible by two things: the commitment of free nations to the free and open international order… and the credibility of the combat power within U.S. Pacific Command… To our allies here in the Indo-Pacific, you will have no better ally. To our partners, I look forward to advancing our partnership in a way that serves our mutual interests.”

Ashore, Davidson has served in fleet, interagency and joint tours as a flag officer. He was previously the director, Maritime Operations, U. S. Fleet Forces Command, the senior military advisor to the Special Representative for Afghanistan and Pakistan (SRAP) at the State Department, and the deputy director for Strategy and Policy in the Joint Staff/J-5.

He served earlier in his career in policy, strategy and operations billets on multiple tours with the U.S. Pacific Fleet staff, the Navy staff and the Joint Staff, and as the Navy’s military aide to the vice president of the United States.

During the ceremony, Mattis announced that PACOM was changing its name as well as its commander.

“In recognition of the increasing connectivity between the Indian and Pacific oceans, today we rename the U.S. Pacific Command to U.S. Indo-Pacific Command,” said Mattis. “Over many decades this command has repeatedly adapted to changing circumstances and today carries that legacy forward as America focuses west.”

USINDOPACOM protects and defends, in concert with other U.S. Government agencies, the territory of the United States, its people, and its interests. With allies and partners, USINDOPACOM is committed to enhancing stability in the Indo-Pacific region by promoting security cooperation, encouraging peaceful development, responding to contingencies, deterring aggression, and, when necessary, fighting to win. This approach is based on partnership, presence, and military readiness.