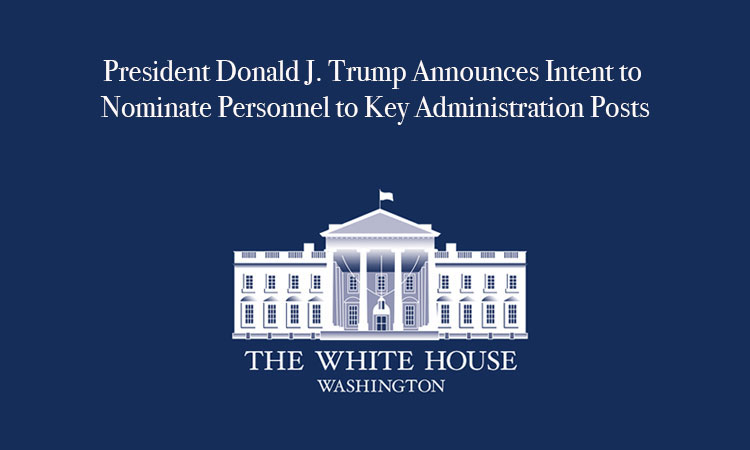 Christopher Fall of Virginia, to be Director of the Office of Science at the Department of Energy.

Dr. Chris Fall is the Principal Deputy Director of the Advanced Research Projects Agency – Energy. Dr. Fall served most recently for over six years with the Office of Naval Research, including as Innovation Fellow, as Director of the International Liaison Office, as Deputy Director of Research for STEM and Workforce, and finally as acting Chief Scientist. During this time, he also served for three years at the White House Office of Science and Technology Policy as Assistant Director for Defense Programs and then as acting Lead for the National Security and International Affairs Division. Dr. Fall earned a Ph.D. in Neuroscience and a B.S. in Mechanical Engineering from the University of Virginia, as well as a master of business administration from the Kellogg School of Management. He was previously a postdoctoral fellow or faculty member at the University of California at Davis, New York University, and the University of Illinois at Chicago.

Christine J. Toretti of Pennsylvania, to be Ambassador Extraordinary and Plenipotentiary of the United States of America to the Republic of Malta.

Ms. Toretti is an accomplished businesswoman, philanthropist and civic leader. She was President and CEO of the S.W. Jack Drilling Company for over two decades. She has served as vice chair of the Rural Telephone Bank, U.S. Department of Agriculture, as a member of the National Petroleum Council, and on the advisory board for the U.S. Secretary of Energy. Ms. Toretti was also a director of the Pittsburgh branch of the Federal Reserve Bank of Cleveland. Ms. Toretti has been Republican National Committeewoman from Pennsylvania since 1997 and founded the Anne Anstine Excellence in Public Service Series and the Dodie Londen Excellence in Public Service Series, to educate, empower and advance women in politics. She received her B.S. from the University of Virginia.

Harry B. Harris Jr. of Florida, to be Ambassador Extraordinary and Plenipotentiary of the United States of America to the Republic of Korea.

Admiral Harry B. Harris, Jr. currently serves as the 24th commander of U.S. Pacific Command. A highly decorated, combat proven Naval officer with extensive knowledge, leadership, and geopolitical expertise in the Indo-Pacific region, he graduated from the U.S. Naval Academy in 1978 and was designated a naval flight officer in 1979. He earned a M.P.A. from Harvard’s Kennedy School of Government, a M.A. from Georgetown’s School of Foreign Service, and attended Oxford University. During his 40-year career, he served in every geographic combatant command region, and he has held seven command assignments, including the U.S. Pacific Fleet, the U.S. Sixth Fleet, and VP-46. He and his wife, Bruni, live in Hawaii.

Ronald Gidwitz of Illinois, to be Ambassador Extraordinary and Plenipotentiary of the United States of America to the Kingdom of Belgium.

Mr. Gidwitz is a partner in GCG Partners and previously led Helene Curtis Industries as President and Chief Executive Officer. Mr. Gidwitz is also Chicago regional chair of the Business Executives for National Security and, for almost thirty consecutive years, and led three important public institutions; the Chicago Economic Development Commission, the City Colleges of Chicago, and the Illinois State Board of Education. In addition, Mr. Gidwitz chaired the Illinois Governor’s Blue Ribbon Task Force on Workforce Development and the Boys & Girls Clubs of America. Mr. Gidwitz earned a B.A. from Brown University, Providence Rhode Island. He has received numerous honors and awards including the Bertha Palmer Distinguished Civic Leadership Award from the Chicago Historical Society and been named Laureate by the Lincoln Academy of Illinois.