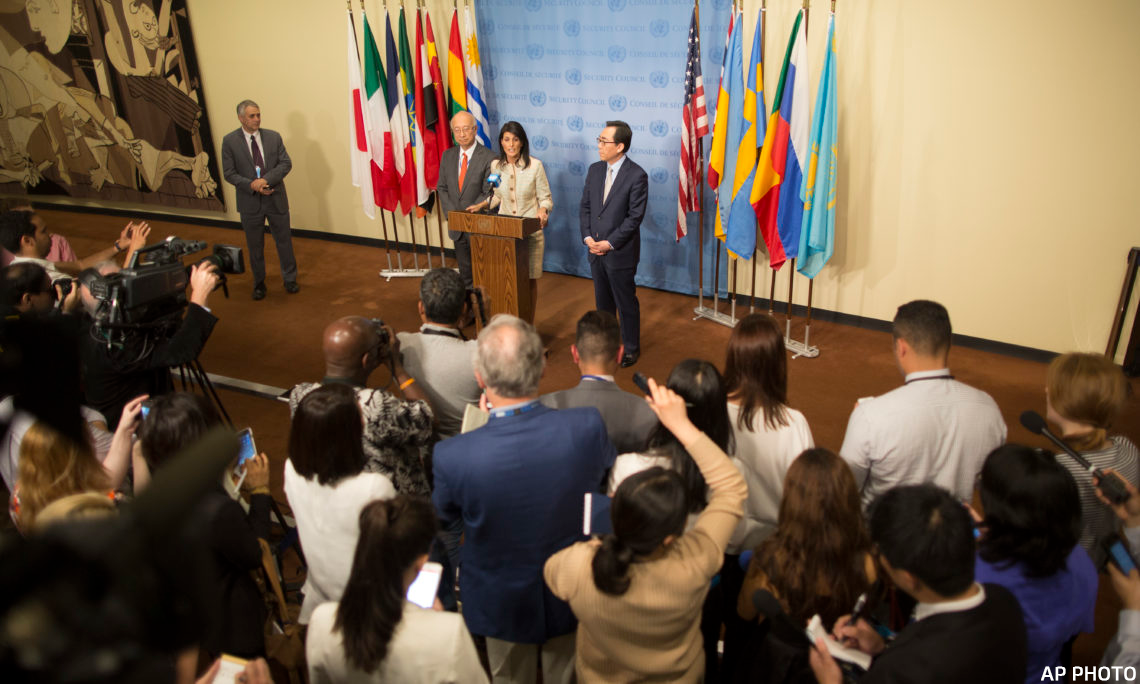 Good afternoon, everyone. We wanted to call this press conference because, obviously, the United States, along with Japan and South Korea, are extremely concerned about what is coming out of North Korea these days. The three of us have all asked for a Security Council emergency meeting, which we will be going into. But really, if you look at the process, we’ve been talking constantly about test after test after test from North Korea. But now we’re seeing the longest ballistic test that we’ve seen so far. Then we’re hearing the rhetoric of “anytime, anyplace.” And we’re not going to continue to just say go ahead and test as often as you want.

This has become more than just a problem; this is a true threat to every country in the world. And what you have is a leader who is paranoid. He thinks that we’re trying to have regime change. He thinks there’s people trying to assassinate him. We’re not trying to do any of those things. What we are saying is, for peace on the Korean peninsula, he has to stop this testing; he has to stop any nuclear programs that he has. The United States – we are willing to talk, but not until we see a total stop of the nuclear process and of any test there.

As you look at this test, Russia should be extremely concerned at the fact that they came within 60 miles of their border. We have often been concerned about South Korea and Japan. We will continue to have their backs. We’re going to continue all of our military exercises with South Korea because we think it’s important in order to protect them. We’re going to continue to have the back of Japan, because we think that’s important. But we’re trying to also have the backs the region.

This is something where we have to turn around and tell the entire international community: you either support North Korea, or you support us, because that’s what it comes down to. You are either with North Korea or you are not. And what that means is when we’re talking about sanctions, are these countries putting these sanctions into effect? Are these countries actually following through on the sanctions that they’re supposed to? We want to look at the current sanctions in place, and we want to look at strengthening the sanctions.

And I would caution the countries that – we have worked well with China. They have really tried to help us in our communications with North Korea, but we’ve seen where they have strengthened sanctions. Other countries are trying to fill that void. And I will tell you that if you are a country that is supplying or supporting North Korea, we will call you out on it. We will make sure that everyone knows who you are, and we will target those sanctions towards you as well.