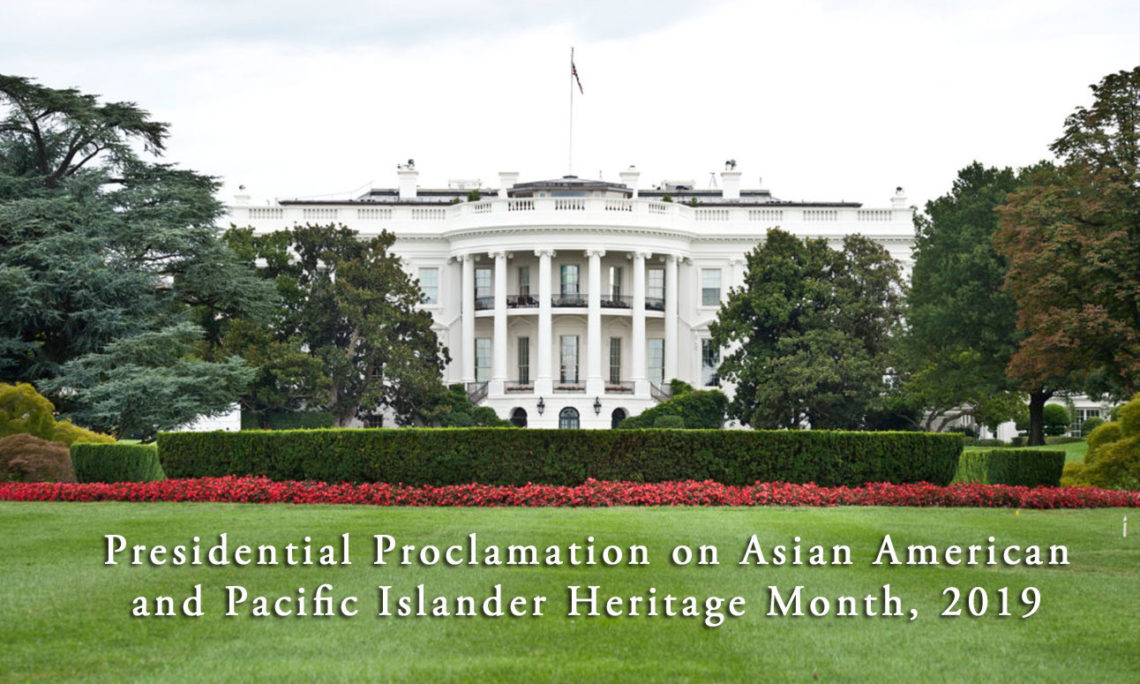 The contributions of Americans of Asian and Pacific Islander descent are firmly woven into the diverse fabric of our Nation.  During Asian American and Pacific Islander Heritage Month, we celebrate the remarkable accomplishments of Americans of Asian and Pacific Islander heritage that have enriched our great country and helped define our history.  These Americans bolster our economy as entrepreneurs, business owners, and employees who initiate and expand opportunities for their families, communities, and country.  Their languages, art, cuisine, and other cultural elements have enriched the American experience, and many have fearlessly answered the call of duty to defend our freedom as members of our Armed Forces.

Japanese American Ellison Onizuka embodied the pioneering spirit of America.  Colonel Onizuka served as a flight test engineer and pilot in the United States Air Force, and in 1978, he was chosen for the NASA astronaut program.  His first mission took place aboard the Space Shuttle Discovery, where he completed 74 hours in space and 48 orbits around the Earth –becoming the first Asian American to enter space.  Tragically, his next assignment was as a crewmember onboard the Space Shuttle Challenger.  He, along with six other brave Americans, perished in the horrific accident that ended the mission.  Colonel Onizuka was posthumously awarded the Congressional Space Medal of Honor for his achievements and sacrifice for our country.

The son of Chinese immigrants, Hiram Fong was yet another of the many great Americans of Asian and Pacific Islander descent who have made profound contributions to the American enterprise.  As a military veteran, lawyer, and businessman from Hawaii, he was the first ever American of Asian ancestry elected to the United States Senate.  His legacy of public service and entrepreneurship continues to be an encouragement for others to achieve the American Dream.

This month, we honor the more than 20 million Asian Americans and Pacific Islanders who call America home, and we express our sincere gratitude to all those who are selflessly serving in the Armed Forces.  We recognize the achievements of Americans of Asian American and Pacific Islander heritage in education, business, science, the arts, government, and the Armed Forces, which have strengthened our Nation.  We celebrate their story as a unique part of the American story.

NOW, THEREFORE, I, DONALD J. TRUMP, President of the United States of America, by virtue of the authority vested in me by the Constitution and the laws of the United States, do hereby proclaim May 2019 as Asian American and Pacific Islander Heritage Month.  The Congress, by Public Law 102-450, as amended, has also designated the month of May each year as “Asian/Pacific American Heritage Month.”  I encourage all Americans to learn more about those of Asian American, Native Hawaiian, and Pacific Islander heritage and to observe this month with appropriate programs and activities.

IN WITNESS WHEREOF, I have hereunto set my hand this thirtieth day of April, in the year of our Lord two thousand nineteen, and of the Independence of the United States of America the two hundred and forty-third.