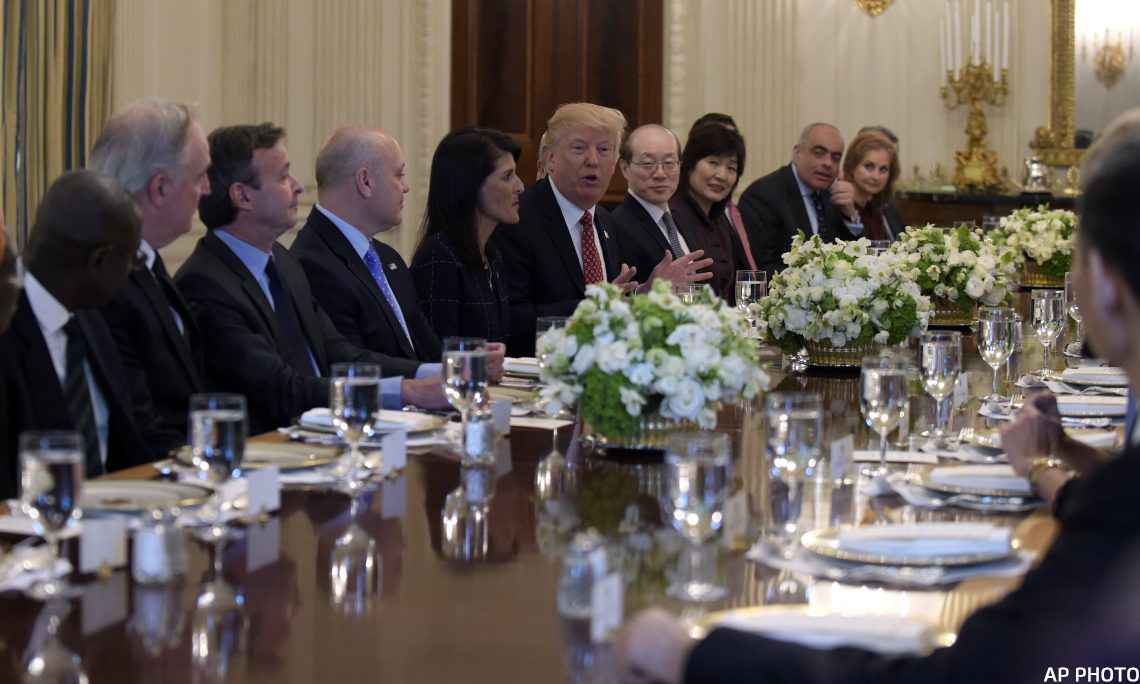 President Donald Trump, sitting next to U.S. Ambassador to the UN Nikki Haley, speaks during a working lunch with ambassadors of countries on the United Nations Security Council and their spouses, Monday, April 24, 2017, in the State Dining Room of the White House in Washington. (AP Photo/Susan Wals

THE PRESIDENT:  This is a very, very important and powerful group of people, and it’s really wonderful to have you with us.  And I have to say, welcome to the White House.  It’s a privilege to have all of the ambassadors and their spouses.  You know, they were going to leave out the spouses, and I said, you must bring your spouses.  (Laughter.)  You know, I heard there were a lot of very angry spouses — (laughter) — and this is their first time to the White House.  So it’s a great honor to those of you that brought your wife or spouse.

As you know, the United States holds the presidency of the Security Council this month, and I’m glad that we are continuing the tradition of hosting the Council’s ambassadors in our nation’s capital.  It’s our great honor, believe me.

I want to thank Ambassador Nikki Haley for her outstanding leadership, and for acting as my personal envoy on the Security Council.  She’s doing a good job.  Now, does everybody like Nikki?  Because if you don’t — (laughter) — otherwise, she can easily be replaced.  (Laughter.)  No, we won’t do that, I promise.  We won’t do that.  She’s doing a fantastic job.  And everyone, I see — even as we took pictures before — the friendship that you’ve developed, all of you together.  That’s really a fantastic thing.

The mission of the United Nations and the U.N. Security Council is to maintain international peace and security.  These are important aims and shared interests.  But as we look around the world, it’s clear that there is much work for you to achieve.  You’re going to be very busy people, I suspect, over these coming months and years.

Our nation faces serious and growing threats, and many of them stem from problems that have been unaddressed for far too long.  In fact, the United Nations doesn’t like taking on certain problems.  But I have a feeling that people in this room — and I know for a fact that Nikki feels very, very strongly about taking on problems that really people steered away from.

I encourage the Security Council to come together and take action to counter all of these many threats.  On Syria, the Council failed again this month to respond to Syria’s use of chemical weapons.  A great disappointment; I was very disappointed by that.

The status quo in North Korea is also unacceptable, and the Council must be prepared to impose additional and stronger sanctions on North Korean nuclear and ballistic missile programs.  This is a real threat to the world, whether we want to talk about it or not.  North Korea is a big world problem, and it’s a problem we have to finally solve.  People have put blindfolds on for decades, and now it’s time to solve the problem.

For the United Nations to play an effective role in solving these and other security challenges, big reforms will be required.  In addition, we must also take a close look at the U.N. budget.  Costs have been — absolutely gone out of control.  But I will say this:  If we do a great job, I care much less about the budget, because you’re talking about peanuts compared to the important work you’re doing.  You really are.  You’re talking about the most important things ever.  And I must say, I’m a budget person.  You see the way I’m talking about NATO, the same thing, but if you do a great job at the United Nations, I feel much differently about it because we’re talking pennies compared to the kind of lives and money that you’ll be saving.

The United States, just one of 193 countries in the U.N., pays for 22 percent of the budget and almost 30 percent of the United Nations peacekeeping, which is unfair.  We need the member states to come together to eliminate inefficiency and bloat, and to ensure that no one nation shoulders a disproportionate share of the burden militarily or financially.  This is only fair to our taxpayers.

I look forward to a productive discussion about our shared role in keeping the peace, advancing reforms, and getting everyone to do their fair share.

I also want to say to you that I have long felt the United Nations is an underperformer but has tremendous potential.  There are those people that think it’s an underperformer and will never perform.  I think — and I think especially I’m so happy with the job that Nikki is doing and our representatives — but Nikki and the group — and I see the relationship that she has already developed.

So I see fantastic potential and fantastic things ahead for the United Nations.  And I have to say, it’s a tremendous honor to know you and to meet you.  And Nikki has given me a little briefing on each and every one of you, and I must tell you — I will tell you, you know, I’m a very blunt person, if she didn’t like I would tell you right now — (laughter) — but she gets along with everybody and respects everybody in this room.

Thank you all very much for being here.  It’s a great honor, and I’m glad you brought your spouses.  Thank you.  (Applause.)