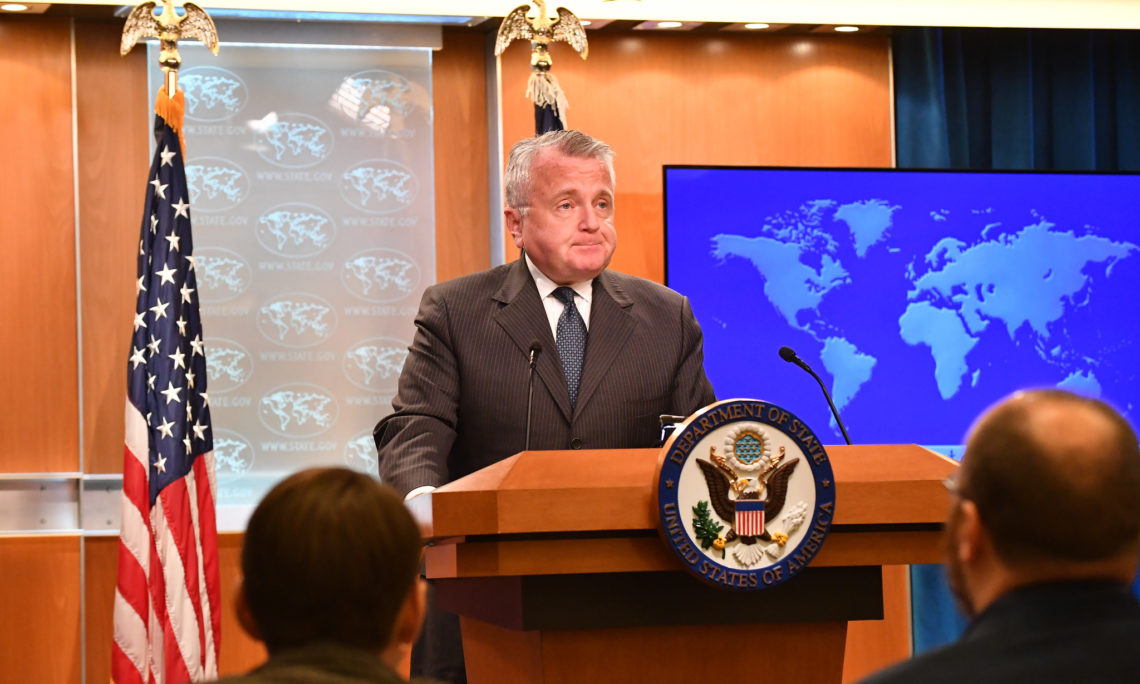 MS NAUERT: Good afternoon, everyone. Thank you so much for coming, especially on a Friday. Today the State Department released the 2017 Country Reports on Human Rights Practices. Promoting freedom – promoting and defending human rights and fundamental freedoms are central to who we are as a country, and the United States will continue to support those around the world struggling for human dignity and liberty.

This is the 42nd annual Human Rights Report that the department has now released. We’re delighted to have our Acting Secretary of State, John Sullivan, with us here today to say a few words about this report. After Acting Secretary Sullivan’s remarks, we will invite Ambassador Michael Kozak to the podium to answer some of your questions. I will help facilitate, as we all know one another, and assist with that.

Ambassador Kozak is a senior bureau official with the Bureau of Democracy, Human Rights, and Labor, and he’s looking forward to speaking with you shortly. He has served this department under Republican and Democrat administrations for 46 years, which is incredible. Sir, thank you for your service to the State Department.

And with that, I will hand over the podium to our Acting Secretary John Sullivan. Sir.

ACTING SECRETARY SULLIVAN: Thank you, Heather. Good afternoon, everyone. It’s an honor to be here to formally release the 2017 Country Reports on Human Rights Practices. Now in their 42nd year, these reports are a natural outgrowth of our values as Americans. The founding documents of our country speak to unalienable rights, fundamental freedoms, and the rule of law – revolutionary concepts at the time of our founding that are now woven into the fabric of America and its interests both at home and abroad.

Promoting human rights and the idea that every person has inherent dignity is a core element of this administration’s foreign policy. It also strengthens U.S. national security by fostering greater peace, stability, and prosperity around the world. The Human Rights Reports are the most comprehensive and factual accounting of the global state of human rights. They help our government and others formulate policies and encourage both friends and foes to respect the dignity of all individuals without discrimination.

This year, we have sharpened the focus of the report to be more responsive to statutory reporting requirements and more focused on government action or inaction with regard to the promotion and protection of human rights. For example, each executive summary includes a paragraph to note the most egregious abuses that occurred in a particular country, including those against women, LGBTI persons, persons with disabilities, indigenous persons, and members of religious minorities.

Before I turn the podium over to Mike, I’d like to discuss a few countries in particular, including some with the most egregious human rights records.

The entire world is aware of the horrendous human rights abuses in Syria, including barrel bombing of civilians, attacks on hospitals, widespread reports of rape and abuse by Syrian Government personnel. A week ago, the President took action, together with our French and British allies, to deter the use of chemical weapons and protect the human rights of Syrian civilians.

We condemn the ethnic cleansing of Rohingya in Burma and the atrocities committed against them, and we are working with partners to address that crisis. More than 670,000 Rohingya have fled to Bangladesh in recent months. Hundreds of thousands of civilians have been internally displaced. Those responsible for the violations, abuses, and attacks must be held accountable.

The DPRK is one of the most repressive and abusive regimes in the world. As the report makes clear, the Kim regime systematically neglects the well-being of its people to underwrite and fund its illicit weapons programs via forced labor, child labor, and the export of North Korean workers.

China continues to spread the worst features of its authoritarian system, including restrictions on activists, civil society, freedom of expression, and the use of arbitrary surveillance. The absence of an independent judiciary, the government’s crackdown in independent lawyers, and tight controls on information undermine the rule of law. We’re particularly concerned about the efforts of Chinese authorities to eliminate the religious, linguistic, and cultural identities of Uighur Muslims and Tibetan Buddhists, as well as restrictions on the worship of Christians.

The Iranian people continue to suffer at the hands of their leaders. The right of peaceful assembly and freedoms of association and expression are the legitimate expectation of all individuals worldwide. Unfortunately for the Iranian people, these human rights are under attack almost daily.

In Turkey, the detention of tens of thousands of individuals, including journalists and academics, under an ongoing state of emergency has undermined the rule of law there.

In Venezuela, the Maduro regime represses the human rights of its people and denies them the right to have a voice in their government. Thousands flee their homes daily in response to this growing humanitarian crisis. At the Summit of the Americas last week, Vice President Pence announced $16 million in humanitarian aid from the United States to help those who have fled Venezuela, are in – and are in desperate need of food, water, and medical help. We stand by the Venezuelan people even as their leaders refuse to allow aid into the country.

Finally, the Russian Government continues to quash dissent and civil society, even while it invades its neighbors and undermines the sovereignty of Western nations. We once again urge Russia to end its brutal occupation of Ukraine’s Crimean Peninsula, to halt the abuses perpetrated by Russian-led forces in Ukraine’s Donbas region, and to address impunity for the human rights violations and abuses in the Republic of Chechnya.

That’s a brief overview of the factual reports on countries of most concern. I know that Ambassador Kozak will be happy to answer any questions you may have, but before I turn the podium over to him, let me note at least a few bright spots.

Uzbekistan – although there’s still much progress to be made, the country has pursued a strategic reform agenda with positive effects on human rights, including the release of eight high-profile prisoners last year.

In Liberia, the recent presidential election represents a milestone marking the first peaceful transition from one democratically elected leader to another in more than 70 years.

In conclusion, let me say America leads the way globally to promote human rights. We will also continue to impose consequences on those who abuse human rights. Over the past year, through the Russia Magnitsky and Global Magnitsky sanctions programs, we have undertaken some of our most aggressive measures yet. No human rights abuser, no matter where in the world, is out of our reach. The Human Rights Reports are a significant part of that overall effort. Creating them is an enormous undertaking and not for the fainthearted. I’m grateful to so many of my colleagues in the State Department, including those here in Washington and many others in embassies and consulates around the world, who’ve made these reports possible and contribute to America’s longstanding leadership in promoting human rights.

So with that, I’d like to turn the podium over to Acting Under Secretary Nauert and to my friend and colleague, Ambassador Mike Kozak. Thank you.