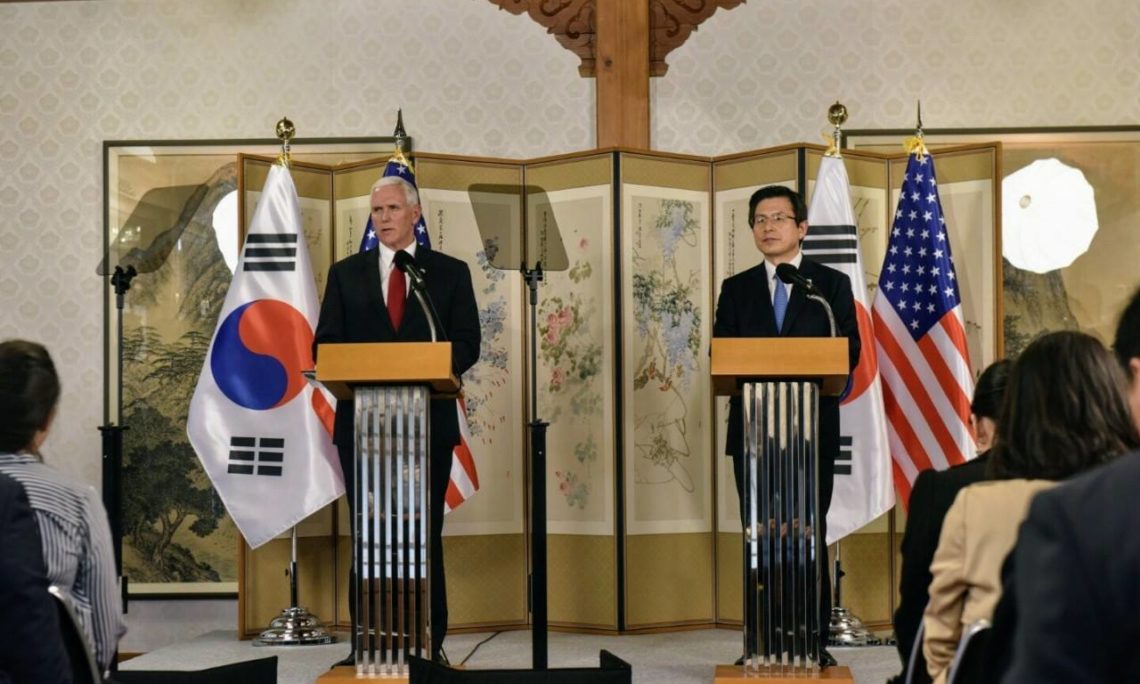 Remarks by the Vice President and Sou

ACTING PRESIDENT HWANG:  (As interpreted.)  Good afternoon. First of all I would like to wholeheartedly welcome Vice President Pence on his first visit to Korea, and I would also like to extend my warmest welcome to his family and delegation.

Vice President Pence’s late father was a Korean War veteran who had devoted himself to the defense of our freedom and democracy during the Korean War.  And this morning, Vice President Pence visited the Demilitarized Zone to inspect our stalwart combined defense posture and reconfirm our strong will to deter North Korea. This symbolizes not only a special personal tie, but also the depth and sturdiness of our alliance that has lasted over 60 years.

In particular at this time when the security situation on the Korean Peninsula is dire due to North Korea’s nuclear and missile provocations, Vice President Pence’s visit to Korea as his first destination in Asia since taking office shows the firm stance of the new U.S. administration on developing our alliance and responding to North Korea’s nuclear and missile threats.  As such, I believe Vice President Pence’s visit is timely and meaningful.

Today, the Vice President and I shared the view that on the basis of close cooperation and collaboration, the ROK-U.S. alliance has grown into an indispensable linchpin for peace and security on the Korean Peninsula and in Northeast Asia, as well as a successful strategic alliance that works together to resolve global challenges.

We have also reconfirmed our unwavering will to continue to make our alliance even stronger through further cooperation in the areas of security, economy and trade, and global issues.
Ten days ago on April 10th, I spoke with President Trump on the results of the U.S.-China summit and ways to work together going forward.  Today with Vice President Pence we shared the understanding of the gravity and urgency of North Korea’s nuclear and missile threat and agreed to double our efforts to change North Korea’s strategic calculations by further tightening the global network of pressure on North Korea and thoroughly implementing sanctions under the unwavering principle of denying North Korea nuclear weapons.

At the same time in response to North Korea’s continuously advancing nuclear and missile threat, we have agreed to continue to pursue various measures to strengthen our deterrence capabilities and combined defense posture to include extended deterrence.  We have also agreed to further strengthen the readiness posture of the ROK-U.S. alliance in response to North Korea’s growing threat by ensuring the early deployment and operation of the USFK’s THAAD system.

In this respect I appreciate the United States taking a clear position on various occasions, including at the U.S.-China summit with regard to China’s unfair actions in connection with USFK’s deployment of THAAD.  We have agree to continue to work together so that such unfair actions may come to an end at an early date.

Furthermore, we fully shared the view that in responding to and resolving such critical issues the watertight collaboration between our two countries is of the utmost importance, and that all future policies and measures will be made under totally seamless cooperation and coordination.

Furthermore, as global partners we have also agreed to work together to resolve global issues.

It is truly meaningful that close cooperation and collaboration has continued to develop since the launch of the new U.S. administration. And I am confident that today’s meeting with Vice President Pence will serve as yet another meaningful occasion for the further development of the ROK-U.S. alliance.

To Acting President Hwang Kyo-ahn, thank you for the kind words and the hospitality you have shown me and my family in welcoming us to the Republic of Korea, my very first stop in the Asia Pacific as Vice President of the United States.

President Trump and I are grateful for your strong partnership with the United States.  We commend you personally for your steady hand in this time of transition in South Korea.   The President and our entire administration admire the South Korean people’s commitment to the rule of law and the democratic process — and we look forward to the upcoming election with great anticipation.

While change is coming on May 9th, the people of South Korea may be assured — whatever change happens in your elections, the commitment of the United States to South Korea’s safety and security will remain unchanged.

On behalf of the President of the United States, my message to the people of South Korea is this:  We are with you 100 percent.  Even in these troubled times, we stand with you for a free and secure future.

The United States of America stands shoulder-to-shoulder with the Republic of Korea, and the service and vigilance of some 37,500 U.S. soldiers, sailors, airmen, and Marines on this frontier of freedom stand as a testament to the enduring partnership between our people.

The alliance between South Korea and the United States is the linchpin of peace and security on the Korean Peninsula and indeed throughout the Asia Pacific.

The United States’ commitment to South Korea is ironclad and immutable.  And under President Trump’s leadership, I know our alliance will even be stronger, our nations will be safer, and the Asia Pacific will be more secure.

Nowhere is that more evident than with our commitment to confront the region’s most dangerous and urgent threat to peace and security — the regime in North Korea.

Since 1992, the United States and our allies have stood together for a denuclearized Korean Peninsula.  We hope to achieve this objective through peaceable means.  But all options are on the table.

Just in the past two weeks, the world witnessed the strength and resolve of our new President in actions taken in Syria and Afghanistan.  North Korea would do well not to test his resolve — or the strength of the Armed Forces of the United States in this region.

We will continue to deploy the THAAD missile-defense system as a defensive measure — called for by the alliance, and for the alliance. We will continue to evolve a comprehensive set of capabilities to ensure the security of South Korea.  And as our Secretary of Defense made clear here in South Korea not long ago, we will defeat any attack, and we will meet any use of conventional or nuclear weapons with an overwhelming and effective response.

Strategic patience has been the approach of the last American administration and beyond.  For more than two decades, the United States and our allies have worked to peacefully dismantle North Korea’s nuclear program and alleviate the suffering of their people. But at every step of the way, North Korea answered our overtures with willful deception, broken promises, and nuclear and missile tests.

Over the past 18 months, North Korea has conducted two unlawful nuclear tests and an unprecedented number of ballistic missile tests, even conducting a failed missile launch as I traveled here for this visit.

The era of strategic patience is over.

Earlier this month, President Trump spoke with you, Acting President Hwang, to reaffirm the strength of our alliance.  As I reassured you today, we will continue to closely consult with South Korea and your leadership as we make decisions moving forward.

We also call on other regional powers and the entire international community to join us to confront North Korea and demand that it abandon its nuclear and ballistic missile programs, to turn away from renewed hostility towards its neighbors, and to end the repression of its own people.

Earlier this month, President Trump met with Chinese President Xi at the Southern White House.  The two leaders noted the urgency of the threat posed by North Korea’s weapons programs and each of them reaffirmed their commitment to a denuclearized Korean Peninsula during that meeting on April 7th.

It is heartening to see China commit to these actions.  But the United States is troubled by China’s economic retaliation against South Korea for taking appropriate steps to defend itself.  The better path would be for China to address the North Korean threat that is actually making such defensive measures necessary.

So today it is my privilege, on behalf of President Trump, to reaffirm the United States’ enduring commitment to the security and prosperity of South Korea and to assure the people of South Korea of our unbreakable bond.  We are bound together by our shared values, but also by our shared sacrifice.  A free and democratic South Korea was forged in the fires of sacrifice by soldiers from both our lands. And my father was one of them.

Sixty-five years ago, Second Lieutenant Edward J. Pence, of the 45th Infantry Division in the United States Army, fought alongside brave South Korean forces, to win the freedom of this land.

While he came home to raise a family, he had friends in uniform, from America and Korea, who went home to eternity.  So, too, the friendship between our two free nations is eternal.  We have bled together.  We have prospered together.  And on that foundation, the people of the United States of America and South Korea, will face the future together.

With courage, determination, and faith — we go together –Katchi Kapshida.

So thank you, Mr. Acting President, for your hospitality.  It is a great, great honor to be with you today.  (Applause.)