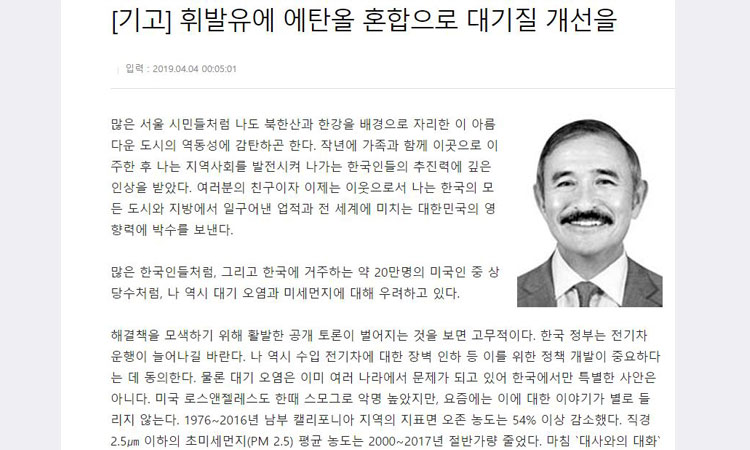 Harry Harris, U.S. Ambassador to the Republic of Korea
April 4, 2019

Like so many other Seoulites, I appreciate the dynamism of this beautiful city set amid the backdrop of Bukhansan and the Han River.  Since my family and I moved here last year, I’ve come to appreciate the drive that Koreans have to improve their communities.  As your friend and now neighbor, I applaud the triumphs achieved in every city and province of this country and the impact the Republic of Korea has made globally.  Like many Koreans – and many of the nearly two hundred thousand Americans who have made Korea their home – I am concerned about air pollution and fine dust.  The lively public debate about finding solutions is encouraging.  The Korean government wants more electric vehicles on the road.  I agree and think it’s important that policies be developed to deploy them faster, including reducing barriers for foreign-made e-vehicles.

Of course, Korea is not unique as air pollution challenges many countries.  In the United States, Los Angeles at one time was notorious for its smog, but we don’t hear so much about that these days.  Between 1976 and 2016, ground level ozone pollution decreased by over 54 percent across the Southern California region.  Average concentrations of particulate matter 2.5 microns in size (PM2.5) dropped by almost half between 2000 and 2017.  I was just in Denver with ROK Ambassador to the United States Cho Yoon-je as part of the Ambassadors’ Dialogue program, and we learned that air pollution is becoming an issue in the great state of Colorado.  Colorado is taking aggressive steps to get ahead of this by shifting to renewable energy and electric vehicles.  Korea can do the same.

Since the 1970s, American communities have reduced air pollution through legislation, monitoring, and innovative solutions, all while growing the U.S. economy.  While data on its impacts on air pollution is being further developed, adding ethanol to gasoline may help reduce emissions of some toxins.  And, as you know, there are millions of Kias and Hyundais on America’s streets, and they’re all running on ethanol blends.

There is no mystery about ethanol – it’s a renewable fuel produced from plants, most commonly sugarcane, sorghum, or corn.  In the past few decades over 60 countries, including the United States and much of Europe, adopted policies promoting ethanol and other biofuels.  In this region alone, China, Japan, India, the Philippines, and Vietnam use ethanol-blended fuels.  A key reason for this tilt is that ethanol can be incorporated on a mass scale with minimal changes to existing infrastructure.  Good news — as global demand for ethanol increases, so, too, is supply.  In fact, we’re seeing an ever-expanding global supply of ethanol, including from the United States.  Ethanol, of course, is not a silver bullet to solve this multifaceted environmental problem but, taking into account our experience in the United States and other countries, it’s worth strong consideration.

We all know that reducing air pollution is complex.  I applaud Korea’s effort to address this pressing challenge.  The Korean government just took an important step in the right direction by lowering taxes on liquefied natural gas imports by 84 percent.  I am also pleased that our Embassy has facilitated consultations between U.S. and Korean counterparts, including the comprehensive 2016 Korea – United States Air Quality Study led jointly by NASA and the Korean National Institute of Environmental Research.