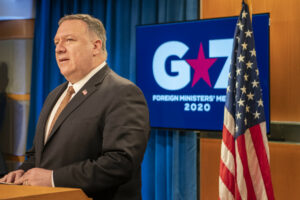 First, we spent a substantial amount of time on threats posed by authoritarian states.  The Chinese Communist Party poses a substantial threat to our health and way of life, as the Wuhan virus outbreak clearly has demonstrated.  The CCP also threatens to undermine the free and open order that has underpinned our mutual prosperity and safety in the G7 countries.

I urged every one of the countries to work together to protect the UN and other organizations from its malign influence and authoritarianism.  We G7 countries must promote our shared values of freedom, sovereignty, good governance, transparency, and accountability, and push the UN to uphold these principles as well.

Our pressure campaign remains designed to induce Iran to act like a normal country.  I urged our G7 partners to go further in joining us – and they should especially stand with the U.S. in ensuring that Iran never obtains a nuclear weapon.

Similarly, the G7, and all nations, must remain united in calling on North Korea to return to negotiations, and stay committed to applying diplomatic and economic pressure over its illegal nuclear and ballistic missile programs.

SECRETARY POMPEO:  So let me take the first question to begin with.  We’ve wanted to work with the Chinese Communist Party throughout this crisis – this crisis that began in Wuhan, China.  We tried – you’ll remember – from the opening days to get our scientists, our experts on the ground there so that we could begin to assist in the global response to what began there in China, but we weren’t able to do that.  The Chinese Communist Party wouldn’t permit that to happen.

You’ll recall, too, at the beginning of this, when it was clear that this was an issue, China knew about it, they were the first country to know about the risk to the world from this virus, and they repeatedly delayed sharing that information with the globe.

So yes, we desperately want to work with every country around the world.  This is a global pandemic; this is something the United States wants to work with every country, including China, to figure out how to resolve to keep as many people alive, as many people as healthy, and then to restore our economies that have been decimated by the Wuhan virus.

So we are – we are prepared to work with them, we’re prepared to assist them.  We want good things for the Chinese people as well.  This activity resulted in the deaths of lots of people in China as well.  It’s not just been something that is extraterritorial to China.  But it’s really important that we make sure we get this right.  There was a lot of discussion today amongst the G7 about the intentional disinformation campaign that China has been and continues to be engaged in.  You see it.  You see it in the social media.  You see it in remarks from senior people inside the Chinese Communist Party talking about whether this was a U.S. – U.S. brought to China.  I mean, this is crazy talk.  And every member of the G7 today saw that – this disinformation campaign.  China now making small sales of product around the world and claiming that they are now the white hat in what has taken place here.  This isn’t a time for blame; this is a time to solve this global problem.  We are focused on that today.  It’s where the G7 members spent all of their time.  But every one of the nations that was at that meeting this morning was deeply aware of the disinformation campaign that the Chinese Communist Party is engaged in to try and deflect from what has really taken place here.

We need to make clear that the information that is available to everyone in the world is available.  That means full transparency by everyone, including by the Chinese Communist Party.  This is a continuing challenge.  We still need good information from the Chinese Communist Party about what has taken place there and the level of the virus that continues inside of that country.