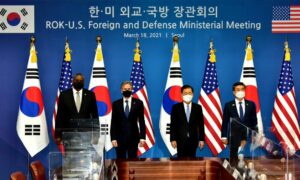 The following statement was released by the Governments of the United States and the Republic of Korea:

The Ministers and Secretaries reaffirmed that the ROK-U.S. Alliance, forged in blood on the battlefield 70 years ago, serves as the linchpin of peace, security, and prosperity on the Korean Peninsula and the Indo-Pacific region. Amid increasing global threats, the Alliance has never been more important.

They also acknowledged that the ROK-U.S. Alliance has developed into a comprehensive global partnership grounded in mutual respect and trust, close friendship, strong people-to-people ties, and shared values of freedom, democracy, human rights, and the rule of law. They vowed to further promote mutually-reinforcing and future-oriented cooperation across a wide range of areas encompassing a robust trade relationship, cooperation on combatting the climate crisis, and coordination on pandemic relief and post-COVID-19 economic recovery.

Both sides reaffirmed a mutual commitment to the defense of the ROK and to the strengthening of the ROK-U.S. combined defense posture, consistent with the ROK-U.S. Mutual Defense Treaty. U.S. officials reaffirmed the U.S. commitment to the defense of the ROK and its extended deterrence using the full range of U.S. capabilities. Both sides committed to strengthening the Alliance deterrence posture, and they reiterated the importance of maintaining joint readiness against all shared threats to the Alliance through combined training and exercises. Both Secretaries and Ministers noted that U.S. forces in the ROK continue to play a critical role in maintaining peace and stability on the Korean Peninsula and in the region, and committed to continuing to ensure that we have the force posture and capabilities necessary to meet our common challenges.

Both sides affirmed that the agreement in principle on a new multi-year Special Measures Agreement is a symbol of the shared commitment to the ROK-U.S. Alliance, supports the stable presence of U.S. forces stationed in Korea, and enhances our combined defense posture.

The Ministers and Secretaries noted that since both sides decided to pursue the transition of wartime Operational Control (OPCON) in 2006, the ROK and the United States have achieved great progress through their combined efforts and reiterated their firm commitment to wartime OPCON transition consistent with the Conditions-Based OPCON Transition Plan (COT-P). Building on this progress, the leaders pledged to continue efforts toward the transition.

The Ministers and Secretaries emphasized that North Korean nuclear and ballistic missile issues are a priority for the Alliance, and reaffirmed a shared commitment to address and resolve these issues.They affirmed the importance of full implementation of relevant UN Security Council resolutions by the international community, including North Korea. The ROK and the United States are closely coordinating on all issues related to the Korean Peninsula. Both sides shared the view that these issues should be addressed through a fully-coordinated strategy toward North Korea between the ROK and the United States. To this end, they committed to maintain high-level consultations on the United States’ ongoing North Korea policy review.

The Ministers and Secretaries affirmed the importance of ROK-U.S.-Japan trilateral cooperation and pledged to continue promoting mutually-beneficial, forward looking cooperation to promote peace, security, and prosperity in the region.

Against the backdrop of increasing challenges to the regional security environment, the shared values of the ROK-U.S. Alliance undergird the two countries’ commitment to opposing all activities that undermine and destabilize the rules-based international order. The ROK and the United States emphasized that they remain united in their shared commitment to maintaining peace and stability, unimpeded lawful commerce, and respect for international law. The ROK and the United States reiterated their resolve to continue to work together to create a free and open Indo-Pacific region through cooperation with the ROK’s New Southern Policy. The two countries are united in their dedication to support ASEAN centrality and other regional efforts. Both sides acknowledged the contributions of ongoing bilateral dialogues to expanding regional coordination with the Pacific Island countries and in the Mekong sub-region.

The Ministers and Secretaries emphasized the role that the ROK and the United States have played in nurturing partnership and cooperation in our collective response to an increasing number of global challenges. They committed to deepening cooperation across a range of areas including trade, health, non-proliferation, nuclear energy, COVID-19, combatting the climate crisis, space, and cybersecurity.

The Ministers and Secretaries emphasized that the ROK-U.S. Alliance—built upon shared values and bonded by trust— is stronger than ever. In this era of challenges and opportunities, the Ministers and Secretaries noted the dynamism, reciprocity, and boundless potential of the Alliance and reiterated their commitment to further advancing and deepening ROK-U.S. cooperation.