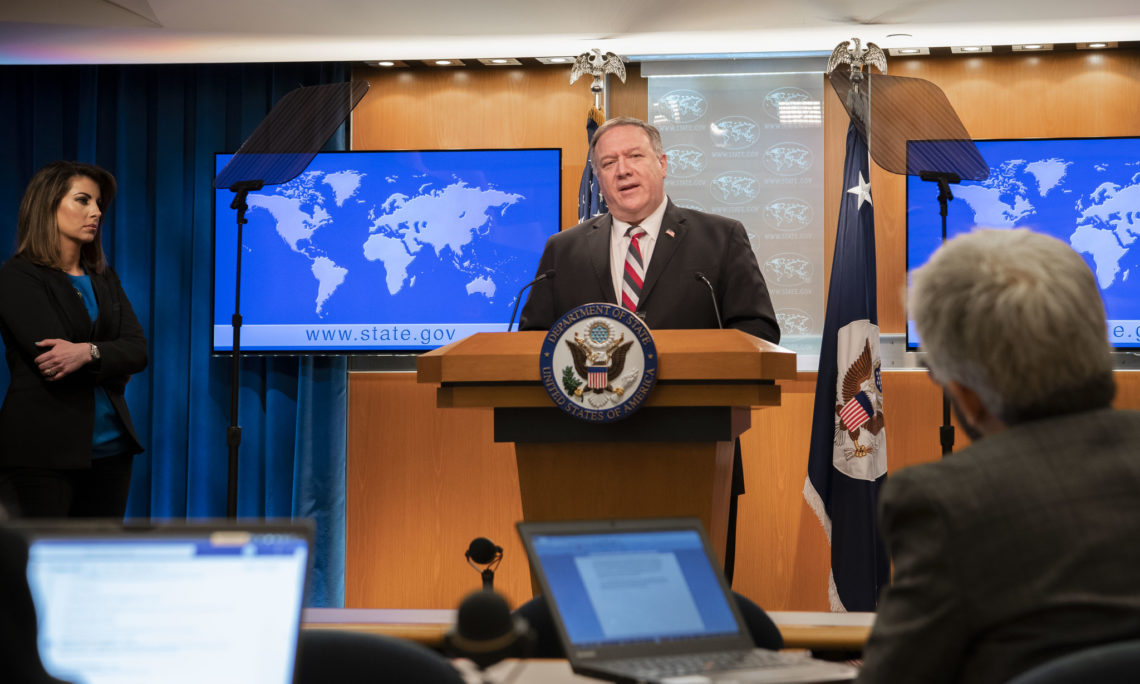 QUESTION: I was wondering if you could give us a more specific sense on how coronavirus has affected the State Department, how many employees have been tested, tested positive, quarantined, or teleworking?

SECRETARY POMPEO: So with respect to the State Department, we’re taking activities that have two objectives. First is to maintain our capability to deliver American diplomacy. We’ll never sacrifice that capability. Second, we want to protect our workforce so that they can continue to do that. We’ve taken many measures. We’ve issued I think it’s now some 15 guidelines. We’ve limited travel. You’ve seen the work that we’ve done here. We’ll continue to do that, we’ll continue to take care of our team, and we’ll act in a way that’s consistent with the CDC’s guidelines and the professional medical staff that works here at the State Department – who, by the way, has performed unbelievably. The work that our medical team has done, the work that we did to get Americans out of Wuhan, the work that we’ve done on these cruise ships to protect American lives, is in the finest tradition of American diplomacy. It’s truly some of the most amazing things I’ve seen State Department officers do during my time here as the Secretary. I’m so proud of the way the team has performed there. We have an obligation (inaudible) take care of them and all of our team, and we’ll continue to do that.

Your question about China – look, the disinformation campaign that they are waging is designed to shift responsibility. Now is not the time for recrimination. Now is the time to solve this global pandemic and work to take down risks to Americans and people all across the world. My team just got off the phone with the – our ambassador to Italy. The remarkable work our team’s doing there to help the Italian people would make every American proud. We’re doing this all across the world.

There will come a day when we will go evaluate how the entire world responded. We know this much: We know that the first government to be aware of the Wuhan virus was the Chinese Government. That imposes a special responsibility to raise the flag, to say, “We have a problem, this is different and unique and presents risk.” And it took an awful long time for the world to become aware of this risk that was sitting there, residing inside of China. We’ll do the after-action when the time is right. Every nation has a responsibility to share all of their data, all of their information in as timely and accurate a fashion as they have the ability to do not only because it’s the right thing to do, but because that’s how you save lives for your own people as well. The Chinese Communist Party had a responsibility to do this not only for Americans and Italians and South Koreans and Iranians who are now suffering, but for their own people as well.

QUESTION: (Inaudible) my questions now. I’m – seriously, I’d like to follow up on a colleague’s question and ask if anyone in this building or in the diplomatic corps overseas has tested positive for the virus, what you’re doing for those employees. And then at our embassies overseas, are we ramping up medical facilities? What is the plan to treat Americans in those countries since a lot of the flights have been canceled, the borders are closed? Are they getting sent testing kits? How is any of that working? And then I also have an Afghanistan question, but I can – that can wait.

SECRETARY POMPEO: So I don’t want to spend too much time talking about the intricacies of what the State Department’s doing. It is a rapidly evolving situation. I stay as current as I can on what our support team is doing for our team. State Department officials – and every American should know we’re going to do everything we can to take care of our team. We’ve had a couple of employees – count them on one hand – who have positive tests. We’ve handled those exactly the way we’re asking every American to respond to those wherever they find themselves in the world. And I’m mindful, too, as we work to make sure that we’re protecting our team, the State Department team, we have a responsibility to try and help American citizens wherever they are as well. So it’s not just about our officers serving in these distant places, protecting themselves and our team, but making sure we’re doing the right thing by the American people. You see our travel advisories as they go out, trying to make sure they’re in step with the latest data sets we have in each – not only in each country, but in every province, county, township. So we’re articulating them properly so that Americans make good decisions about whether they should or should not travel.

We’ve seen the guidance that says, boy, if you don’t have to go someplace, one ought not to. That’s Mike’s words, not the CDC’s. The American people should go read the actual guidance. But we’re all being mindful that this is a time that every American has a responsibility to do the right thing for themselves, for their family, for those around them, and for the community writ large. We’ll do that for our State Department officers too. We’ll do our best to make sure the State Department team both here in Washington and around the world is the safest we can possibly make them, while we still recognize we’ve got a mission to accomplish as well.

And just if I may, China has just announced that they will get the press cards from several American journalists in the next two weeks. Do you have any reaction to that?

SECRETARY POMPEO: Your third question was about the announcement that the Chinese Communist Party made today. Two things to say about that. First, in their statement they suggested somehow that the actions that we had taken here in America prompted this. This isn’t apples to apples. You all know the press freedoms you have. We were just joking about them, right. You all get to ask me whatever questions you want, and I give you the answer. We know that that kind of freedom doesn’t exist inside of China. Indeed, the Chinese will tell you that they want more information, people to know more about their country, and yet they continue to take actions like the one you see today, where they deny the world the capacity to know what’s really going on inside of their country.

The individuals that we identified a few weeks back were not media that were acting here freely. They were part of Chinese propaganda outlets. We’d identified these as foreign missions under American law. These aren’t apples to apples in any respect. And I regret China’s decision today to further foreclose the world’s ability to conduct free press operations, which, frankly would be really good for the Chinese people, really good for the Chinese people in these incredibly challenging global times, where more information, more transparency are what will save lives. This is unfortunate. We just saw it. I hope they’ll reconsider. [Full Text]