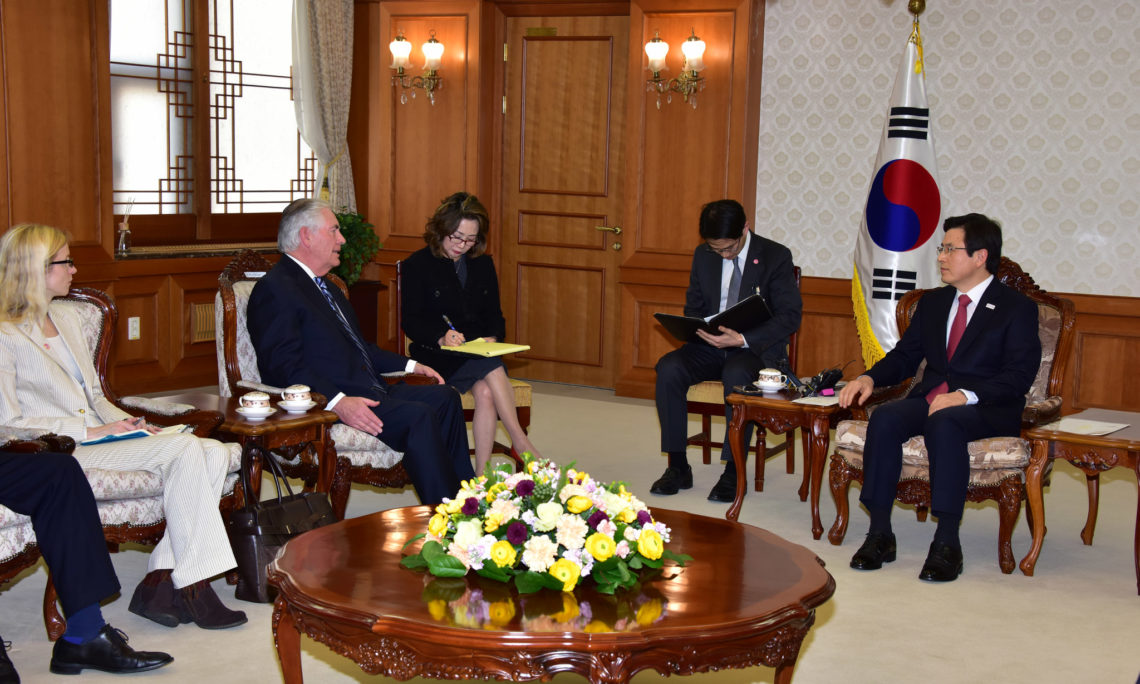 ACTING PRESIDENT HWANG: (Via interpreter) Nice to meet you.

SECRETARY TILLERSON: Nice to meet you.

ACTING PRESIDENT HWANG: (Via interpreter) So, first of all, I would like to welcome you on your first visit to Korea since assuming office. In the short time since President Trump’s inauguration, I have held — I have had two telephone conversations with President Trump, and Secretary of Defense Mattis has already visited Korea. And now, Mr. Secretary, you are here. I believe this is testament to the importance of the R.O.K.-U.S. alliance, and the close partnership that we enjoy.

In particular, your visit took place, as planned, despite the transitional situation in our domestic politics. I believe that this clearly shows that the United States is with Korea 100 percent, as President Trump has mentioned on numerous occasions.

And I heard that you visited the DMZ today. I hope you were able to experience firsthand the reality of the division of the Korean Peninsula and the gravity of North Korea’s threat. Also, I hope that, through your visit, we will be able to — this will serve as an opportunity to reconfirm our common will to maintain and develop a strong alliance, and a strong combined defense posture, as well as serve as an opportunity to hold in-depth discussions on the various issues.

SECRETARY TILLERSON: Well, thank you, Mr. President, for allowing me to come see you today. I am here to express, again, and reaffirm the ironclad alliance between the United States and the Republic of Korea, which does serve as the lynchpin for security and stability in the Korean Peninsula.

I also want to stress the importance of our strong and historic people-to-people ties, our growing economic cooperation, and, as you mentioned, our strong alliance around security in response to the growing threat from North Korea. I look forward to our discussions on how we can ensure a future that is secure, stable, and prosperous, not just for the Korean Peninsula, but for all of Northeast Asia.

ACTING PRESIDENT HWANG: (Via interpreter) Well, thank you for your insightful comments on the important aspects of the R.O.K.-U.S. alliance. (inaudible)