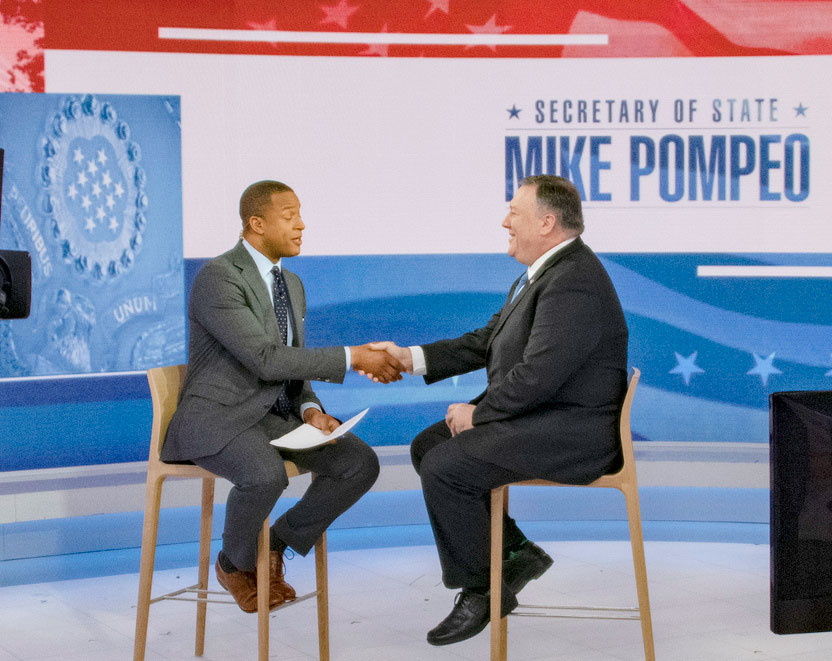 QUESTION: Thanks so much for your time.

QUESTION: This time next week, you will be in Vietnam with the President for the second summit with Kim Jong-un. After the first summit in Singapore, President Trump tweets out that North Korea no longer poses a nuclear threat. We know now, thanks to a preponderance of evidence, that’s not necessarily true – some of that evidence coming from the CIA, an agency you used to run. How would you characterize the North Korean threat as it stands today?

SECRETARY POMPEO: So the good news is, is they haven’t conducted missile tests or nuclear tests in now well over a year, so that’s better than the place that we found it when the Trump administration came into office. But as the President said yesterday and as the administration has said repeatedly, this is a long and difficult task. We’ve been negotiating hard. I have a team on the ground in Vietnam even today continuing to lay the groundwork for the summit next week in Hanoi, and I am very hopeful. I am hopeful that Chairman Kim will fulfill the promises that he made in Singapore in June of last year.

QUESTION: Any compromises on that?

QUESTION: South Korea’s President Moon Jae-in suggested a while back that one way to achieve that might be to officially declare an end to the Korean War, perhaps even reduce the number of troops that we have stationed in South Korea. Are either of those an option?

SECRETARY POMPEO: So it’s a really good question. Remember the objective – that’s the one that you laid out – is the complete, verifiable denuclearization of the peninsula and a brighter future for the North Korean people. I don’t want to get into the negotiations, what we might give up, what they might give up, but the American people should know we have the toughest economic sanctions that have ever been placed on North Korea, and we won’t release that pressure until such time as we’re confident that we’ve substantially reduced that risk.

QUESTION: It sounds like those are options that are on the table next week in Vietnam.

SECRETARY POMPEO: We’re going to engage in negotiations. The President will go there, and these two leaders, I hope, will make a truly historic step forward.

QUESTION: Let’s talk about Hoda Muthana for a moment here. This is the Alabama woman who left four years ago to join ISIS. She has a son. She said that she wants to come home now; she was radicalized, she made a big mistake. Yesterday, the President tweeted that he ordered you to not allow her to return. Your office said that she’s not a U.S. citizen. Her attorney says that she was born in 1984 in Hackensack, New Jersey. Why would we not want to bring her back to question her, perhaps even to try her?

SECRETARY POMPEO: Well, you have to remember the context. We have now taken down all but the last square inch of the caliphate in Syria and Iraq, millions of people liberated by President Trump and our administration, the great work that our soldiers have done on the ground. There are now over 800 terrorists that are being held, foreign terrorist fighters that are being held in Syria today. She is just one of them. She is a terrorist. She is not a U.S. citizen. She ought not return to this country.

QUESTION: So she wasn’t born here?

SECRETARY POMPEO: She may have been born here. She is not a U.S. citizen, nor is she entitled to U.S. citizenship.

QUESTION: Is that because she was the daughter of a diplomat and she was born here? Is that —

QUESTION: Okay. Let’s talk about Andrew McCabe. Perhaps you’ve heard he wrote a new book. He was here just a few days ago talking about the book. And in that book, there are several startling assertions. One of them – and he told this to Savannah just a couple of days ago – he said he was the one who ordered this counterintelligence investigation into the President. He was the acting FBI director, acting FBI director at the time. You were the acting CIA director at the time. Andrew McCabe also said that congressional leaders knew about this. Did you know about the counterintelligence investigation into the President?

SECRETARY POMPEO: So I really, I’ve watched a little bit of it. I haven’t probably followed this as closely as you had. I’ve been a bit busy. I find it sad Andrew McCabe has the IG from the organization he worked for forever declare that he wasn’t credible. And that’s unfortunate, so I don’t put a lot of stock into things Mr. McCabe said. My work at the CIA was always aimed at the singular purpose of keeping America safe. I don’t talk about investigations that we did or did not do. I did see some remarks about the 25th Amendment.

QUESTION: No knowledge about that?

SECRETARY POMPEO: I’ve been in the cabinet for – since almost opening day for the Trump administration. I mean, that’s just ludicrous. I’ve never heard any discussion about it by anyone, any of my fellow cabinet members, or anyone else that’s serving in the Executive Branch.

QUESTION: So you weren’t aware of the counterintelligence investigation?

QUESTION: Let’s talk about Venezuela. Of course, this weekend the deadline – we’re trying to get aid into this country. President Maduro has said that he is going to close the borders. He believes that it’s a pretext for a U.S. invasion. First of all, what is our national interest in Venezuela? And secondly, what do we expect to happen this weekend?

SECRETARY POMPEO: So this weekend we will attempt to deliver what are now hundreds of tons of humanitarian assistance that the American people, our taxpayers, have generously paid for, now have moved into the region. We hope we can get it across the border. There have been 3 million refugees have to leave the country. The humanitarian crisis is enormous. That’s always an American interest to try and make sure that we feed those that the – in this case the government causes. This is a wholly man-made catastrophe in Venezuela.

We have security interests too. This is in our region. We don’t want this to be a Cuban puppet state in Venezuela. So there are many American interests, and President Trump is determined to protect the American people and to provide humanitarian assistance in this true crisis.

QUESTION: While I have you really quickly, 2020 just around the corner. There has been some talk that perhaps Mike Pompeo might return to Kansas to run for an open Senate seat there.

SECRETARY POMPEO: I love Kansas. I’m going to be the Secretary of State as long as President Trump gives me the opportunity to serve as America’s senior diplomat.

QUESTION: No interest in being a senator from Kansas?

SECRETARY POMPEO: I love doing what I’m doing, and I have 75,000 great warriors out around the world trying to deliver for the American people.

QUESTION: It sounds like you’re not ruling it out.

QUESTION: Secretary Pompeo, thank you for your time. The Secretary goes, by the way, to Vietnam.

SECRETARY POMPEO: Thank you very much. Thank you, sir.