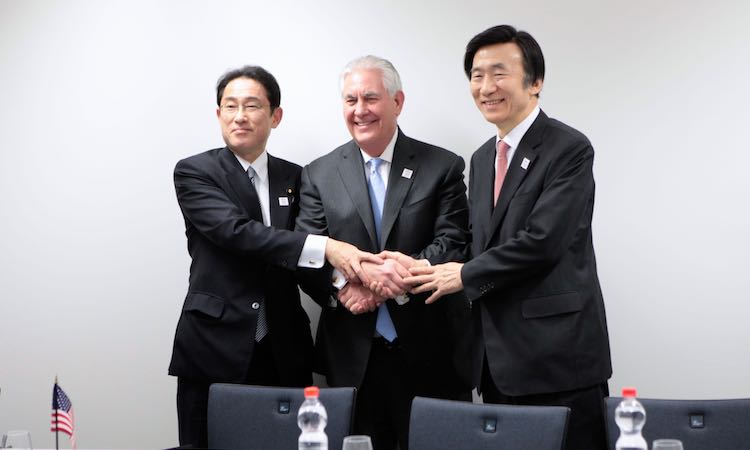 Secretary Tillerson reiterated that the United States remains steadfast in its defense commitments to its allies, the Republic of Korea and Japan, including the commitment to provide extended deterrence, backed by the full range of its nuclear and conventional defense capabilities.

The Ministers affirmed they will collaborate to ensure that all countries fully and effectively implement all their obligations and commitments under the relevant UN Security Council resolutions including Resolution 2270 and 2321, and that violations of UN Security Council resolutions by North Korea will be met with an even stronger international response. The Ministers noted that nations that border North Korea or are affected by the regime’s destabilizing behavior all urge North Korea to refrain from provocative actions. The Ministers emphasized that North Korea must abandon its proscribed nuclear and ballistic missile programs in a complete, verifiable, and irreversible manner, and comply with all provisions of the relevant UNSC resolutions as a critical step in preserving regional stability. Only in this way can North Korea be accepted as a responsible member of the international community. The ministers also agreed to continue to draw international attention to the systemic, widespread, and gross violations of human rights in North Korea, and affirmed the importance of an early resolution of the abductions issue.

The Ministers directed their representatives on North Korea policy to hold consultations in the coming days regarding ballistic missile and nuclear challenges posed by North Korea. The Ministers agreed to continue their government efforts to enhance trilateral security cooperation in responding to North Korea’s nuclear and missile threat, fully implement UN Security Council resolutions, uphold the global nonproliferation regime, and lead a firm international response to any further violations by North Korea.