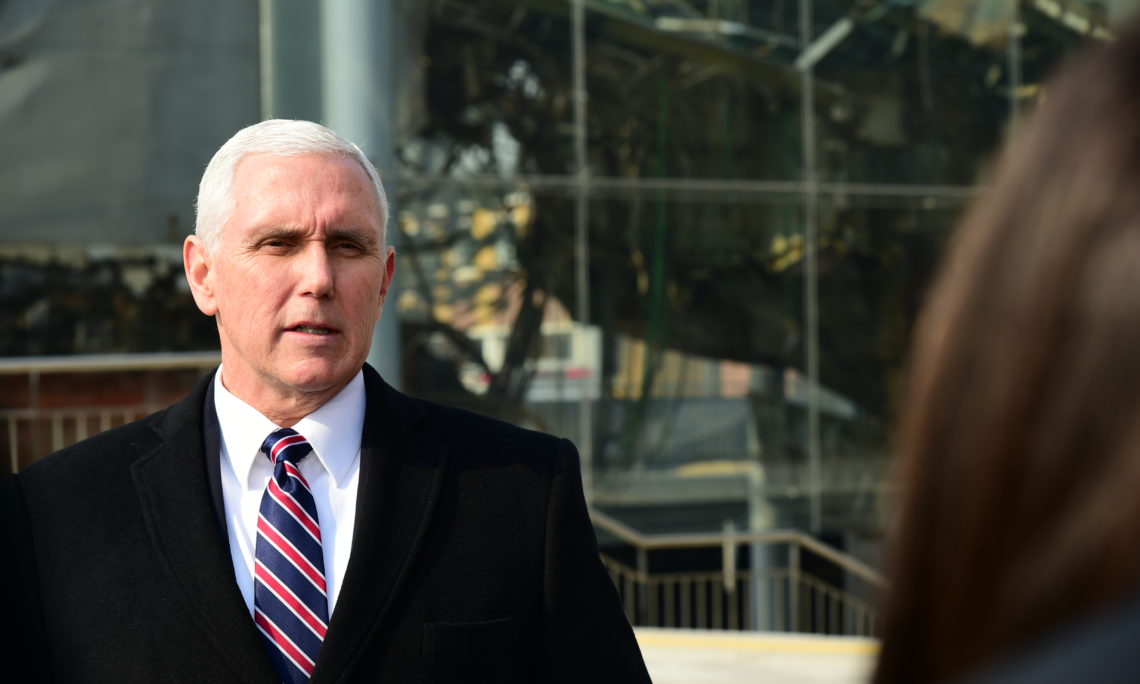 THE VICE PRESIDENT:  Well, thank you all for being here.  We’re rounding out a very productive start in South Korea.  Last night, we had a very substantive evening of discussions in our bilateral meeting with President Moon.  It was a strong affirmation of the unbreakable bond between the people of the United States and the people of South Korea, forged over the decades, forged in freedom.

And last night, we shared our common objective of confronting the regime in North Korea, whose militarism is on display behind me, until that time in which they permanently and irreversibly abandon their nuclear and ballistic missile program.

The Cheonan ship behind me was subject to a torpedo attack by North Korea in 2010.  And while the international community, and even the United Nations, confirmed that North Korea engaged in the attack, as I stand before you today, North Korea still refuses to accept responsibility for sinking this ship and costing 46 lives that we remember today.

Last night, with President Moon, we both reaffirmed our commitment to the denuclearization of the Korean Peninsula.  And President Moon, as he said publicly, he also said privately to me that South Korea stands shoulder-to-shoulder with the United States and our allies in continuing to isolate South Korea [North Korea] economically and diplomatically.

President Moon reaffirmed to me his strong support of our extreme pressure campaign to continue to bring additional sanctions on North Korea — sanctions that, as President Moon acknowledged last night, he truly believes have resulted in the inter-Korean dialogue over the Olympics that’s taking place today and will be in high relief starting tonight.

He credited once again President Trump for his international leadership in bringing the global community together around those new sanctions.  And we spoke about the President’s decision to implement a whole new range of sanctions, the largest range of American sanctions ever.  And we talked about working closely together with South Korea as I did in Japan, with ensuring that those sanctions are faithfully implemented.

So I’m grateful for the strong relationship between the United States and South Korea, evidenced in our discussion.  I look forward to this evening with the opening of the Olympic Games.

But we thought it was important to be here today to sit with defectors who have escaped the most tyrannical regime on the planet, to hear their stories, and to see the tears in their eyes, and then also to see the aftermath of the militarism that was once again on display in Pyongyang yesterday with one more military parade, with soldiers marching in line and ballistic missiles being proudly displayed.

The simple truth is that the time has come for North Korea to permanently abandon its nuclear and ballistic missile ambitions, to recognize there is no future as a member of the family of nations for a nuclear-empowered North Korea.  And we’re going to stand solidly with South Korea and with all of our allies to continue to bring the pressure to bear, to bring that change about so that days like this never happen again, and that the ongoing provocations and threats that come from the regime in Pyongyang, with ballistic missiles and nuclear weapons, finally comes to an end.

Q    Mr. Vice President, you just mentioned the military parade yesterday, but back home, President Trump ordered up a military parade of his own.  So I’m wondering, do you worry that undermines your moral high ground here as you’re trying to combat North Korean propaganda?  And also, do you personally believe such a military parade through Washington, D.C. or anywhere in the nation is appropriate?

THE VICE PRESIDENT:  I think any opportunity that we have to celebrate the men and women of the Armed Forces of the United States is a great day, and I heartily support the President’s call to celebrate our military.

Make no mistake about it: What we witnessed in Pyongyang, and we witnessed again yesterday on the eve of the Olympics –what President Moon said last night he hopes would be an “Olympics of peace” — was once again an effort on the part of the regime in Pyongyang to display their ballistic missiles, to display a military that continues to make menacing threats across the region and across the wider world.

Yesterday’s display was all one more part of an ongoing provocation.  But I think in the United States of America, just as in France, where the President was impressed on Bastille Day, we can celebrate our troops and not in any way ever be associated with the provocations of the North.

Q    Mr. Vice President, you said last night President Moon told you he supported further sanctions on North Korea.  Before the meeting, he said publicly that he wants the Olympics to be the start of a new dialogue leading to new negotiations.  Are you open to that?  And under what terms would the United States support this progression from Olympic engagement to actual dialogue?

THE VICE PRESIDENT:  President Moon and President Trump are completely aligned in their objective for a nuclear-free Korean Peninsula.  I heard that publicly when you were in the room.  I heard that extensively, privately, in our bilateral meeting and over dinner.

There is no daylight between South Korea and the United States.  We don’t want to repeat the mistakes of the past —   President Moon and I reflected on that last night — and that denuclearization has to be the starting point of any change, not the end point of any change.

Over the last 20 years, we’ve seen North Korea walk the world community away from the kind of pressure that we have brought in an unprecedented way, economically and diplomatically.  We’ve seen them buy time for their nuclear ambitions.

And President Moon and I reflected last night on the need to do something fundamentally different, and that is demand at the outset of any new dialogue or negotiations that the Kim regime put denuclearization on the table and take concrete steps with the world community to dismantle, permanently and irreversibly, their nuclear and ballistic missile programs.  Then, and only then, will the world community consider negotiating and making changes in the sanctions regime that’s placed on them today.

Q    Mr. Vice President, you said that South Korea and the U.S. share the same objective.  But the images of today that you have here with these — the aftermath of the attack and the heartbreaking stories you heard from these defectors, it’s a much different imagery than what we’re seeing in Pyeongchang with the kind of euphoria of the sister of Kim Jong-un visiting the Olympic Games and the meeting with President Moon, and now high-level Chinese officials might also be joining.

Are you concerned that your desire and efforts to keep the focus on North Korea’s actual behavior is being, kind of, drowned out a little bit by this Olympic fever and the whole promise of possible better relations between the North and South?

THE VICE PRESIDENT:  President Trump sent me to the region, as I said when we took off, to reaffirm the strong relationship between the United States, Japan, and South Korea; to cheer on all of our Olympic athletes.  And we look forward to starting that tonight.

But he also sent me here to make sure that as North Korea engages in what Prime Minister Abe rightly called a “charm offensive” around the Olympics — a charm offensive that they’ve done before at the Olympics in 2000, 2004 and 2006.  But as I mentioned earlier this week, it would just be a matter of eight months after the 2006 Winter Olympics that North Korea tested their first nuclear bomb.

So our objective here today is to stand with our allies, but it’s also to stand up for the truth, and to recognize that whatever images may emerge against the powerful backdrop and idealism of the Olympics, that North Korea has to accept change.  They have to abandon their nuclear ambitions.  They have to end the day of provocation and menacing.  And, frankly, they have to end an appalling record of human rights that you heard firsthand today.

And being here today, standing in front of the remains of North Korean aggression that cost the lives of 46 South Koreans, sitting this morning, movingly, with defectors who escaped that tyrannical regime, we believe is just the right message for the 17 days that lie ahead.

Q    Mr. Vice President, the government — the U.S. government shuts down in about five minutes or so, the second time in three weeks, under unified Republican control of Washington.  First, can you address that government shutdown and describe your efforts in the last few days?  Number one.  Number two, does this speak to your party needing to do more to prove to the American people and the world that it can govern effectively?

THE VICE PRESIDENT:  Well, we remain very hopeful, as the process goes forward, that this will only be a temporary government shutdown.  I know that the schedule in the Senate runs past midnight and that there likely will be a short-term shutdown.  But our hope is that the bipartisan agreement reached in the Senate will be passed out and sent to the House of Representatives.

I’ve been in touch with our legislative office.  The President and I have talked repeatedly about it.  We remain hopeful that the Congress will step up and provide for our military the resources that, frankly, previous Congresses and previous administrations have failed to provide.

You know, as I travel across this region and as I stood with our troops yesterday at Yokota Air Base, it is clear to us, while we have the strongest military in the history of the world, that that military has needs.  And President Trump has been fighting with the passage of the National Defense Authorization Act, with the passage of this long-term appropriations bill, to finally give our military the kind of resources and the kind of predictability and long-term budgeting that will make it possible, first, to really strengthen our national defense.

We think that message has gotten across to members of Congress.  We, frankly, are grateful for the bipartisan efforts that have been made to reach a two-year budget deal and to separate that from the contentious issues around immigration.  And we’re very hopeful that in the hours ahead we’ll see that budget passed and we’ll move forward with the kind of funding for our military and the kind of funding for our domestic needs in the long term that Congress hasn’t done for quite a while.

Q    Have you called any members?

THE VICE PRESIDENT:  I’ve been in touch with the legislative office, and the President and I have talked frequently, but we’re on standby as the vote approaches.