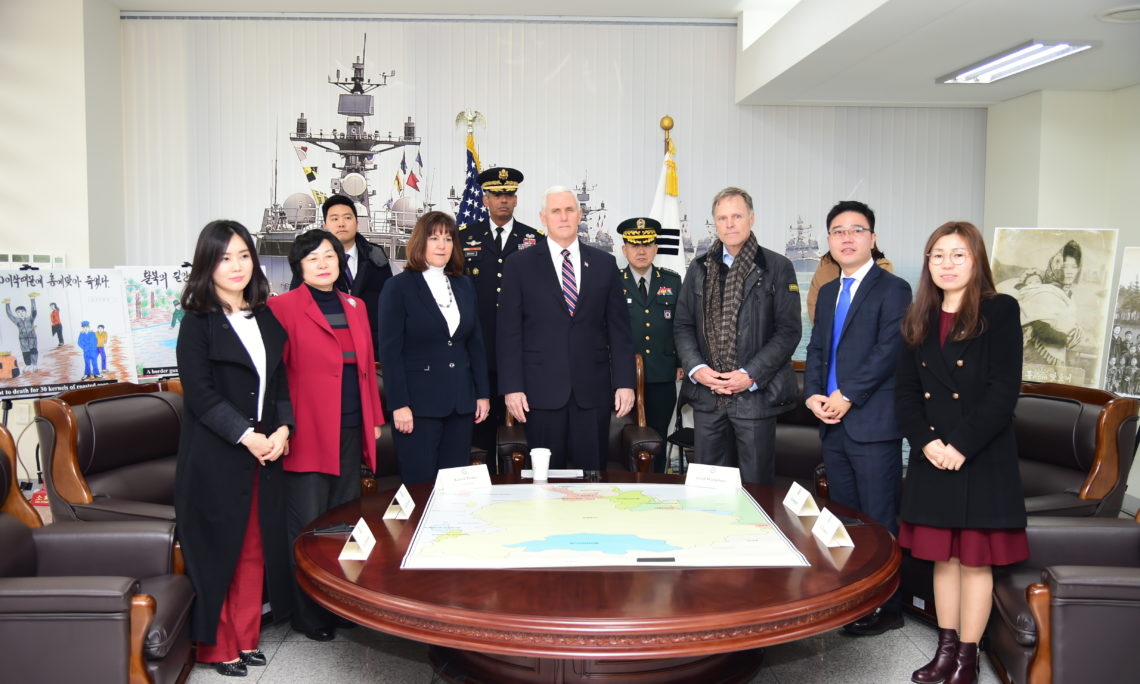 THE VICE PRESIDENT:  Well, thank you all for being here.  We’re very grateful for your presence.  We’re very grateful for your courage.  And on our second visit to Korea, my wife and I wanted the honor of meeting with men and women who fled the tyranny of North Korea, to hear your stories, and today, to make sure that the world hears your stories as well.

We’ve been inspired by your bravery.  We ourselves have stood and looked across the demilitarized zone, the line across which you fled, and you fled to freedom.  And let me just say that the American people stand with you for freedom, and you represent the people of North Korea, millions of which long to be free as well.

As we’ve said in other venues, as we speak, 100,000 North Koreans today labor in modern-day gulags.  Seventy percent of North Koreans need food aid to be able to survive.  Children face malnourishment and deprivation.  But we want to hear your stories.

And I’m honored to be joined today by a fellow American whose family endured the harsh reality of North Korea.  Fred Warmbier and his family have told the story of their wonderful son, Otto Warmbier, who was imprisoned in North Korea and released in such a condition that, by the time he made it home, he would pass way.

Fred is now a great champion for the North from which you fled and the freedom of the people there.  And it’s an honor to be with you today.

THE VICE PRESIDENT:  With that, I’m pleased to recognize four courageous people who are with us today: Hyesook, Hyeon-a, Hyeon-seo, and Seong-ho.

We look forward to a dialogue with you about tyranny from which you fled.  But beginning with Hyesook, maybe you could share briefly, before the media leaves, your story and your flight to freedom.

MS. KIM:  (As interpreted.)  I was incarcerated in a political prison, known as Number 18, for 28 years, without knowing as to why I was there.  And I survived from there.  But when I tried to escape, I was caught by a North Korean security guard, and that security guard sold me to a Chinese restaurant.  So I was forced to work there for three years and seven months, and then I was repatriated.

And so on my second attempt to flee — escape North Korea, I hired a North Korean broker.  And then, through that broker, I managed to come to South Korea back in 2009.

THE VICE PRESIDENT:  Thank you.  Hyesook, would you share with us your story?

MS. LEE:  First of all, I’m very pleased to be here.  Life as a North Korean defector is arduous.  After I escaped from North Korea, I was hiding in China for 11 years, almost, and I found my freedom finally eight years ago by seeking asylum to my divided country.

But before — first, I want to say that although the media is currently focusing on North Korea’s participation in these Olympics, but what we should never forget is the millions of North Korean people who are struggling to survive in this extremely cold winter in the north.  That’s my message today.

MR. JI:  (As interpreted.)  My name is Ji Seong-ho.  I used to be a street beggar in search of the food, and then I survived by trading coal for food.  And in 1996, I was trying to get coal, but I fell from the train.  And as a result, I lost my hand and my leg, and I had to go through a surgery with extreme pain.

THE VICE PRESIDENT:  Well, thank you for being here, and thank you for your courage.  It’s inspired millions across our country and across the world.

MS. JI:  (As interpreted.)  I’m a Christian, and when I was in North Korea, I came across a Bible.  And because I read the Bible, I was taken by the national security agency, and as a result, I decided to escape North Korea.  And it was back in 1998.  Afterwards, I made three more attempts, but every time I was forced to send back — forced to be back to — sent back to North Korea.  And I was successful on my fourth attempt.

THE VICE PRESIDENT:  Well, thank you for your testimony and faith, and for your courage.

THE VICE PRESIDENT:  I want to thank these courageous people for being with us today and help us to tell a story of a nation that much of the world will see tonight in the midst of a charm offensive by North Korea.

But today, we thought it was important to make sure that the truth was told.  As President Trump has said, the cruel dictatorship of North Korea is little more than a prison state.  And as these people and their lives have testified, it is a regime that imprisons, tortures, and impoverishes its citizens.  And I can assure you that your witness of that truth today will be heard across the world.  And we thank you for your courage, and we look forward to discussing — discussing it further.  Thank you all.

Mr. Warmbier is with us today, and he’s with you in spirit.  And maybe you’d like to share your thoughts.

MR. WARMBIER:  I would.  I would.  I’m so proud of you.  And your strength, it’s — I really appreciate that.  It’s hard — evil is hard to accept.  And I’ve experienced evil, and you have too.  And I just feel so much love and warmth for you all.  And I just can’t tell you how proud I am to be here with you.

So I have some things that I’d like to — if you would like, we can have a little fun, because I think it’s important to have fun, okay?