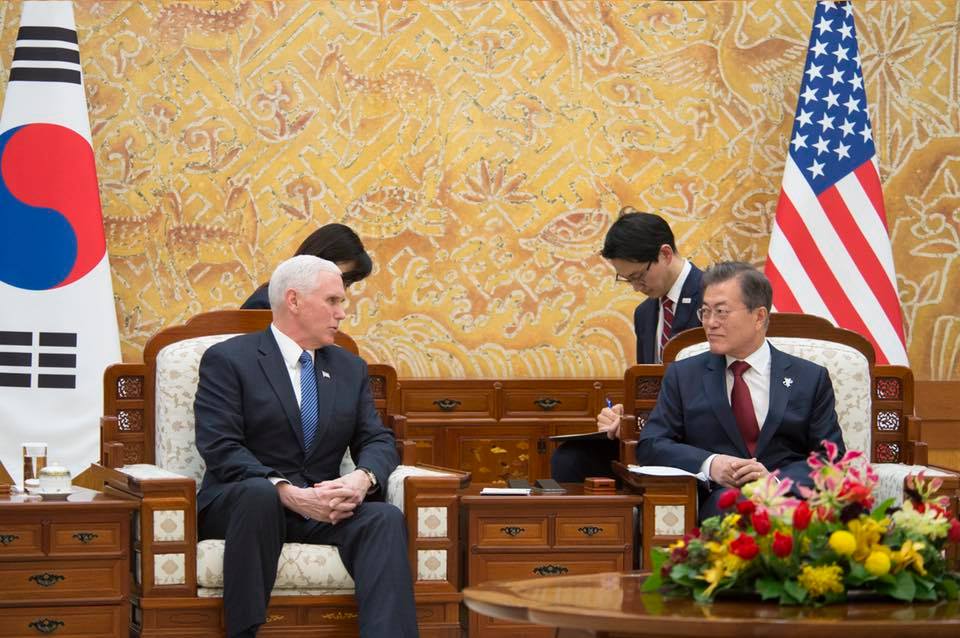 PRESIDENT MOON: (As interpreted.) First of all, I’d like to welcome the Vice President of the U.S. delegation to Korea. It is a great pleasure to be able to see you again, Mr. Vice President.

I remember, last July, when I visited the United States, you took time out of your very busy schedule to come with me to the Korean War Memorial — the memorial for the Chosin Reservoir Battle — and also hosted a luncheon for me at the White House. I was very thankful for your hospitality, and it is great to be able to pay it back.

And your visit this time with the high-level delegation of the United States has very special meaning to the people of Korea. I’m confident that your visit will serve as an opportunity to show to the entire world and to all Koreans the very strong relationship and alliance that we share, especially in light of the fact that it is following the visit — the state visit — of President Trump last year.

I am sure that President Trump’s active support and your strong will to travel so far to Korea, to Pyeongchang, to ensure that the Pyeongchang Winter Olympic Games become an Olympic Games of peace is of great encouragement to us all.

And also, on top of that, President Trump tweeted twice today wishing for a very successful Winter Olympic Games. I would like to thank you and President Trump once again.

And this Winter Olympic Games is the first multilateral international event taking place at a head-of-state level that I’m hosting since taking office last year. And during the Pyeongchang Winter Olympics, the South and North Korea, which are the directly affected parties of the Korean Peninsula, are both participating, as well as very high-level figures from the United States, as yourself, Japan, and China. And therefore, this is all the more meaningful — a meaningful event for us all.

I believe that it is thanks to the unwavering principle of the United States and the very strong and close coordination between Korea and the United States that enabled North Korea to come out to dialogue and to participate in the Pyeongchang Winter Olympic Games.

And we certainly hope to utilize this opportunity to the maximum so that the Pyeongchang Winter Olympic Games can become a venue that leads to dialogue for the denuclearization of the Korean Peninsula, as well as the establishment of peace on the Korean Peninsula.

And one thing that I would always like to emphasize is that the airtight cooperation between Korea and the United States is of the utmost importance. And I would also like to mention that this moment, with you and me together, this is the greatest testament to the great cooperation that we have between our two countries.

And I understand that the United States has sent the largest number of athletes during this Winter Olympics. I would like to wish Team USA the best of results.

And I look forward to frank discussions with you on various issues that include overall issues in our bilateral relationship as well as issues regarding the Korean Peninsula. Thank you.

VICE PRESIDENT PENCE: Well, thank you President Moon for the warm welcome. I am honored to join you for my first time at the Blue House and my second time, as Vice President of the United States, to the Republic of Korea.

Allow me to join President Trump in congratulating South Korea on what we know, in his words, “will be a magnificent Winter Olympics.”

As the President said in his visit to the Republic of Korea, South Korea is a testament to the power of freedom and the capacity of free peoples to create prosperity and security. And my presence here today — echoing the words that you just expressed, Mr. President — are to reaffirm the strong and unbreakable bond between the people of the United States of America and the people of South Korea.

For now nearly 70 years, our two nations have been joined together in peace and in prosperity, and in the security of both of our peoples in the Indo-Pacific. And to be able to be here, to be able to share this great moment in Pyeongchang with you and the people of South Korea is a great honor for me.

There are many issues to discuss. You’ve often spoken of them with President Trump. They have to do with the economic relationship between our two countries. But, of course, chief among the issues is our shared objective of the denuclearization of the Korean Peninsula.

And allow me to just assure you and the people of South Korea that the United States of America will continue to stand shoulder-to-shoulder in our effort to bring maximum pressure to bear on North Korea until that time comes when they finally and permanently and irreversibly abandon their nuclear and ballistic missile ambitions.

Mr. President, I can assure you and your people that our resolve to stand with you is unshakeable and we will stand with the people of South Korea and our other allies in the region until we achieve this objective for the peace of your nation, of this Peninsula, and for the wider world.

That being said, let me thank you again for your warm hospitality. My wife and I are very much looking forward to the evening together with you, and we’re looking forward to what we know will be an extraordinary Opening Ceremony in Pyeongchang tomorrow night.

Thank you again. And it’s a great, great privilege to be here.

PRESIDENT MOON: (As interpreted.) Thank you very much.